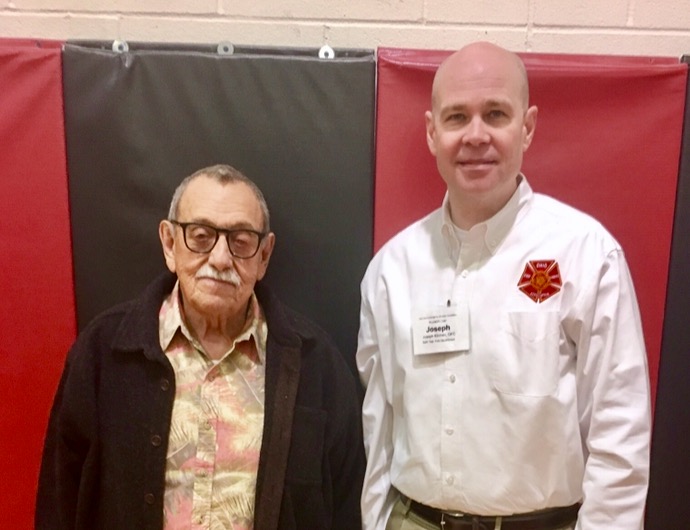 I first met Chief Brunacini many years ago at the famous Shapiro’s Delicatessen on Meridian St. in downtown Indianapolis during the Fire Department Instructors Conference (FDIC.) It was a short encounter with the basic exchange of obligatory pleasantries. I remember thinking afterward that it was a missed opportunity. I thought of all the things I should have asked him. I decided I would never let that happen again if the opportunity ever presented itself.

Fast forward to last weekend. As I waited in the hotel lobby for my friend Chief Andy Baillis Chief, I was reminded of that missed opportunity and thought, “How often do I have the chance to spend time with a legendary instructor like Chief Brunacini?” I told myself, “Don’t screw this up!”

As I am sure you know, Chief Alan Brunacini had a storied career with the Phoenix Fire Department. He is a well-known speaker, presenter, and instructor as well as a bestselling author. Thousands of career firefighters have studied his materials in preparation for promotional testing and his book “Essentials of Fire Department Customer Service” can be found on the bookshelf in most fire chiefs’ offices. Brunacini began his career in 1958 and now at nearly 80 years old, he is still dedicated to his beloved fire service.

So, I jumped into the backseat of Chief Baillis’ car and there he was! Brunacini was sitting in the front seat in his trademark glasses and Hawaiian print shirt. He immediately smiled and said, “Hello Chief!” Now, don’t get me wrong, he probably meets chiefs from all over the country and treats them all like he’s known them forever, but one can’t deny the instant connection and warmth you feel when you are with him. This guy really enjoys being around firefighters. You can truly sense he loves what he is doing.

On the way to dinner, we talked about the weather, his travel schedule, (he still travels to over forty speaking engagements a year,) and his family. It’s obvious he adores Rita, his wife of 58 years, and has a tremendous sense of pride that all three of his children followed him into the fire service. They have had notable careers of their own. He also speaks fondly of his little white dog, who he refers to as his “LWD.”

We arrived at Digsby’s Restaurant, owned by the local fire chief in the rural Ohio town of Seville. We met up with a few other local chiefs and embarked on a great evening of doing what fire chiefs do best…talking about fires, firefighters, and firefighting. I had the lasagna; the rest of the table had all-you-can-eat fish. The food was good; the table conversation was even better. One of the questions I had for Chief Brunacini was in regards to the new generation of firefighters, often referred to as “millennials.” I explained to him I often hear negative conversations from senior firefighters regarding these young employees and volunteers. They say they are lazy and entitled, with not much of a work ethic compared to yesterday’s generation. I told Chief Brunacini that I disagreed. I have been impressed with the millennials. I find them driven, caring, and compassionate. I added that they are far more committed to education and training than I was as a rookie, and that any bad habits they pick up are learned from within the organization. I could tell he was listening intently.I was pleased that he not only agreed, but added that our youngest firefighters are hungry, and we must feed them.

The next morning, I picked him up at his hotel to take him to the venue for the event. He was reading the paper and enjoying a cup of hot tea. He left warm and sunny weather in Phoenix for a cold morning in Ohio with a temperature of 12 degrees. He still wore his tropical print shirt, but under two coats, the outermost jacket emblazoned with the famous “Blue Card Command” logo. On our drive to the school, we didn’t talk about the fire service. Instead, the conversation turned to politics, another area of Chief Brunacini’s expertise. He spoke about his disappointment in the lack of civility and decorum of some of today’s politicians. We discussed the importance of being well-read and well-informed when you are in any type of leadership position. With a degree in political science, you quickly realize he is passionate about our country and its leadership.

Arriving at the venue, it didn’t take him long to ease into the role he loves. Although the class had an 8:00 A.M. start, he spent the first half hour talking to firefighters. He enjoys asking them questions and hearing their responses. He didn’t want to use the wireless microphone. There was no podium, and he never stepped foot on the stage. Instead, he pulled up a chair and just started talking. No notes or pre-planned materials; he just talked. He engaged every firefighter in the room. He talked one-on-one to every single person at the event, aptly titled, “Brunacini Live!” He wanted to hear of the fire chiefs’ problems. He asked, “What are the challenges of being a boss?” He asked, “What is the difference between the fire chief and the incident commander?” We discussed how bosses have changed. He encouraged us to talk to our young firefighters. He reminded us how important it is to “care” about our employees. Finally, that afternoon, he used a power point presentation. However, the slides were his handwritten notes on lined paper, neatly written with a black Sharpie marker. No doubt, he keeps things simple and to the point. There is nothing flashy about Chief Brunacini, but his message is powerful.

You never hear him refer to those we serve as “residents”, “tax payers”, “patients” or “victims.” Rather, he calls them “customers.” Chief Brunacini strongly believes that people will remember how you made them “feel” much longer than they will remember what you did. He went on to say that as fire chiefs, we are “behavioral health professionals,” whether we like it or not. When speaking of customer service and those “non-emergent” calls we often receive, he asked the group, “Have you ever fallen out of bed, unable to get up?” He asked us to think about how that must feel. These people are our customers.

He reminded us to focus on what we can control and accept what we can’t. He told us that this job isn’t easy. In fact, “If you are a boss, you’re going to get your a** kicked.” He talked about respect and how it’s earned. He also reminded us that our employees want to be included.

We talked at length about our “real” job. He reminded us of the Phoenix Fire Department mission statement: “Prevent harm; survive; be nice.”

I wrote down several of my favorite quotes from the class. Here are a few:

Chief Brunacini talks a great deal about expectations: yours, your firefighters, and your customers. We all have different expectations and it’s important to understand what those are. He certainly exceeded my expectations with his wisdom, humor, and thoughtful commentary on today’s modern fire chief. As we said our goodbyes, we exchanged contact information. We plan to meet up again in Indianapolis at FDIC. I am certainly looking forward to seeing him again.

I believe our profession is better today because of his contributions, as am I. He is truly an American fire service treasure.

Joseph Kitchen, OFC, is the Chief of the Bath Twp. Fire Dept. (Lima, Ohio.) He began his career in 1990 and has served as fire chief since 2002. He holds degrees in EMS and fire science, and in 2012 was named “Fire Officer of the Year” by the Ohio Dept. of Public Safety. Follow Chief Kitchen on Twitter @bathtwpchief and visit his department’s website at www.bathtwpfd.com