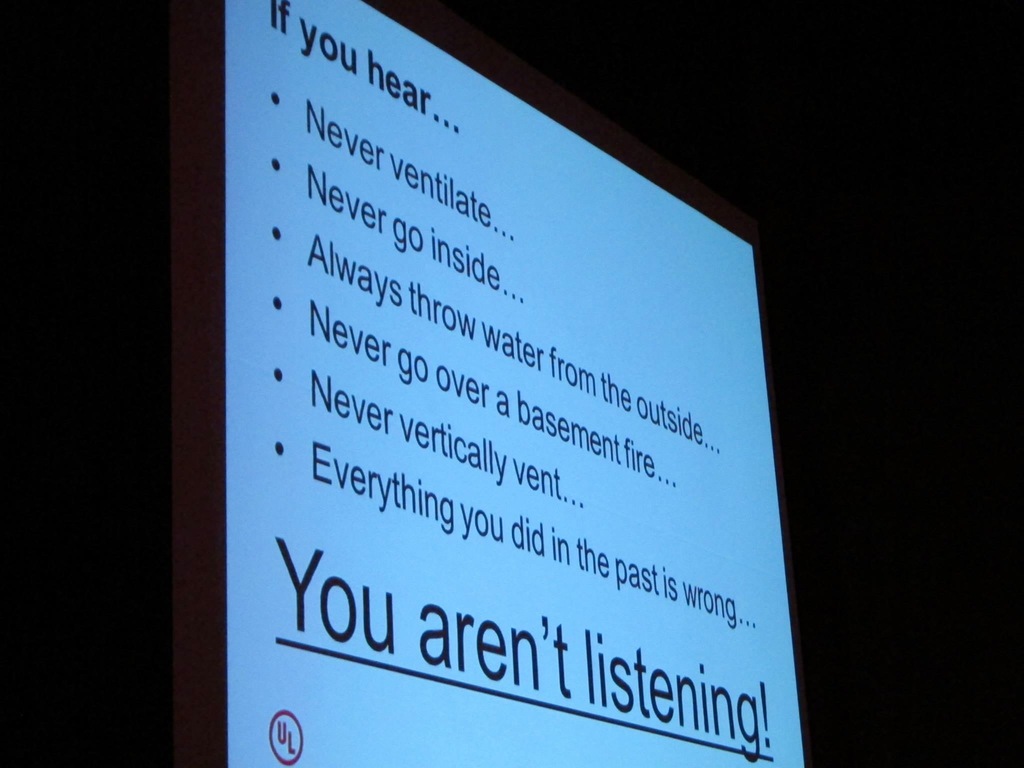 Stop Believing Start Knowing- What does this mean?

After sitting in several days of meetings with some of the greatest minds in the fire service. I started thinking about the current cultural divide in the fire service. I came to a conclusion that it’s not just in the fire service it’s in our entire society. No matter the topic, we are divided. Trivial issues seem to have someone speaking for or against it. Pew Research recently questioned 10,000 Americans and found that our society is more polarized than ever. Our strong beliefs persuade us on who to marry and even where to live. Were not listening to each other. I believe (yes I said it) that it’s partly due to the evolution of smart phones. Were constantly connected and often times miss out on opportunities to have conversations with others that we could learn something from. Were not very good listeners these days, we don’t open our minds and listen to others opinions. I was recently told by a fellow firefighter that the phrase “Stop Believing, Start Knowing” was offensive. So I questioned myself to see if I was partly causing the divide and if I was truly listening to the firefighters that I have disagreed with in the past. We have differing opinions on the definition of our message. These meetings made me realize that I am listening, and when faced with controversy or discontent it is possible to find a solution. It was a tremendous feeling to work amongst a group of individuals that even though there are differing opinions we were able to work towards a common goal of enhancing firefighter safety through research. .

We are all in the fire service for the same thing- To Save Lives and Property. It’s our core principal. Why wouldn’t we do everything possible to educate ourselves to be more efficient, and even more aggressive on the fireground?  I believe (Yes, I said it again) that we can be more aggressive on the fireground if we educate ourselves through firefighter safety research. I admittedly am a much better firefighter because of the research. It has taken many hours of reading the detailed findings and not just the executive summaries. I was able to open my mind and formulate decisions based on what the research was teaching me. It made me realize that what I had believed in the past was wrong and that I could be better, if I embraced the research and used it to become a better firefighter and firegound officer.

Bill Nye the Science guy once said “Everyone that you will ever meet, knows something that you don’t”. We need to start listening and learning from each other. Don’t multi-task during conversations at the firehouse. As my friend B/C Jerry Wells would say “BE HERE NOW” -think about that phrase for a moment. When were at the firehouse we need to be engaged and thinking about that next fire. Mentally prepare yourself and practice your skills/tactics based on facts, not on beliefs.

I’ve learned to enter every conversation assuming that I have something to learn.

Set aside your personal opinion and open your mind.

If you don’t know, say you don’t know. In today’s age of Internet searches it’s pretty easy to figure out answers. When having courageous conversations on tactics do not equate your experience with others. If you have something to say take a moment to listen others first. Don’t repeat yourself, just to get a point across. It’s easier to talk than it is to listen. Humans can Speak 225 words per minute but we can listen to 500 words per minute. It takes effort and energy to listen. I’m not saying that I’m a good listener, but I am working on it.

“Most of us don’t listen to understand, we listen to reply” -Steven Covey

This quote resonates with the current fire service culture and makes me realize that maybe the firefighter safety research message is not being heard. It has definitely been misconstrued.

For Example, the ventilation study has been torn to shreds by those that haven’t taken the time to fully examine the details and listen to what it’s saying. The studies provide factual data for firefighters to enhance their tactics. I’ve heard firefighters argue different tactical considerations of the same study. The pro-roof ventilation crowd will say that the study states vertical ventilation is the most efficient ventilation for smoke removal. And then the anti-roof ventilation crowd argues back that any ventilation opening causes temperature to increase. In this case they are both correct, but they are only quoting one small piece of the puzzle. They are using one small part to prove their own misconstrued point. If they had listened to what UL_FSRI was actually saying they would know that it’s much more complicated than just one tactical consideration.

The Stop Believing, Start Knowing message wants to enhance firefighters educational opportunities to further their knowledge, skills and abilities through research based tactics. Were not trying to create a divide or be offensive to anyone! We are passionate about the fire service and we want the firefighters that could possibly respond to save our own families be armed with the best information. As our fireground’s continue to evolve we need to align our tactics with the research in order to be safer and more efficient. Thanks for reading.