Halloween III; The Season of the Jake 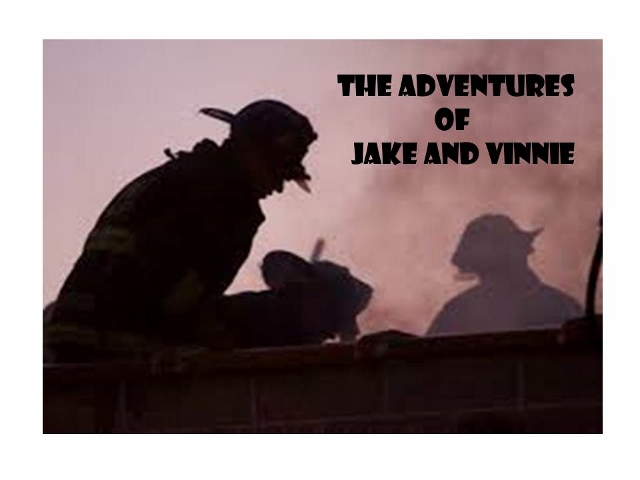 A Jake and Vinnie Halloween Special

In 1906, at the top of the bluff overlooking the scenic river valley, bank president Cyrus Edelstein built a beautiful, three-story, brick mansion for his young bride, Samantha.

The site, on which this house was built, was an Indian burial ground. As the builders came upon yet another grave, they would plunder the artifacts and toss the skeletal remains into the river valley below. The mansion took two years to complete. Three men died building it and another disappeared without a trace.

Then there were the problems with the house itself. Doors would open on their own and without warning. Locked/unlocked-it didn’t matter. Glass in the windows would crack. Images would appear in mirrors. The walls would BLEED! Sounds of moaning would come from the deep recesses of the basement. Screams would come from the attic. The sounds of footsteps could be heard coming from the third floor ballroom. At night, candles would go out, even though there was no wind. Winds would come up with furious force and quickly die down to an eerie stillness.

Samantha had resorted to taking an opium-based elixir to calm her fears and to get a few hours of sleep. Cyrus had a constant companion fixed in a shoulder holster under his ever-present suit jacket. He drank heavily and was prone to sudden fits that would have him emptying his .45 caliber Colt into anything that moved or even looked like it moved.

It was on Halloween night in 1909. It was a rainy night with temperatures in the 50s. Cyrus had thrown the last log on the fire and was preparing to go outside to get more wood. Samantha was lying on the studio couch feeling the effects of her opium cocktail and was reading poems by Elizabeth Barrett Browning. Cyrus buttoned his overcoat, tilted his fedora and grabbed the lantern.

He got to the wood box and it was empty. He yelled an obscenity and headed for the woodpile to chop some more wood. As he put the lantern down, he thought he heard a scream, but didn’t think anything about it. He’d been hearing them for three years! He couldn’t find the axe that was usually stuck in the stump, so he headed to the out shed where he kept his tools.

As he opened the door to the shed, it suddenly slammed shut again. At the same time, he dropped the lantern, causing it to go out. As he bent down to retrieve the lantern, he heard an evil laugh that sounded like it was coming from inside the shed. He fumbled through his pockets and found a match to re-light the lantern. As he struck the match, a puff of wind came out of nowhere, blowing the match out. He heard the evil laugh again, only this time, it sounded like it was behind him. He quietly and precisely reached for his Colt and pulled it from his holster. He spun around, firing his gun as he did. He caught a glimpse of a large figure. He couldn’t tell if it was man or beast or both, but he knew he had put no less than six bullets into it and it was still there.

Before Cyrus could move, a huge claw came out and ripped his neck from his right ear, under his chin and to his left ear. He felt his front getting warm from the blood, but his body was cold and shaking. Just then, an axe came slamming down and into his skull. But before Cyrus could die, he saw the war paint on the face of this “thing” and felt that claw penetrate his chest and saw his own heart plucked from him.

His hacked up body pieces would be found scattered through out the property, most likely from scavenging coyotes or wolves.

And inside the mansion-the house built for his precious Samantha-Hell’s fury was being unleashed. Samantha was found dangling from a rope that was attached to the staircase banister. Three more inches and she would have made it to the floor of the grand entrance way. Her head had been turned 180 degrees, facing backwards to her front. Her left eye was hanging out of its socket. Her right eye locked as if it had seen the Devil himself. Her soft, white skin was completely shredded from between her shoulder blades. The back of her head had a gaping h*** in it and much of her skull and brains were gone. Her scalp had been removed. Beautiful Samantha was nothing more than a dangling, bloody, gory, gooey mess of flesh wrapped in a satin nightgown.

The local constable closed his investigation as a murder followed by an accidental death. He hypothesized that Cyrus killed Samantha in a fit of rage. It had long been rumored in Grandview that Samantha had a young suitor-the son of the fire chief-and that Cyrus had found out. Constable Henry figured that Cyrus was attacked and killed by a pack of hungry wolves or wild dogs. The case was closed. The mansion remained empty for several decades. It is said that on every Halloween, light could be seen coming from the house and the unholiest of noises could be heard coming from the bluffs.

Legend has it that the sounds came from the ghost of Jimmy Hanlon, the son of the fire chief and lover to young Samantha Edelstein.

Tonight-Halloween-Jake, Vinnie, Joey and Sara would join the rest of the ghosts and goblins and tour the Jaycees’ haunted house.

Jake knew that he would need help controlling the kids tonight. He was going to take Joey and Sara to the haunted house and then for pizza. So he asked Vinnie if he would help out. Vinnie had heard the stories of the old Edelstein mansion and jumped at the chance.

They arrived at the haunted house at 6:30 pm. Jake paid the admission fee for everyone and as soon as they entered the front door, it went to pitch black and total silence. Jake and Vinnie had both smuggled in their mini-Mag lights and turned them on almost simultaneously. Joey and Sara were giggling and pushing each other. Jake asked them, “Anyone scared yet?”

Sara chimes in, “What can happen? It’s all make believe”.

A door that had not been seen when they entered the house suddenly opened. Screams, moans, chains rattling and loud footsteps could be heard coming from the other side of the doorway. Ghosts could be seen flying about the room. Dark silhouettes of grotesque creatures could be seen on the walls. And there appeared to be a Native-American; possibly a chief, whose transparent figure could be seen “floating” about the room. He didn’t walk because his feet were not touching the ground. He was elevated about a foot off of the floor. Jake turns around and it’s gone. Good visual effects for Jaycees Jake thought.

Just then, everyone got hit with a big gust of air.

Vinnie, Joey and Sara are still laughing and having a good time. Jake is checking his pulse.

They enter another room and it is loaded with all kinds of glow-in-the-dark monsters. Black lights, strobes, red flashing lights, sirens, screams, wailing; all the classics.

Something put its hand on Jake’s shoulder. He drops to his knees. When he stands up, there’s nothing there.

What put its hand on my shoulder?” Jake asks himself.

Sara was about five feet off of the floor, as if something invisible was holding her.

Vinnie says, “These Jaycees definitely have it together!”

Joey and Sara were having the times of their lives. Ahead of them, there were two doors. It looked like they were suppose to go through the one on the left, but suddenly, the door on the right opens, so they all headed for that door.

Once through the door, it immediately slammed shut behind them. Everyone screamed, including Jake and Vinnie. Vinnie tried the door, but it would not open. Must be a one-way latch. Jake and Vinnie have their flashlights on and see what looks like blood oozing out of the walls. Vinnie’s light goes out and he can’t get it back on. Jake says, “Well, we still have mine and it has fresh batteries.” Without warning, Jake’s flashlight goes out.

“Ah, now; that’s not even cool. Jaycees couldn’t do that. No friggin’ way,” says Jake.

“Jake; where the hell are you?” asks Vinnie.

“Right he…Jesus, Vinnie; get your nose out of my butt”, says Jake.

“Joey? Sara? Get over here with me and Vinnie”, says Jake.

Above the fireplace is a portrait. It was in rough shape and was missing part of its frame, but the eyes looked “alive”! They were following their every movement.

“Jaycees definitely got it together”, says Jake.

Suddenly, an axe went whizzing right between Vinnie and Jake and sticking into the wall with a terrible thud, followed by the most God-awful, blood curdling scream Jake had ever heard.

“What the…” was all Vinnie could get out.

Joey and Sara are starting to get concerned for their dad.

“Yeah, Joey; I love peeing all over myself”, says Jake.

Jake thought he saw the Indian again. Mind is just playing tricks on me he thinks.

That’s when he hears it. Do you want to die? Are you prepared to die? You are on sacred ground. Leave now or you will die says this voice from nowhere.

Friggin’ Jaycees, Jake says to himself. Wait till next spring. We’ll kick their butts big time when we play ‘em in softball.

Jake thinks that he heard a growl. Hmmm. Then he hears it again. And he smells something horrible, like formaldehyde! What a stench! Out of the corner of his eye, Jake sees the flash of what looked like fangs. And the growling. It’s getting louder and the smell is getting stronger.

“Roger that, Jake, but where we going?” asks Vinnie.

“That sign over there says ‘exit’. Here’s hoping that it is”, says Jake.

Jake kicks the door with the heel of his boot.

Eureka! They are all standing outside. Jake is bent over with his hands on his hips feeling exhausted. Everything seems as if it is back to normal. Joey and Sara were chasing each other. Vinnie was checking the messages on his cell phone.

Just then, a chainsaw fires up right behind Jake and he damned near passes out!

For those of you who are curious about Samantha’s lover, Jimmy Hanlon?

Well, he got away with murder. TWO murders to be exact!