While watching a recent replay of a FDIC webcast Lt. Ray McCormack of the FDNY was emphasizing the need to “dig deep” into NISOH reports and I paraphrase here, utilize them in your department’s structure and response. I immediately recalled a fire my department experienced recently that should be considered as a close call and how if my department as a whole would have heeded McCormack’s advice how we may not of gotten as close as we did to a potentially serious situation.

My department is a career department located in Northern Ohio, we cover 21 square miles and 56,000 citizens out of three firehouses we staff three engines, a truck, and a shift commander in a S.U.V. Below is a brief synopsis of our event.

On June 27th 2015 at 0715 hours forty-five minutes prior to shift change the Elyria, Ohio Fire Department was alerted to a reported fire at 980 Abbe Road North, the occupancy is the College Heights Baptist Church, heavy rain was falling and a storm had gone through the area during the early morning hours. See diagram and overhead of building below. 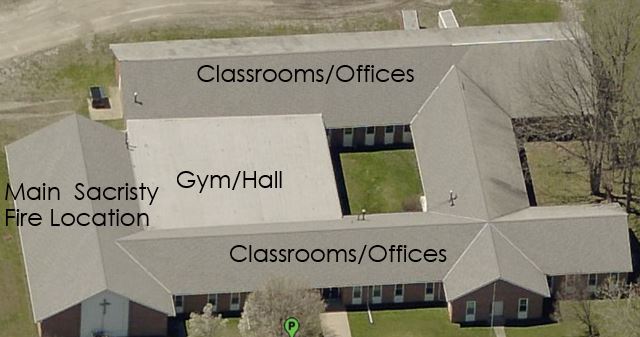 Engine 4 staffed by a crew of three members arrived on the scene at 0718 hours, Acting Lt. Charles Smalley radioed he had “smoke and fire” showing and was going to conduct a 360. Audio Attached E-4 on scene.mp3

Engine 4 after the 360 laid 200’ of 1 ¾” line and went into an entrance door that led right into the sacristy, the area was clear with good visibility and no heat. The Assistant Chief (Shift Commander) arrived and assumed command, he had a second engine arriving to lay a supply to Engine 4 and then ordered an addition attack line laid to prevent any extension from the sacristy area. This line was brought in to the A side front door in the center (see overhead below). 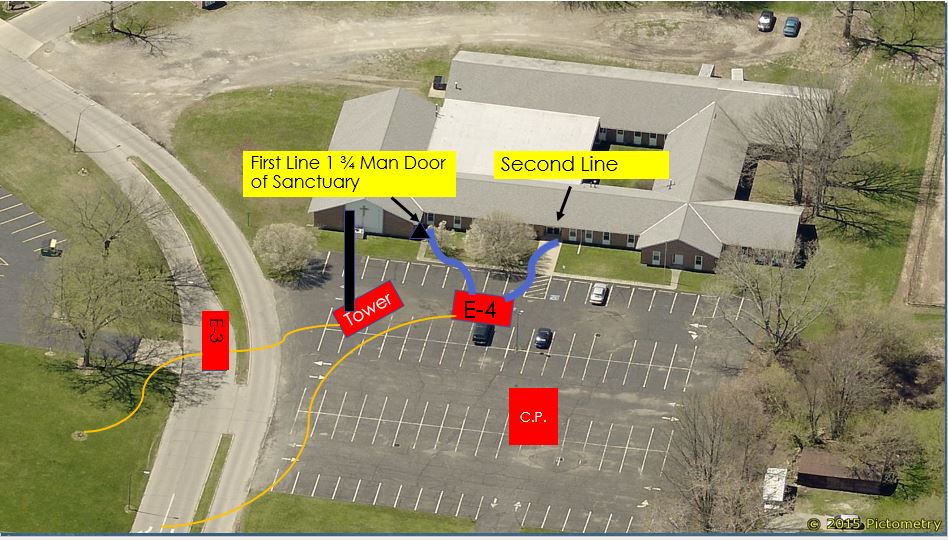 Command also had the truck company set up on the A-B corner, during this time Engine 4 was still tryingto find the seat of the fire,E-4%20report%20to%20C-3%20A.mp3 Our communications center give command a “time update” every 20 minutes from the time of the alarm, this check was established for the sole intent of command to re-evaluate conditions and provide a progress report to dispatch that is time stamped (Audio Attached). It was during this time that Engine 4 radioed that the ceiling was “coming down” on them and they were retreating to the foyer area, the crew was very fortunate they were able to make it back there the nozzle and fifty feet of line was damaged and buried in the ensuing collapse. Command advised all companies operating to retreat to a safer area, the fire was eventually knocked down with master streams from the tower company and fire was prevented from penetrating into any other areas.20%20min%20update-collapse.mp3 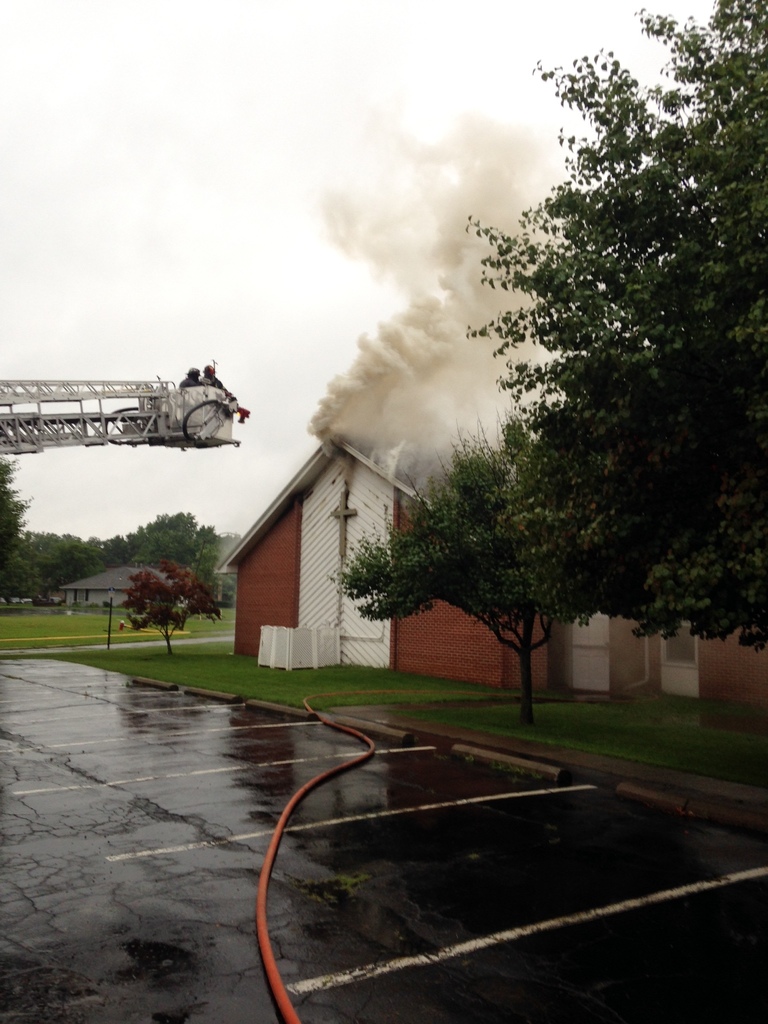 In speaking with the first in acting officer who is by the way an excellent firefighter well respected and knowledgeable several thoughts came to light that I would like to share here in this blog, first and foremost the use of the thermal imager is not a “tell all” to conditions above. It was evident from the exterior that fire was involving the attic space of the church the smoke was moving fast or was of any noticeable color to indicate a large amount of fire, the acting officer immediately used his T.I.C. on the interior to scan the ceiling we must recall how an imager works most TICs operate using relative temperature difference, that is the comparison of the things around the TIC. The area under the blazing truss loft never raised above 122 degrees, the 5/8” drywall kept everything insulated. The T.I.C. was giving a false sense of the true environment. The way my department operates the engine crews very rarely bring in any kind of hooks or pike poles, the two members of the three member company (officer and firefighter) brought in a hand tool and hoseline.

The ability to make an inspection h*** is critical when operating in a Type II or V building utilizing modern construction methods i.e. trusses. Making an inspection h*** near an exit (front door) or as high as you can where the ceiling meets the wall as in the case of a newer church or large area can be a wise choice and allow quick reconnaissance of the truss loft. Photo of truss loft and 5/8 sheet-rock below after fire. Photo: Mike Mullally

I am proud to be a member of the department I am on, we serve a very diverse community and protect mostly a legacy constructed residential and commercial structures, I wouldn’t consider us a suburban department we are best described as a typical “rust belt” Midwest department, like most others we face mostly residential structure fires. Some of the best firefighters in Northern Ohio in my opinion serve arm and arm with me! We must remember however that we cannot take a “cookie cutter approach” to all fires, commercial fires such as this one was a rarer event in the months leading up to this event. While not an excuse I wanted to make my point to anyone reading this that the time to prepare is prior to the event and create the environment with correct tactics, training and procedures that separate the residential from commercial.

My department like most others has been decimated by cuts we have gone from four stations to three and five engine companies to three our minimal daily strength while not in writing is thirteen, a fire with the potential this fire had needed much more than thirteen personnel on duty. Mutual aid was not called by the I.C. had the collapse trapped our members we would've been in deep trouble. You need more people for a commercial structure fire period! Review your staffing and auto-aid, mutual aid agreements etc. Are they set up for a "one size fits all" fire or the hazard and size, residential vs. commercial?

The Use of NIOSH Reports in EVERYDAY Training

After this fire, I printed out a NIOSH report I previously studied and also had the fireground audio of that reviewed the LODD of a firefighter in Muncie, Indiana the firefighter was killed in a structural collapse of the main sacristy area. After disseminating the report I was amazed by how many members said and I paraphrase here, WOW! Look at the similarities between our church fire and the one in Muncie. While obviously relieved that we did not have any injuries at our event I was thoroughly disgusted with myself for not doing a better job as a leader and command officer in not getting these NIOSH reports out and conducting training on them PRIOR to the event not after when it could’ve been too late.

We need to do a better job incorporating NIOSH and department generated LODD reports into our training, instead of focusing on the building directly involved in the LODD take a look at buildings in YOUR response area that are of the same generation or “era” as the one involved, this gets your members thinking locally and can really provide a spark in your training and sharing of critical building information.

This type of training is cheap and best served on those days you can’t get out into the district, too hot too cold, etc. I had an officer tell me he just doesn’t have the time, well if you have time to read the paper and have a cup of coffee and BS in the morning with your crew you have an hour that you can review and discuss a LODD, make a quick power point on the event and then use pics of your buildings either from your files or from a GIS site, “what if” the call of fire in your building rather than attack the actual members and their actions involved in the report.

I worry that we focus too much on the damn battle of where we need to put the hoseline, we are going to have an entire generation of firefighters who will say they “grew up” during the so called fire “civil war” where we constantly battled where the water goes. How about we get back to studying and analyzing the real enemy not Kerber and UL but the building, the era of its construction and its size and occupancy.

We were lucky on June 27th of this year, the use of NIOSH and LODD reports in our training prior to the event can help us all much more than carrying a horseshoe when the bell rings. Look into add NIOSH reports to your training program.The circumstances reported by NIOSH that contributed to the LODD may not be dead on to the same issues found in Elyria, but my point is every NIOSH report tells a story and opens up a huge training portal for departments. 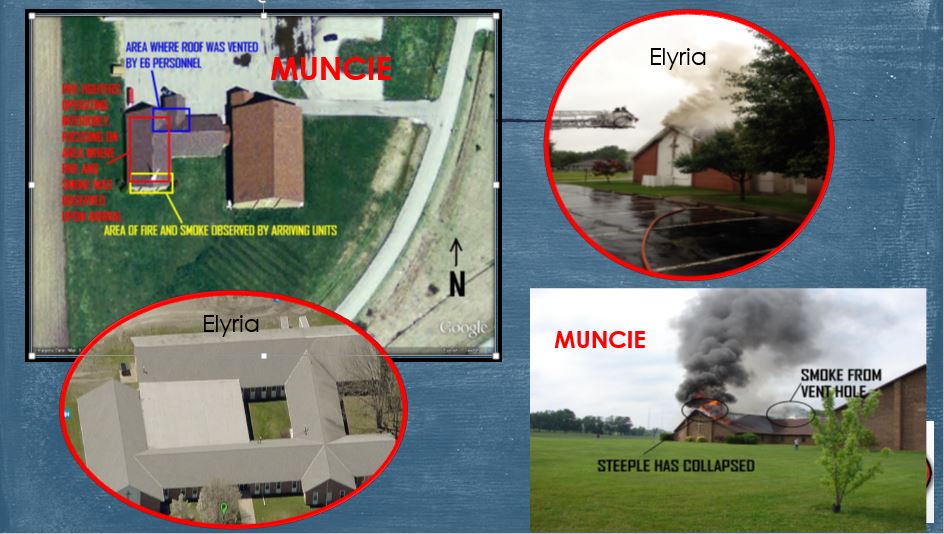