This week will mark the 14th anniversary of September 11th 2001, an anniversary that some say has been forgotten by society at large. While certainly there are exceptions, perhaps it is largely because many do not have a personal ‘tie-in’ to the events that shook places like Shanksville, Arlington, and New York City.

Yet, it remains unforgettable by some, especially to those in our line of work… it is a date that lives inside of us, daily, weekly, and monthly.

Many continue to struggle to find a balance, as emotions surrounding the enormity of the event can become quickly overwhelming.  Many still suffer debilitating health effects from the actions taken in the hours, days, weeks, months and years that followed.

But I must digress, aren’t anniversaries meant to celebrate? Hallmark suggests the modern gift of ‘gold’ on a fourteenth wedding anniversary. While the egregious and murderous attacks on American soil and the deaths of American lives certainly do not conjure up any of the joys found in modern marriage; I, like many of us, find myself married to the anniversary.

But there is some solace in celebrating.  We celebrate lives lived, not lost.  Brave men who that day in September lived the verses from John 15:13 "Greater love has no one than this, that one lay down his life for his friends.”  Let us celebrate them indeed.

Celebrating with gifts of gold, the underlying foundation for national currency, a tangible precious commodity found in necklaces and rings, no that’s not these men or this day.  But, the perhaps the more subtle and subdued measure and message found in:  “The Gold Standard.”

The gold standard as defined in the several dictionaries (part 2) state: the best, most reliable, or most prestigious thing of its type.  Another defines the gold standards as:  a model of excellence; a paragon.

These men set the gold standard for service and sacrifice.  For on a beautiful cloudless sky 14 years ago they were pressed into an arduous fight.  They faced an evil not fully known or understood, and did so steadfastly, in order to attempt to save those who could not save themselves, to provide comfort in chaos, to be a beacon of hope.

It was an operation of spectacular proportions, thousands of civilian lives saved and persons evacuated to safety from the areas in and around the world trade center.  These men held their ground, pushed forward, dug in and upheld that ‘gold standard’ of life safety.

While no one could foresee the tragic ending of this operation, for 343 New York City Firefighters and Fire Officers, this was to be their last ‘job’.

“Memories of our lives, of our works and our deeds will continue in others.” ~ Rosa Parks

This past summer, after extensive renovations, the members of my company returned to operate within and respond from our ‘new’ fully renovated firehouse. The new home has indeed presented many unique opportunities to the members. Even with our rich history, very few members of the FDNY can honestly say that they have had the privilege to work in, what really is a brand new firehouse.

While with each run we continue to carry forth the FDNY’s historic traditions of service and bravery, the firehouse walls are a ‘blank canvas,’ a space to create new lasting memories for all those who enter.  With the creation and evocation of memories past and future, the officers and members are building a World Trade Center memorial in quarters.

The tribute will not only serve as a steadfast reminder of our fire departments staggering losses, but to all the nearly 3,000 persons in our country who perished that fateful day.   The memorial will not be exclusive to department personnel, as it will be prominently displayed near the apparatus floor for all those who enter quarters to view. We believe it will become an asset to the community at large and foster educational awareness and our commitment to “NEVER FORGET” September 11th.

Our goal is to have all whom visit quarters take a moment to pause, remember and reflect in what was September 11th 2001. 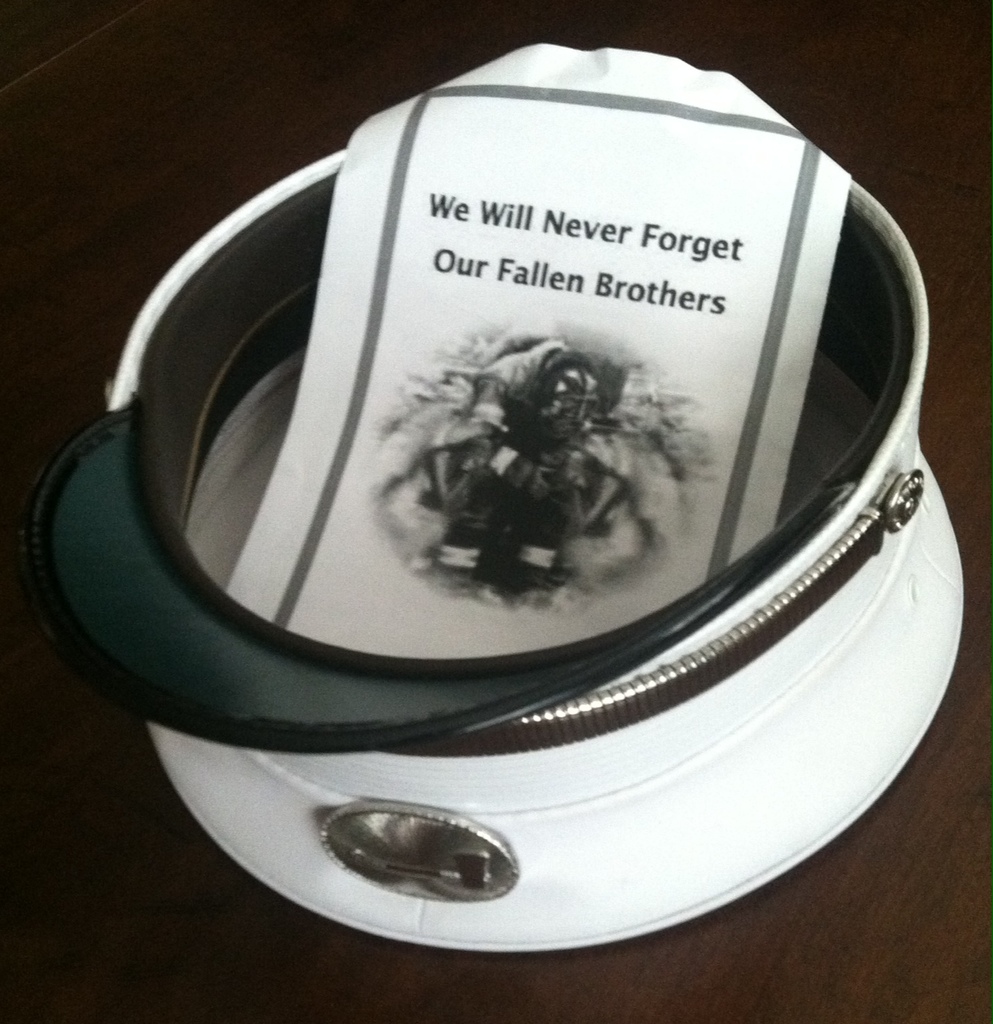 As we enter into a New Year I thought it was important...to me and to Lt Mitchell to acknowledge this date...not just every 9-11 but EVERY DAY. Our world, country and the service was forever changed by what happened 9-11-2001. For me every time I cough I'm reminded of my days  spent on the pile working the day shift for USAR PATF-1. Every physical I go for is racked with anguish over what 'might' turn up. I will NEVER forget the pain and agony I witnessed on the faces of the FDNY we worked to recover their lost brothers. I will NEVER forget what my eyes had observed. If your'e struggling for a New Years resolution I have a suggestion...every morning you awaken take a second and think about what the members of the FDNY were thinking when they looked up at those burning towers just before they climbed to their death.