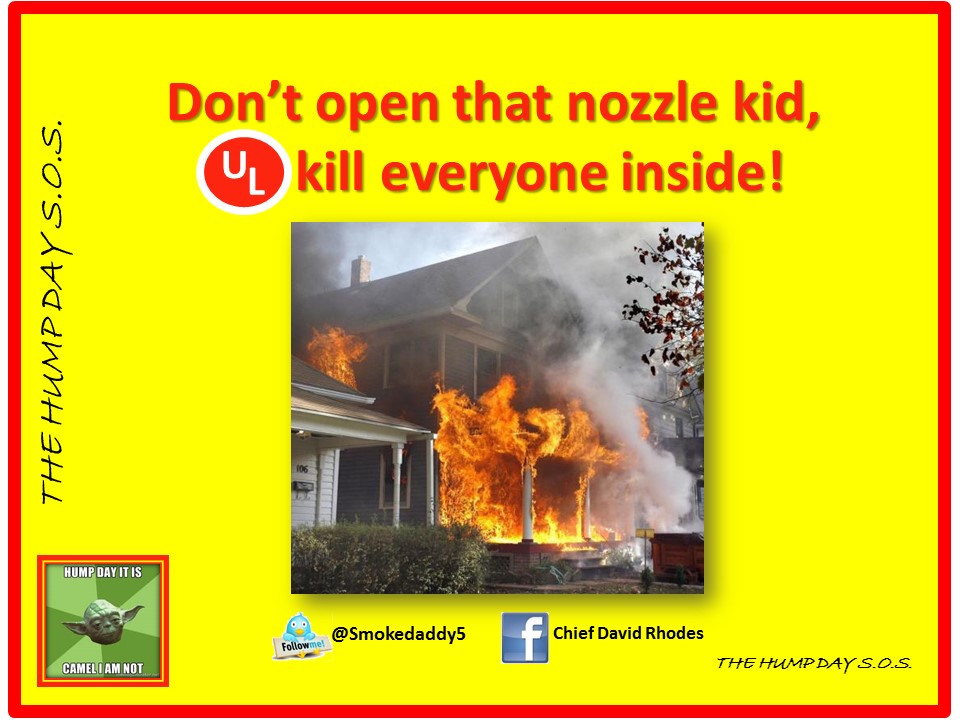 Don’t Open That Nozzle Kid U’L Kill Everyone Inside

From the time I was cutting my teeth in recruit training, circa 1985, I was told NEVER to flow water from the outside of a structure because, “You will steam everyone to death!” I had no reason not to believe what I was told. The lessons included that I must always attack the fire from the unburned side of the structure. Even if this meant a longer stretch, a fence scaling, an old refrigerator in front of the back door and a Pit Bull. I obeyed like most impressionable youngsters who are seeking acceptance with those elders. Over the years I convinced myself through practical application and experience that these things were true (I think so anyway). Then one day due to some logistical issues, my A.D.D. and the inability to wait on help getting the line around back, I accidently on purpose opened the line on a fire that was blowing out the front windows, front door and porch. I knew it wasn’t the right thing to do but I couldn’t just stand there and do nothing. I knew I was going to push the fire back into the house and probably get in trouble but I thought if I could push the fire back in the house then I would go in the front window to the side of it and do an end around then push it back out the front. For some unknown reason my plan did not work. Flowing around 150 gallons a minute into the ceiling of the porch then the window and then the front door I accidently put the fire out! Oh my God, I thought. Hopefully no one was in there because if so I will probably be charged with murder. Well there was no one inside so now I was only left with fact that I had unnecessarily burned rooms in the back of the house with my fire pushing. But another unbelievable thing happened. There was no fire damage other than the two front rooms that were involved on our arrival. Surely an anomaly had just occurred. Maybe no one saw what happened.  Now it worked that time, but would it work in some other circumstance? I wasn’t going to chance it!

In the last few years’ new research and information has been made available that questions the logic in teaching “never and always” when it comes to firefighting tactics. When I hear someone say, “You can’t push fire,” I hear 20 veterans call BS and start telling stories about pushing fire all over the place for years! I too have pushed fire (I think). I also know for a fact that I experienced some steam burns due to the water flow of exterior firefighters directing their streams through an window while I was searching (I think). I say I think because what if, just what if I know it was fact because my mind was already programed to relate one cause to another? Not to dispute that it happened but was it the hoses fault or the fact they knocked the window out? Was it a whipping of the nozzle that took a straight stream and essentially moved air like a fog stream? Was it something else altogether or a combination of things? The fact is, I don't know what I thought I knew or at least I am questioning it now and not just accepting it. Maybe we have it right or maybe there is more to learn.

As firefighters, community leaders, mentors and trainers we have a moral responsibility to know the answers to tough questions about firefighting tactics. We must know what happens when we __________ (fill in the blank). If we know what happens when we flow water from here or there, inside or outside and what effects we are having on the interior environment and why, it helps us better understand when to and when not to do all aspects of fireground tasks. This is emotionally risky because those of us “aggressive interior” living, breathing, preaching die hard “real” firemen are at risk of being wrong.  If we are we may even have to shave our mustaches and that would be very bad!!! However, there is equal chance that we are right and there is yet another equal chance that the truth is somewhere in the middle depending on other factors. (This is Yogi Berra math if you’re keeping tract, 90% is half mental). Whatever the answer is we can’t be afraid to find out because the truth will only make us more effective and more proficient at saving lives and calculating risks.

Last week in Indianapolis, at the greatest show on earth for those who think like us, the UL and NIST team held a Hands on Training Class/Workshop with 200 firefighters a day in attendance. A dedicated local group of firefighters were the only one’s allowed to do any fire attacks under the direction of the UL/NIST team. I spoke with one of the local firefighters afterwards to see what he had to say. He summed it up like this, “I’ve read some of that stuff but I always just sort of figured everything was staged to get the results they wanted. To be honest I didn’t really put a whole lot of stock in any of it. But I have to say I was surprised at the results, especially at how the interior temperatures dropped by closing doors and just flowing 20-30 gallons of water into the room. It’s not what I wanted to see but I can’t argue with the facts.” He too had accidently opened the nozzle before he was supposed to and experienced premature extinguishment from an unlikely position.

Despite some of this anecdotal evidence causing heartburn among the faithful brethren, we still don’t have all the facts and all the questions answered when it comes to, “What about the victims inside?” "Steam heat is worse that dry heat" (isn’t it?). So with that we embark on the next phase of question answering. We don’t know the answers despite our best guess and our experiences so don’t you want to know?

Next month the Underwriters Laboratories Fire Safety Research Institute will begin the “Study of the Impact of Fire Attack Utilizing Interior and Exterior Streams on Firefighter Safety and Occupant Survival”. From ULFSRI:

UL FSRI is pleased to announce that it has been awarded a fire prevention and safety research grant to conduct a project titled, “Study of the Impact of Fire Attack Utilizing Interior and Exterior Streams on Firefighter Safety and Occupant Survival.” This 3-year study will build on the research conducted to date on fire service ventilation and suppression tactics (e.g., interior suppression versus “transitional attack”) to provide a comprehensive assessment of firefighting tactics on chemical and thermal exposures for victims trapped within a structure, and the firefighters advancing toward the fire or operating in other parts of the structure. While research at UL and NIST has shown transitional attack to be a viable option for rapid knockdown of a large volume of fire, there remains some hesitation to adopting the tactic for fear of endangering trapped victims and pushing heat and steam. Fire service adages such as “don’t put water on smoke” and “you will steam the victims” will be examined in detail in the context of today’s modern fire environment to provide credible scientific information that can improve decision making on the fire ground. Using full-scale residential structures in UL’s Large Fire Laboratory, several different fire scenarios will be tested using tactics that include interior only and combined interior/exterior fire attack. The research will develop important fire data that includes temperatures, heat flux, flow velocities, differential pressure, gas concentrations, and moisture content throughout the structure. The results from the tests will also provide knowledge on how flow paths and conditions in the structure are impacted with nozzle pattern selection and nozzle movement during fire suppression operations.

As a member of the ULFSRI Advisory Board I am very pleased with the panel we have selected to guide this research and design experiments to answer some of these tough questions. Over 300 applications were received from firefighters who have an interest in finding out these answers. So who are these masked strangers and do they know anything about fire attack?

Members were selected based on fire service experience, geography, department size, department type and experience with fire attack. This criteria allows for various levels of experience within various size departments that utilize various tactics from around the world.

For more information on the project visit www.ulfirefightersafety.com