In part 1, I discussed the ability of a single four person engine company to aggressively attack an external apartment building fire, by deploying a deck gun blitz attack on the outside seat of the fire that was extending up the exterior of the building and threatening, or already in the attic space, while at the same time, getting a 2 ½ inch line up to the top floor and flowing water into the attic. Part 1 can be found here: The Engine Company and the Power of One, Pt. 1 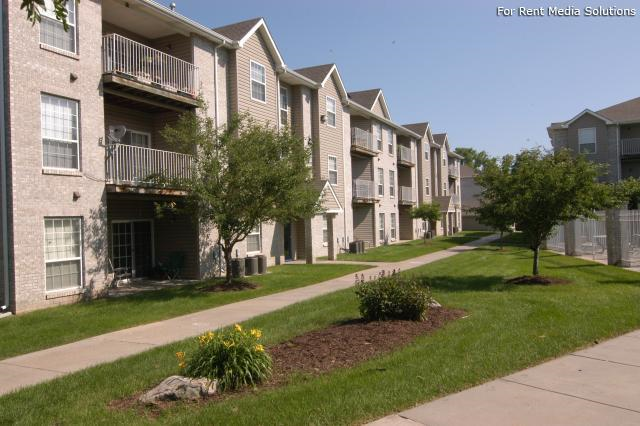 However, what about those instances when the external balcony fire is on a side of the building where there is no access for apparatus, so attacking the fire with the deck gun is not possible?  Take a look around your district and see how many apartment buildings have areas with no access for apparatus, or have center courtyards with balconies. The objective remains the same, to quickly attack the seat of the fire on the outside of the building with as many gallons per minute as possible while getting a line to the top floor, pulling ceiling and getting water into the attic space as 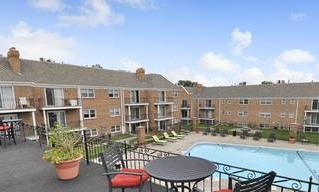 Along with the deck gun blitz attack tests discussed in Part 1, we also conducted tests simulating this situation. To get water onto the external fire in an area where we couldn’t use the deck gun, we deployed a 2 ½ inch line around the side of the building to the inaccessible area. Now, I know what you’re thinking, “pulling up and hitting it with the deck gun is one thing, but stretching a 2 ½ inch is a whole different animal, how many people and how long will that take!” Well, I’m going to tell you, and again, you might be surprised.

This set of experiments tested the ability and effectiveness of a single, first arriving four person engine company to initiate an external offensive fire attack by deploying a 2 ½  inch attack hand line with a 1 ¼ inch tip around the side of the building in order to flow 320 gallons per minute for twenty full seconds on a simulated fire area involving the second and third floor balconies of an apartment building, and impinging upon the roof line while the following other tasks were also being completed:

To facilitate an easy deployment by one firefighter, the 2 ½ inch line is preconnected with 200 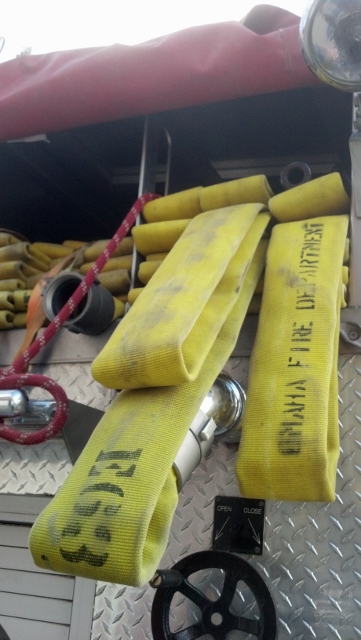 ft. available. Pull out handles are set up at 100 ft., so when the firefighter pulls the load, he/she will have 100 ft. on their shoulder and 100 ft. remaining to walk away from the apparatus. This 200 ft. preconnect is lying on top of an additional 400 ft. of 2 ½ inch that can be used to quickly extend the preconnect if needed in any situation. The 1 ¼ inch smoothbore nozzle allows for 320 gpm, with a lower 50 psi nozzle pressure and 36 psi friction loss, which equals a lower pump discharge pressure (86 psi), and therefore less nozzle reaction. I also believe that the smoothbore will provide better reach in a stiff wind when trying to hit the exterior fire. Here is a video of the external attack in a strong wind, notice the large flag in the background: 2 1/2 inch exterior attack  Now, some may advocate the deployment of a portable ground monitor in this situation, however how long, and how many people will it take to realistically deploy, set up and supply a portable monitor? An appropriate balance of power, speed, efficiency and effectiveness are the keys to success here. 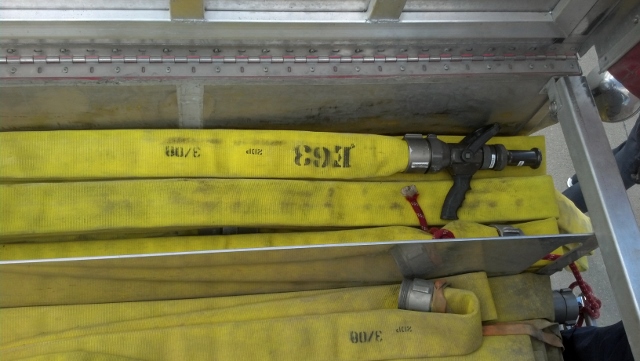 While the 2 ½ inch is being deployed and attacking the external fire, the officer is completing a size up and possibly an interior recon to assess conditions. The second firefighter is deploying a dry 1 ¾ inch line into the building and up to the third floor. (NOTE: In all of the external apt. fire incidents experienced by my department the interior conditions were very tenable, with conditions on the top floor consisting of light to moderate smoke, but with the fire still on the exterior of the building. So, a dry apartment stretch to the fire floor was possible). The officer, with a tool to pull the top floor ceiling, assists with getting the interior line to the top floor and flaked out, before calling for water. The fourth crew member, the driver, operates the pump and supplies water to both of the attack lines. 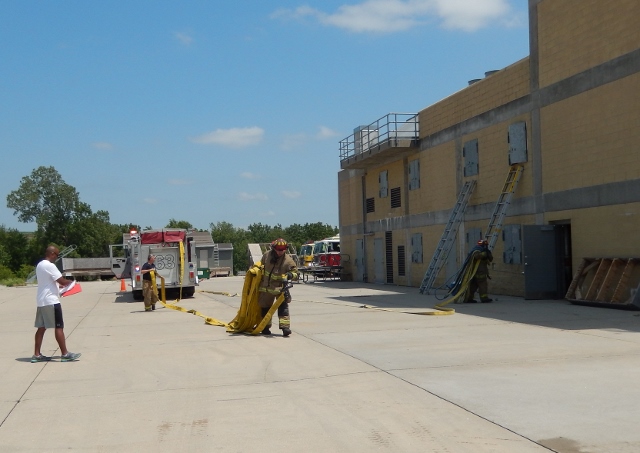 Now, let me explain that a 1 ¾ inch was advanced into the building in this set of tests rather than a 2 ½ inch, because the only preconnected 2 ½ inch line on our apparatus was already deployed to attack the external fire. If your apparatus has a second 2 ½ inch preconnect that can be quickly deployed, I HIGHLY RECOMMEND that it be the line that goes interior. If, as in our case, it is a 1 ¾ inch that goes interior, back it up as quickly as possible by advancing an additional dry 2 ½ to the top floor when additional resources arrive. While we are talking about line selection, some may tend to want to use a preconnected 1 ¾ inch line on the exterior fire. Will a 1 ¾ inch knock down the exterior fire…maybe, but remember, you have one chance to try to get this thing knocked out 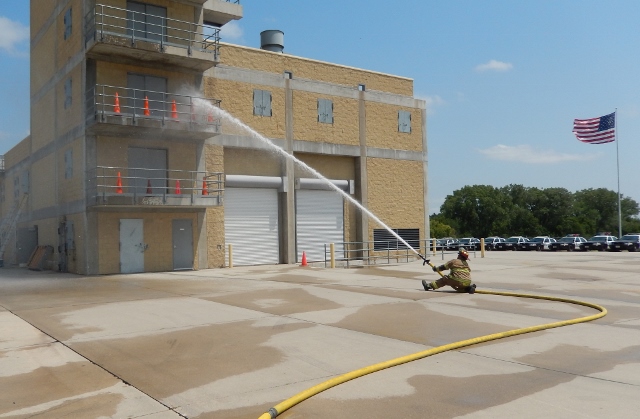 before it takes control of the attic, so go after the big fire with big water. You’ll kill the fire faster and probably use less tank water.

You’ll also notice that a water supply has not yet been addressed, due to the fact that all four personnel are initially occupied. Options for getting a hydrant supply established include, 1.) Once the exterior fire is knocked down with the 2 ½ inch, the line can be left in place and that firefighter can either help secure a hydrant if one is nearby enough to hand stretch, or help advance the interior line upstairs, 2.) The driver can work to secure a nearby hydrant after supplying the two attack lines, or 3.) A 2nd arriving engine can catch a hydrant and lay into the 1st engine.

The time started for each drill when the engine pulled up and stopped on one side of the building. Time was noted for each milestone achieved during the drill and the time stopped when all tasks were completed and water was successfully flowed into the attic above the 3rd floor. The average times to complete all tasks were as follows:

This total time, 2min 31 sec. to accomplish all these tasks, is again pretty impressive of what a single four person engine company can accomplish, considering crews did not practice these drills beforehand. How good could we get if we trained on this tactic?

This tactic could also be applied to externally ignited house fires, such as the ones that start in the rear on the back deck via a turkey fryer or grill, and upon arrival are extending up the exterior and impinging upon the attic. Deploy a 2 ½ inch line to the rear to quickly overwhelm and knock down the external seat of the fire, then advance a coordinated line to the front door to access the interior to check for and extinguish any fire on the interior and attic.

As with everything we do in the fire service, success is achieved not when you arrive, but in the hours, days, weeks, months and years before the fire call comes in. Whether utilizing a quick attack with the deck gun or a 2 ½ inch line, training, practice and preparation are the ONLY ways to create an aggressive and powerful engine company that can, as Denver Fire Dept. Asst. Chief Dave McGrail says, “Overwhelm the enemy with disproportionate force!”.

It is also important to mention that there is no one cookie cutter tactic, solution, policy or SOP for every situation. We have to prepare our personnel to improvise, adapt and overcome by empowering them to THINK and ACT!  Effective fire service leaders will ensure that their personnel have:

Simple and to the point.  Excellent tactics, well thought out!