In any department, volunteer or career, large fires in large buildings eventually bring lots of resources. However, in every one of those fires a single crew, usually an engine company arrived first. Often times the ability of this first arriving crew to make an attack with forward progress on the fire is downplayed, because it is alone against a much larger enemy. What can it realistically do? For example, fires that start on the exterior of buildings, such as apartment building balconies are a more common occurrence than many of us realize. I didn’t realize it until I researched those incidents in my own department where I learned that we had experienced eight in a three year period.  Of these eight fires, seven quickly extended up the exterior of the building, impinged upon the roof line and transitioned into attic fires, resulting in a multiple alarm fire that heavily damaged the roof and top floor.  These fires move quickly, and on the arrival of the 1st engine fire is either threatening to enter the attic or already in the attic. To stop the forward progress of the fire early in the incident the 1st engine must act quickly and decisively, because by the time an overwhelming amount of additional resources arrive the fire has control of the attic and the incident goes into the defensive mode. 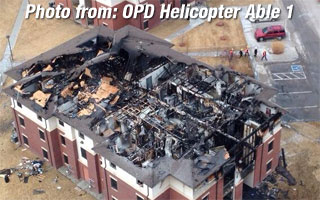 Through his articles and classes, Brian Brush of Fire by Trade (www.firebytrade.com) has recently introduced the fire service to the concept of “relative superiority”. He writes, “Admiral William McRaven, Commander of the United States Special Operations Command defines relative superiority as, “a condition that exists when a smaller attacking force gains a decisive advantage and control over a larger, defending enemy. It is rare for an entire alarm (large force) to arrive on the fire scene simultaneously at the onset of an incident. More commonly we see single engines, trucks, or rescues which are “small attacking forces” arriving “early in the engagement” to battle a “much larger or well entrenched opponent.” The “longer the engagement continues” the more likely we will become reliant on increasing our numbers as the “outcome will be affected by the will of the enemy” (Brush, 2012).

In all eight of the external apartment building fires my department experienced, the initial attack was made by taking a handline (usually an 1 ¾”) to the interior and trying to hit the external fire from the inside out. In seven out of eight instances this tactic was unsuccessful, and by the time the ceiling was eventually opened, the fire was in control of the attic, being fed by the still burning external fire and beyond the ability to control it with handlines from below. All personnel are then withdrawn from the interior and the strategy is switched to defensive.

We are often taught to find and apply water to the seat of the fire and then to check for extension in surrounding voids and spaces. In these incidents, the seat of the fire is on the exterior of the building and the extension is in the attic. So, this begs the question of how much can a single four-person engine company physically accomplish to knock down the external fire while immediately getting a line to the top floor of the apartment building and getting water into the attic?

This question lead to multiple timed practical experiments with different crews to see just how long this would take, in order to create a baseline for future tactical training. Considering the crews did not practice the evolutions prior to the timed drills, the results were pretty amazing! 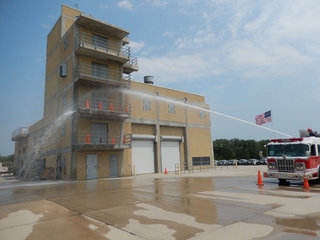 The experiments were conducted in and around a six story training tower and were designed to evaluate the effectiveness of a single, first arriving four person engine company to initiate an external offensive fire attack with the apparatus mounted deck gun (blitz attack), flowing 500-600 gallons per minute for ten full seconds, on a simulated fire area involving the second and third floor balconies of an apartment building with fire impinging upon the roof line, while the following tasks were also being completed:

That sounds like a lot to ask of a single company and something that would take a lot of time to complete. The Engineer/Driver and one firefighter are initially dedicated to getting the deck gun operating and directed onto the external fire. Following knock down of the external fire, this firefighter then dismounts the top of the apparatus and hand stretches a 5” supply line approximately 75 ft. to a hydrant and makes the connection. The Officer does an initial exterior size up and then does a quick interior recon to see what conditions are like inside the stairwell. The second

firefighter deploys a pre-connected 2 ½” line to the front door and begins to advance it upstairs dry, if conditions permit, with the help of the officer. (NOTE: In all of the external apt. fire incidents experienced by my department the interior conditions were very tenable, with conditions on the top floor consisting of light to moderate smoke, but with the fire still on the exterior of the building. So, a dry apartment stretch to the fire floor was possible). Once the hydrant connection is made, the deck gun/hydrant firefighter can help with advancing the 2 ½” up to the fire floor. (NOTE: While things like hydrant location and apparatus access to the building can vary and complicate this operation, and normally firefighters would be using SCBA while advancing the line to the interior, we were simply trying to set a baseline to see what was physically possible and how long it would take to

A second comparison set of drills was also run that were identical to what is described above, with the only difference being that a 2 1/2” shut off valve was placed on the deck gun to allow the stream to be opened and closed from the top of the engine while directing the deck gun.  Normally, a four person engine company must dedicate one person, the Engineer/Driver to operate the pump while another firefighter mounts the top of the apparatus to position and direct the deck gun stream. Use of the gate valve allows the Engineer/Driver to put the pump in gear, charge the deck gun and build the appropriate pump discharge pressure without flowing and wasting water from the deck gun, and then mount the top of the apparatus to position the deck gun, open the gate valve to flow water and direct the stream as needed. This allows the other firefighter to assist with other tasks such as securing a hydrant water supply or advancing an attack line into the building and up the stairs.

The time started for each drill when the engine pulled up and stopped in front of the building. Time was noted for each milestone achieved during the drill and the time stopped when all tasks were completed and water was successfully flowed into the attic above the 3rd floor.

A side by side comparison of average times between the drills with the 2 ½” gate valve on the deck gun and those without are as follows:

Without the use of the gate valve on the deck gun, crews averaged a total time of 296 seconds, which is less than five minutes (4min 56sec) to accomplish all of those tasks, which is impressive in itself. However, crews that used the gate valve on the deck gun were able to complete all of those tasks in an average of 201 seconds (3min 21 sec), which was over a minute and a half quicker!

Whether or not you choose to use a gate valve on your deck gun to facilitate an initial blitz attack at a fire, the bottom line and overall message here is that a small number of firefighters arriving on or with the 1st engine has the potential to be a powerful force to be reckoned with! Train your personnel to assess and evaluate the situation found, understand the capabilities they have with the resources at hand and prepare them and their equipment to be able to arrive and pack a powerful punch. If you believe they can, they will believe they can, and more importantly…they will!

Part 2 of this two part series will take a look at the same situation, except it will involve a lack of access for the 1st arriving engine to pull up on the side of the apartment building where the fire is showing on the external balcony, so use of the deck gun to initially attack the fire will not be possible. To evaluate this situation, another set of timed drills were run having the crew deploy a 2 ½” attack line around the side of the building to attack the external fire.