RIT, RIT, RIT.  We read a lot of the same information about it, and we’ve been reading it for a long time.  Specifically, “proactive RIT” has been pushed for over a decade now.  RIT is a good thing; having a team on standby to dive into the fray and rescue one of our own is absolutely one of the many priorities at most fires.  But let’s dig a little deeper into this dominating theme in RIT training.

Proactive RIT means having a RIT crew that doesn’t just stand in one spot like a bunch of lawn shepherds.  Instead of watching the fireground move around them, a proactive RIT will handle a number of tasks on their own, with the goal of making the building softer and safer for rapid egress or RIT operations.  Included in those proactive tasks are:

Look at that list.  Holy cow, that’s a lot of work for a single crew to be doing at the same time.  But what are all those tasks?  Truck work.  That’s nothing but truck work.

We’ve gotten to the point in our national fire department culture where we make RIT a priority ahead of truck work, and then we tell RIT crews to do truck work to make up for it.  Instead of staffing units and alarms with the proper numbers of firemen and fire trucks, we tell the one crew that’s supposed to be fresh and ready to go that they should instead be picking up all the fireground slack.  We need to realize that we’ve been bamboozled here.  Proactive RIT is nothing more than an attempt to cover for poor truck company staffing.

We need to stop using our rapid intervention teams, our go-to rescue group, as our fireground utility players.  We need to adequately staff the initial companies or dispatch a quantity of units such that we have a full lineup when the clock starts.  You wouldn’t ask your field goal kicker to set up on the offensive line for the whole game, then come in and try to kick a game-winning 60-yard field goal.  But that’s what we’re doing on a regular basis when we ask RIT to throw ladders, force doors, and remove plywood and bars.  We’re asking them to perform hard work for a good chunk of the incident then be ready to still make a high-stakes, highly physical clutch play at a moment’s notice with lives hanging in the balance.  That’s not possible.  But in many places, those are the unrealistic expectations that make up the reality of RIT.

So what can be done to combat this potential problem?  For those departments where it’s an option, call for more units while you’re still en route.  A single truck, a manpower unit, mutual aid.  However you have to work it.  Once on scene, do not waste truck resources on engine tasks; if you’re assigning truckies to assist with fire attack, you’re doing it wrong.  If you don’t have all the necessary truck functions covered, then don’t assign RIT.  Just assign those “proactive RIT” tasks to a truck company, and call it what it is: truck work.  When the work gets done, the fireground still gets safer, and the likelihood of even having a fireground emergency decreases.

If you do have all the important fireground tasks handled and still have personnel left over, consider RIT.  And then consider that you probably don’t have enough personnel left over for RIT.  The fire service has known since Bret Tarver’s death in 2001 that even the simplest RIT activation will take between 6 and 12 rapid intervention team members to find, assess, package, and remove a downed fireman.  In Tarver’s case, there were 12 MAYDAYS during the RIT response and recovery.   In the study of the LODD, Phoenix Fire Department found that RIT is anything but rapid.

Studies of LODDs and RIT activations have shown that there needs to be a division of labor amongst RIT.  The initial response should locate, assess, and package the downed fireman, while the second team does the actual removal.  And in fact, that second team may need relief before the mission is complete. 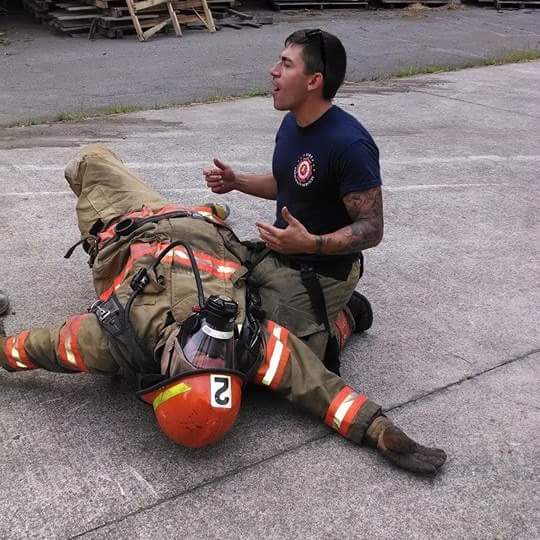 Guys, stop laughing every time I say the word "package."

If you and your two-, three-, or four-man crew are tasked with RIT, don’t be afraid to request more manpower to fully staff your team.  The larger the incident, the larger the team should be.  A geographically large or complex building will require more than one RIT, simply for the distance one team would have to cover by themselves.  Requesting more personnel is your obligation as a company officer, for the safety of your crew and the success of their mission.  It falls on the incident commander to provide the resources necessary, and some chiefs need a little nudge to remind them that they can call for units that didn’t come with the initial alarm.

For those of you in departments where heavier staffing or response is simply not an option, I feel your pain.  You have to make the most of minimal resources and still get all the same things done as large metro departments with 6-man staffing and firehouses every few blocks.  But we, as a fire service nation, have to continue to fight for better staffing on initial alarm companies so that we don’t have to rob Peter to pay Paul.  We have to start the work of changing our RIT culture back to one where RIT is more like a military quick reaction force.  QRFs gather intel and stay at a certain level of readiness while troops have the potential to encounter a rapidly developing conflict.  They don’t go out on patrol or get tied up doing other errands and tasks while maintaining that readiness.  Likewise, our rapid intervention teams can perform size-up and intel gathering functions to best maintain their readiness without becoming involved in normal fireground operations that should be handled by non-RIT companies.  And that’s the reality of RIT.