It used to be that ventilating residential fires was pretty straightforward.  Even today, the process hasn’t changed, but the difficulties encountered while completing the task have multiplied.  Difficult roofs aren’t new; commercial flat roofs have long been a tough cookie to crack, with an infinite number of roof material combinations and challenges that pop up right in the middle of the cut.  With today’s engineering capabilities and ever-changing building construction technology, residential pitched roofs are starting to look a lot different than those that we were venting even five years ago.  I’d like to talk about some new and old roofs, how they can trick vertical ventilation crews, and how we can avoid some of the tricks before they cause unexpected problems.

First off, let’s talk about basic construction types.  We all know the difference between traditional ridge & rafter “legacy” construction and truss construction.  We know that the wood itself is different, as is the way that wood is put together.  We know that trusses came into use in some areas of the U.S. as early as the 60s, with widespread use coming about in the 70s.  Over the years, however, I think many books, periodicals, and instructors have led students of the fire service to believe that anything built after the advent of trusses WILL be made of trusses.  I would like to point out that even today brand new houses are being built with legacy construction.  I live in one.  A 2007-built, 2-story home with TJI floor joists and a traditional ridge & rafter roof, pictured below. The age of a home cannot be used as the sole size-up of the roof.  Old and new conventionally-built roofs can have ridge vents just like truss roofs.  Likewise, new truss roofs can have false rafter tails.  At a glance, these rafter tails can look like the edges of legacy roofs with 12” or 16” rafter spacing, when they actually have 24” spaced trusses under the roof.

Then there are construction methods that one would not normally predict on a residential roof system.  Steel trusses or TJI beams instead of rafters are possible.  Cold roof systems are becoming more popular for residential roofs.  Cold roof systems often involve a corrugated metal deck over the roof trusses, with layers of insulation capped off by normal wood decking a architectural shingles.  The idea is to allow airflow under the roof decking to aid in cooling the attic space during the summer.  These cold roofs can also be made of prefabricated panels that are retrofitted to the existing structural decking.  Again, after the roofing is laid, there is no outward indication that the roof might pose any issues to firefighters. 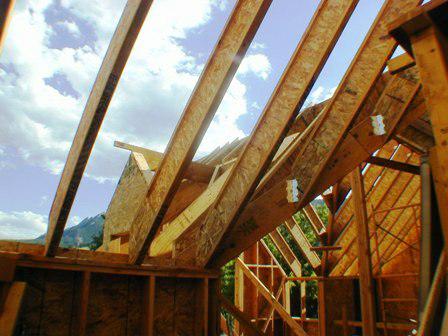 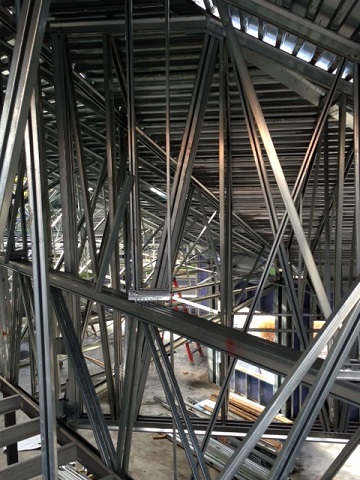 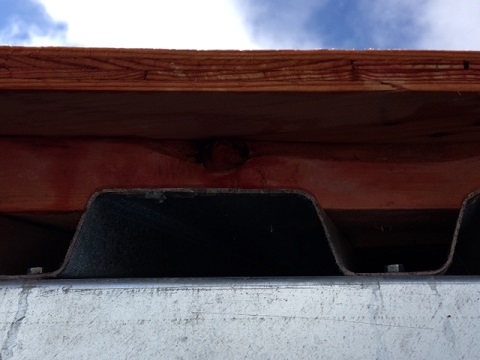 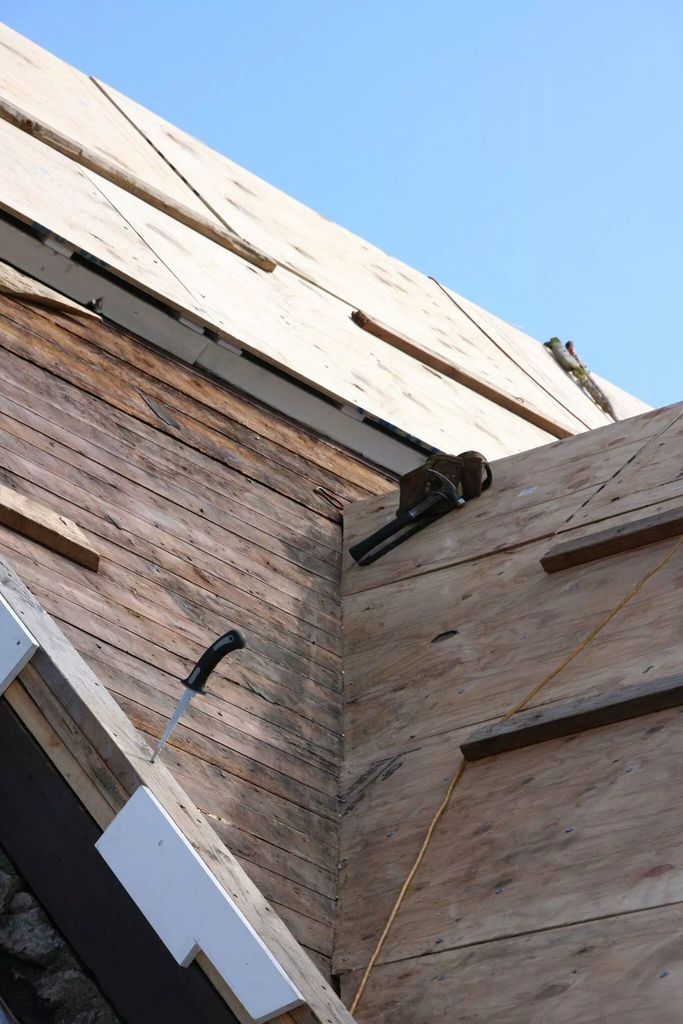 Here you can see a prefab cold roof panel retrofitted to an existing roof.  Note the 4" thick block of foam, the air gap, and the plywood decking. 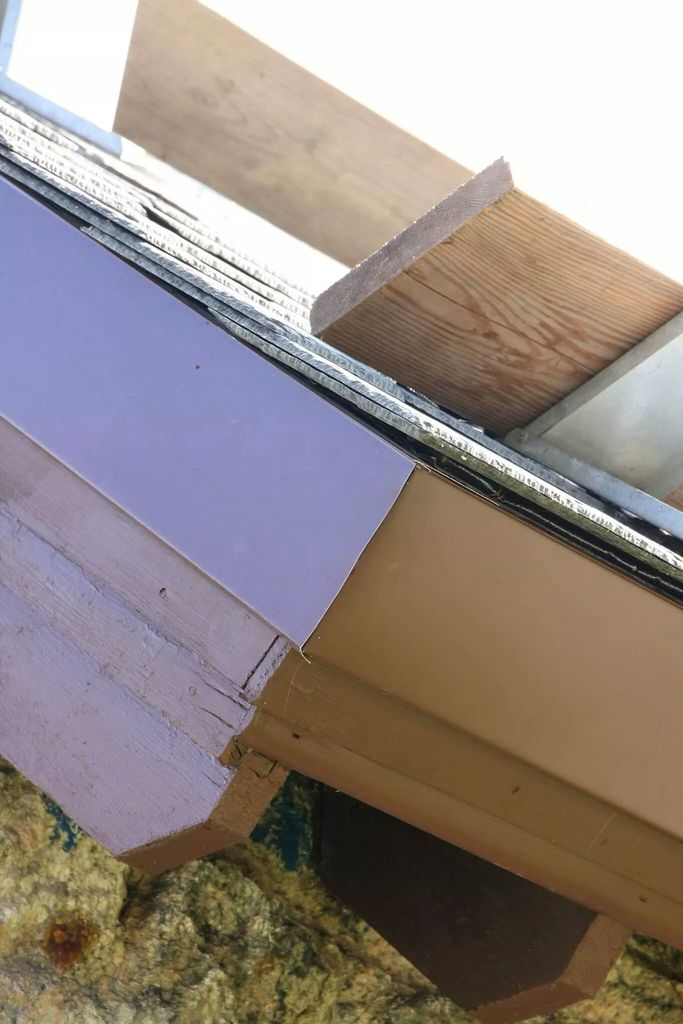 Once shingled and trimmed, there's no indication that the cold roof is even there.

While we’re still under the roof, let’s talk about spray foam insulation.  This is becoming more frequent, so we’re bound to have to ventilate these roofs more often.  These foam-insulated attics are sealed air-tight.  They may show limited or no signs of fire from the outside.  They may hold a lot of heat and smoke.  The insulation is sprayed at least 12” thick on the underside of the decking.  Even if every support member burns out, the insulation can support the entire roof.  Sounding may not indicate anything until you punch through the decking with your body. 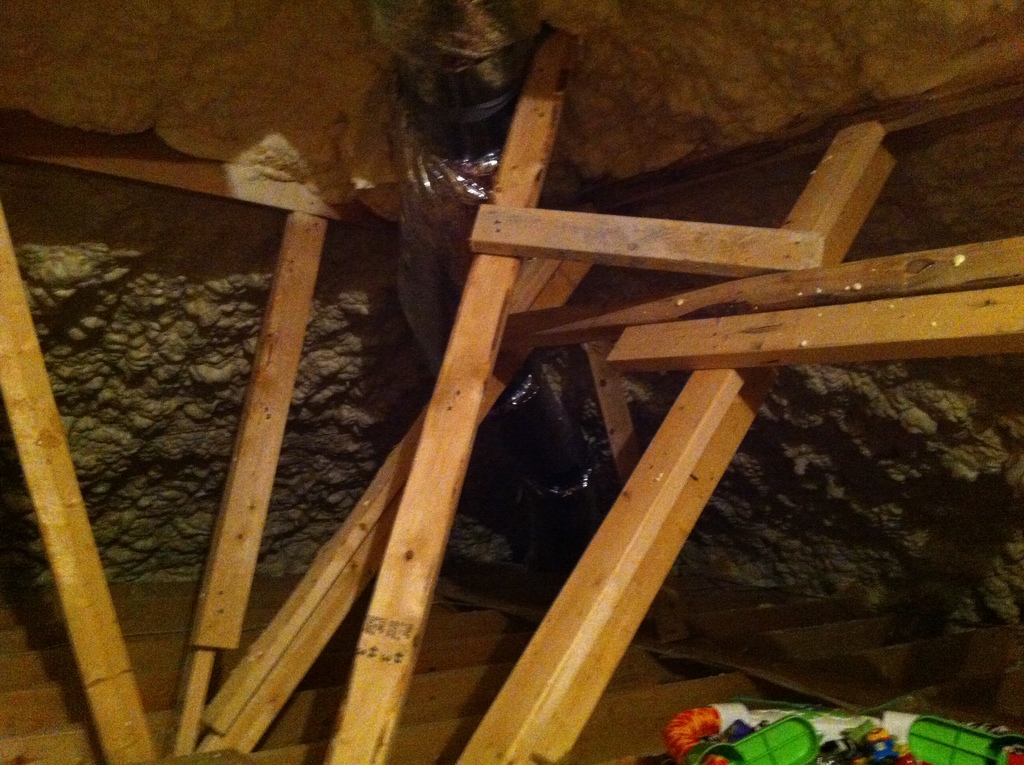 This is the attic of a home built in 2013.  Note the legacy construction.  Also note that the roof rafters are not visible due to the thickness of the foam.

Homeowners are trying to save money and stretch the life of their roofs for as long as possible.  Where the most common roof surface for decades has been the standard 3-tab asphalt shingle, there is a growing popularity in metal roofing.  No longer just offered in the classic vertical panel that evokes an image of the rural farmhouse, metal roofing has evolved to emulate nearly any type of roofing material in appearance.  Architectural shingles, clay tiles, slate tiles, and cedar shakes all have a metal roof equivalent that can look pretty darned convincing from the front yard.  These light gauge roofing materials should not add much difficulty in ventilating, but may require a change in game plan once their discovery has been made.  Though there is usually a texture applied to the metal shingle/tile roofing, rain or winter weather can still make these roofs slick, so extra caution must be used. 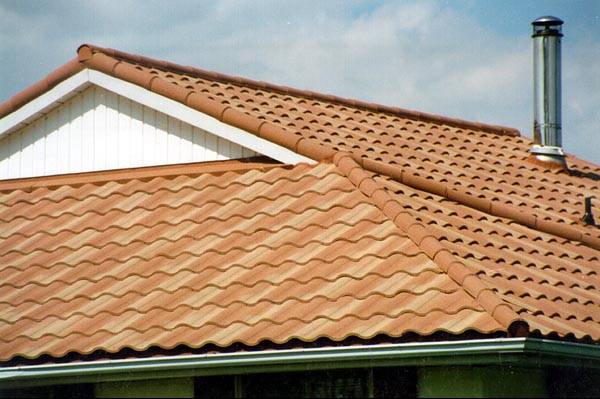 Along with metal that looks like other materials, there are now solar tiles for residential roofs that are designed to blend right in with their traditional roofing counterparts.  Architectural shingles and Spanish tiles have a solar tile equivalent that might be easy to spot during daylight.  If you’re on the roof at night or in smoky conditions, however, you may never spot them.  Solar arrays offer their own degree of hazard, even at night, and must be dealt with accordingly.  Specifically, don’t step on them; don’t break them; don’t cut them; and don’t mess with any wires or conduits running to them.  There is a risk of slipping if these solar tiles are stepped on.  Solar arrays can be safely worked around and next to, and there is no danger of electrocution from putting out a fire on or near them.  If wiring and conduits are not readily visible, it is prudent to move the vent location to an area where risk of cutting high-voltage wiring in the attic is reduced.  The opposite side of the peak may be best, since the conduit will typically run toward one end of the home until it drops straight down to the transfer switch. 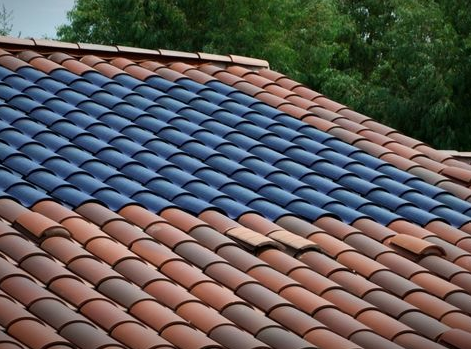 Clay tile roof with photovoltaic cells. Would you see this from the ground at night? 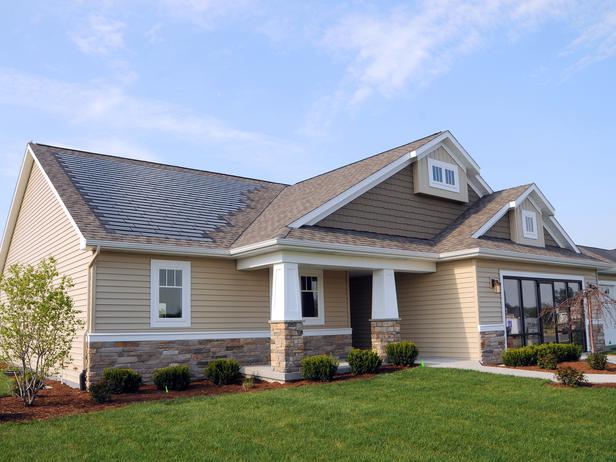 No discussion about deceptive pitched roofs would be complete without talking about roof-overs.  A roof over is exactly what it sounds like: a roof over another roof.  Just like rain roofs built over existing flat roofs, roof-overs on pitched roofs can be incredibly frustrating to firefighting efforts if not recognized early.  Some roof-overs on pitched roofs simply serve the same purpose as a rain roof - to cover a leaky roof and keep the elements out.  Those "rain roof-overs" may follow the same pitch as the original roof or increase the slope to aid in drainage and snow handling.  Some roof-overs aim to improve the aesthetics of a structure.  Instead of removing the old roof, the new roof is built right on top.  An aesthetic roof-over can be a partial or complete covering of the original roof, and it may be the result of repairs, remodeling, or additions to a building.  The new roof may or may not use the same type of construction as the original roof.  For instance, a trussed roof would commonly be added to or covered by a roof using legacy construction.  False dormers are an aesthetic feature that may be original or added to a roof.  Unlike true dormers, they do not lead to an attic or living space.  They are a void space above the roof sheathing.  In my neighborhood, most of the false dormers are evident by the window manufacturer's stickers that are still on the insides of the locked windows.  It may also be possible to see the exposed plywood or OSB through the window of a false dormer.  Remember that older flat-roofed apartments and commercial buildings are particularly prone to receiving pitched roofs when new owners want to reface and remodel the buildings to bring in new business.  These brand new pitched roofs may be any kind of construction, and they can feature false dormers and every other kind of pitched roof trickery. 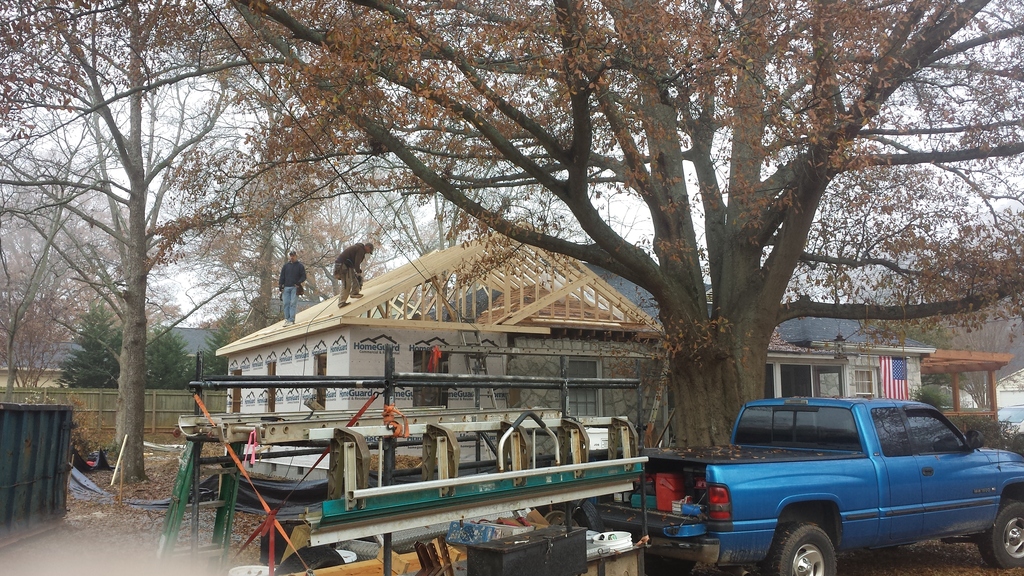 This partial roof-over is built on top of the existing roof to cover an addition to the house. 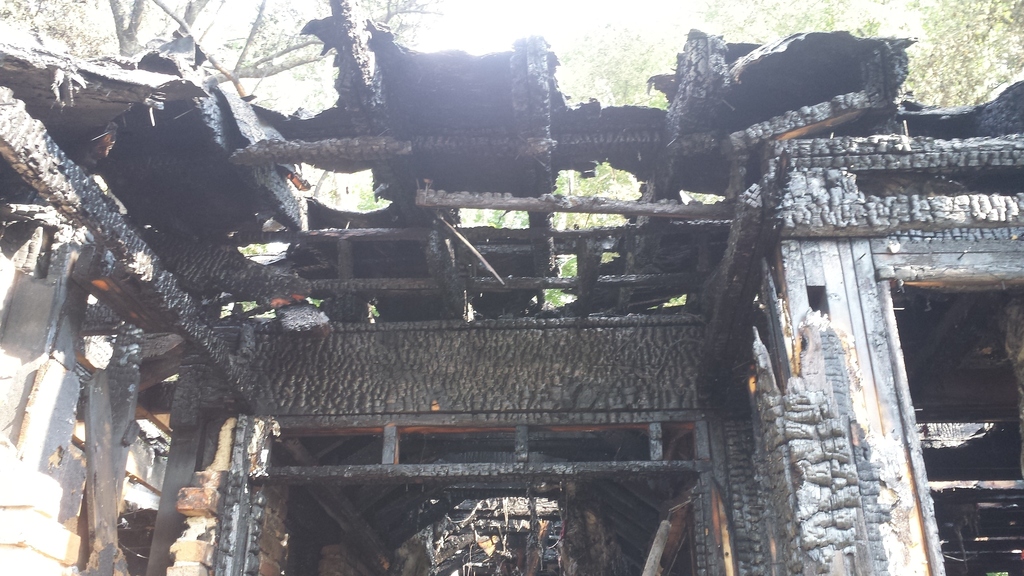 Try as we may, it's hard to keep up with all the new construction in our territory.  Additionally, it is not possible to know about every single remodel and roof-over in our territory.  Even less so for the second due and mutual aid territories we serve. So what do we do to prevent walking around on a roof that we think is one thing, but it’s completely different?  For starters, solid sounding techniques, before you even step off the ladder.  If you’re not sounding that roof like you’re trying to hammer nails about 4 feet in front of you with your hook, you’re doing it wrong.  It’s not tapping or stabbing with the tool at your feet; it’s a slamming of the tool head in advance of you and your crew.  If you’re expecting one type of roof, and you hear the sound of a totally different one, it should make you stop and reconsider what you’re working over.  The unexpected sound of sheet metal or solar tiles would indicate a necessary change in operation.  This is a continuing evaluation as you move across the roof.

The inspection cut allows you to figure out several things about your roof before you get too far from the ladder.  It tells you what kind of roof support members you have, their spacing, and their direction of travel.  You will quickly know if you have 2x8s 16” on-center, engineered trusses 24” on center, or something even stranger.  Since new construction methods appear all the time, you can know immediately if you’re working over a system that will provide you with ample support, for a longer amount of time, closer to the seat of the fire.  There are occasions, especially in residential or extended-stay motels, where a beam may separate each room at the roofline, with rafters running across the span instead of from ridge to gutter.  An inspection cut would quickly identify this odd rafter direction, making a change in cut much easier to figure out ahead of time.  It’s hard to roll rafters when you’re unknowingly cutting parallel to them.  Inspection cuts also tell you the depth of the roof decking and roofing material.  You know right away if there has been a roof-over, leaving two layers of roof through which to cut.  You’ll know if there is a foot of spray-foam insulation supporting the decking.  You’ll know if there is a cold roof that may require a different saw or blade than you brought to the roof.  Knowing these things before you’re out over the fire is of immense benefit.

Building construction practices are constantly changing and evolving to meet the demand for cheaper building materials and reduced energy costs for the occupant.  Construction methods and materials will probably never change to be safer for firemen to work over or under them when they’re on fire.  As much as we try to stay informed of the latest and greatest, we can never know every new thing.  Nor can we know which new and old houses in which these materials have been used.  With two major tools, though, we can quickly educate our roof crews on the spot.  Proper sounding and a quick inspection cut will keep you from getting caught off guard by deceptive roofs.