Revenge of the Nerds; Why do we have firefighter cliques?

While perusing several of the social media sites, I’ve noticed that there seems to be some nerd-bashing going on in the fire service these days. What do I mean by nerd bashing? Maybe not complete nerd bashing but definitely some separatist bully-like behavior between the jocks and the geeks. While recently attending my wife’s 20 year high school reunion and meeting many people that my wife had given me the scoop on, prior to introducing me to them. I started to notice that many of the geeks had become successful professionals. I than noticed that the jocks who all the girls had obsessed over in high school (including my wife) were overweight and mostly unsuccessful. The jocks were no longer “running the game”.

It was an entertaining evening to say the least and I started to reflect on my own life and character. As I look back, I was one of the kids that wanted to be cool and hang with the jocks. But instead I found myself in the middle. I had plenty of friends and hung out with both the jocks and the geeks. I was in the same accelerated classes as the geeks, but I enjoyed the after school extra-curricular activities and hung with the jocks during those times. It’s no surprise to me now that I ended up choosing a career as a firefighter, where you have to get along with everyone.

I’ve also noticed that not only on my own job but on many others there are a lot of younger firefighters that are in search of this “Salty Guy” persona. And they seem to follow those that also have that Salty attitude. The guys with this type of attitude seem to be a lot like the Jocks. They are trying to run the game with their ego’s and so-called experience. They’re awesome; just ask them because they will tell you!

So who are the Geeks? The geeks are the ones like Steve Kerber- UL-FSRI and Dan Madryzkowski- NIST Fire Research. Neither of these guys will deny that they both have a super-sized propellers over their heads, but they are also firefighters. Wait a minute? Why have these guys been winning all of the awards at FDIC? How can geeky firefighters exist? Were too cool for that! It's not cool to be educated, it's much cooler to be Salty.

Take a look at your fire service surroundings. We are so cool! Cool shiny red trucks with cool shiny wheels, your cooler if you work in a big-city, cops want to be like us, and the list goes on. We breed the jock or salty guy attitude and we wonder why we have all of these so-called cliques? Because that’s how we have always done it and we continue to embrace it.

I was fortunate to start under a great officer, that was a no B.S. kinda’ guy! He was probably the most experienced, well-respected individual in the entire department. But he was real, he didn’t try to create a salty guy persona, he didn’t need to. He was more of a professional than that. He taught me to do things the right way. Not because they were cool but because they were the right thing to do. Doing the right thing is not always the cool thing to do, but it’s often the most professional thing to do.

It appears to me now that if we need to have separation by cliques, I probably fall into the geek clique more than the jock clique. Which is weird to me because geeks by definition aren’t usually two-time Ironman finishers! However, I matured over the years and was willing to overcome a salty-guy ego and evaluate myself to learn that I was wrong in the past.  But it’s more than just evaluating my own character. As an officer, I realized that my actions are always being evaluated by the younger firefighters. I have to do the right thing and try to show them what being a professional firefighter is all about.  Since becoming heavily involved with the UL Firefighter Safety Research Institute. I’ve been fortunate to learn from a group of professionals that wants to the do nothing more than the “RIGHT THING”. In my opinion that’s what being a professional firefighter is all about. I ask you to take an honest personal evaluation and see if you need to make a change to do the right thing.  Let’s get rid of the cliques and fences that are being built. Let’s respect each other and learn from one another. Professionals do the right thing. We don’t have to disregard our traditions to become a smarter, safer, and a more professional fire service.  Let’s Stop Believing and Start Knowing!

A video parody for your personal enjoyment by B Nugget: I'm Salty and I Know It

You don't need to be this guy to be a firefighter- (photo credit: Paul Combs) 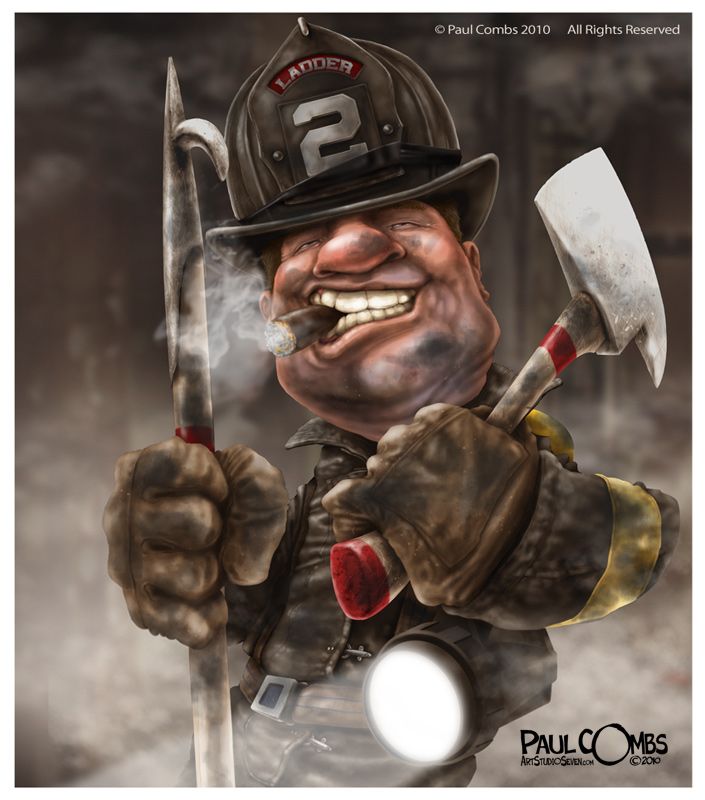 Comment by Sean Gray on November 24, 2014 at 10:15pm
Chief Schultz- Thanks for taking the time to read it and thank you for offering your opinion. While we have a difference of opinion. I still respect your opinion and we will just have to agree to disagree. Stay Safe Brother.

My comments are not intended, in any way to discredit you as a person or how you feel about an issue. I felt compelled to offer a different view (the reader) where it appears to me, your own argument against cliques actually encourages them. Its just my observation, so take it for what its worth and thanks for letting me share.

My commentary is not an attack on you as a firefighter or your opinions. What I would like to offer, is the dichotomy of your anti-clique argument. I would agree, like local politics, we (the fire service) are finding ourselves with far too much partisan extremism on many topics. I too can be an extremist on some issues but I never apologize for those opinions nor demonize those who disagree. If what I believe is unpopular, that’s ok, I own it 100%. I also try to never deflect the criticism of others (for my opinions), by calling for a cease fire, as soon as the heat comes my way.  I am confident in my ability to articulate my stance, in a way that attacks the issue, without attacking the people who feel differently.

The premise of your article focuses on the negative outcomes of biased assumptions of others (those who disagree with UL studies) which have caused cliques or groups to form, which you are against; yet throughout your article, you intentionally or unintentionally create lots of partiality, even to the extent of  picking a side (nerds).

You start with your experience at a high school reunion in which you describe the jocks as “overweight” “mostly unsuccessful” and “no longer running the game”. Are you creating segregation by negatively categorizing a group (the jocks) through personal attacks (overweight and unsuccessful)? If that’s not enough, you make sure it’s very clear that they are “no longer running the game”. This insinuates that they (Jocks) are powerless, weak or wrong. Is this what you refer to as the “right thing” to do as a leader?

Next you take a shot at “young guys”. This is categorizing (or placing people in to cliques). You label the group as searching for the “salty guy” as if there is something wrong with being salty. In many places, salty means experienced, wise, and knowledgeable. Which part(s) of that do you not like or think is valuable to the service? You say people in this category are a lot like the jocks, which means, by your own definition, they are unsuccessful and no longer running the game. You say of this group (jocks, salts, and young guys) “they are trying to run the game”, you make reference of their “egos” and “so called experience”. Again, is there something wrong with experience or are you insinuating that their experience is no longer relevant? Are you saying that only young guys, salts and jocks have “egos”? I hope not, that would be creating cliques.

In the next paragraph, you categorize Steve and Dan as propeller heads, again, creating cliques. You talk about the well-deserved awards they received from FE and others (which is worthy of recognition) however you are communicating it in a way that appears to want to prove jocks, young guys, salts (and whatever other categories/cliques you can identify) as being wrong, incorrect or inappropriate. Is this the “right thing”? You end the paragraph by again, revealing that you have a issue when it comes to people valuing “salty”.

If you hadn’t created enough partisanship you strike again with negative labeling of working in a “big-city” as if that’s a negative thing or that everyone who works in a “big-city” drinks the same kool-aide and thinks they are “salty”. This would be called stereotyping or categorizing (creating cliques)

What I find most ironic is the way you join the “nerds” (you created this clique not me) and then, in an act which could be construed as “egotistical”, throw out that you are a two time iron man. Are you trying to dispel the stereotyping of nerds after stereotyping jocks, young guys, salts and city fireman?

I could go on for another two pages, but feel I have made my point. I will end on this note. You end the article, by proclaiming that since being heavily involved with the UL studies group, you have determined that they are “professionals and want to do nothing more than the RIGHT THING”. Again, intentionally or unintentionally, you draw a line in the sand and segregating those who agree with UL vs those who disagree. You are not only creating separatism, you are making the assumption, that anyone who disagrees with UL is personally attacking the character of those involved from UL.

There is nothing wrong with cliques, groups or those who disagree, in fact it is a social norm. Your challenge as an officer, is to create a work environment, where people understand the difference between uniformity (everyone needs to drink my kool-aide) and unity (one team, diverse players, focused on one purpose)