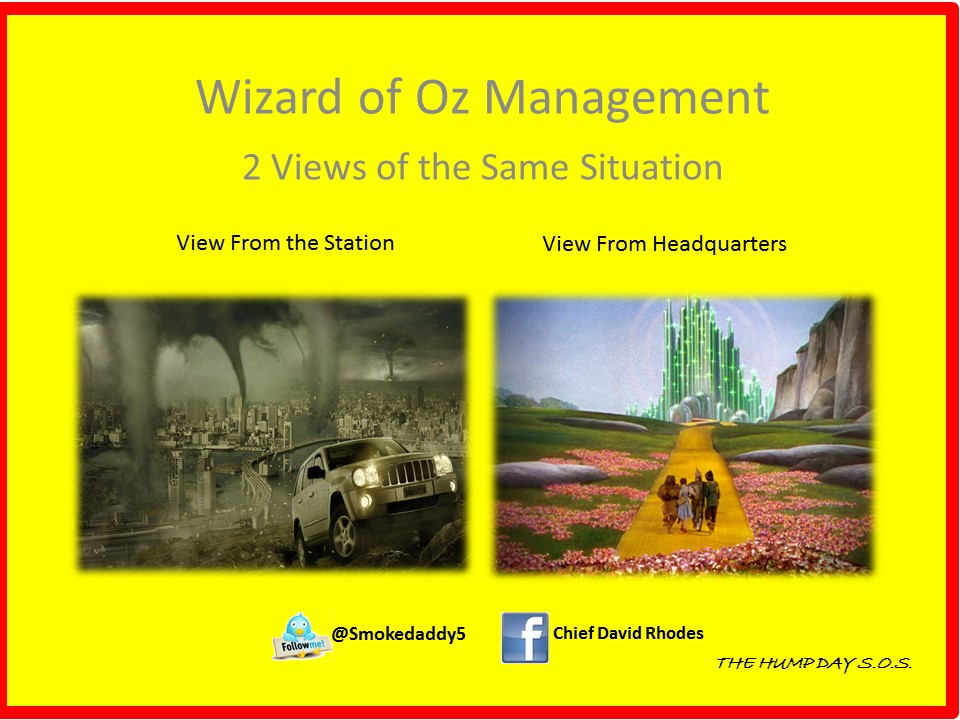 Have you ever thought to yourself, “What in the world are they talking about? Do they work for the same department?” Maybe you are stuck in the world of Wizard of Oz management. It often boils down to perception. Those in the station are closest to the work (responding and assisting the people in the community). Those at headquarters are closest to the politics and political leaders. This is the clash and ultimate disconnect in some organizations. Even the most experienced field operator will begin to lose his sense of how things really are after being away from the work for about two years. You don’t totally forget but you are not suffering the consequences of the decision making above so you don’t have the same situational awareness and sense of urgency to resolve the issues.

U.S. Army General George Patton said that, “No good decision was ever made from a swivel chair!” He had experienced the swivel chair leaders that were clueless when it came to the work of the battle or the work of the troops. He frequently got out of the office and up to the front lines to see for himself and talk to the troops doing the work. The headquarters staff can get so bogged down in the operation of the bureaucracy that there is little time to take care of the basic needs of the organization. (Not a justification just pointing out a reality in some organizations that are not focused on the delivery of service and are more focused on the delivery of the organization) In the worst case an organizations workers cry out in need (of supplies, guidance, support, etc….) only to be dismissed as whiners and complainers. As things spiral downward and the problems cannot be ignored any longer, the staff is quick to turn the blame back around those who are closest to the work. (We are always busy up here at headquarters but you guys just sit around the station, play games, cook and complain about us). Busy doesn’t equal effective or results.

As you move up in the ranks don’t become a headquarters recluse. Get out of the office and visit the ones that are doing the work. While their perspective is not always 100% correct, their perspective is their reality and if you ignore that you can’t be successful. For those who aren’t moving up for whatever reason I guess you are left tapping your heels together 3 times and saying, “There’s no place like the station, there’s no place like the station!” For those of you who are stuck at headquarters, try the same!