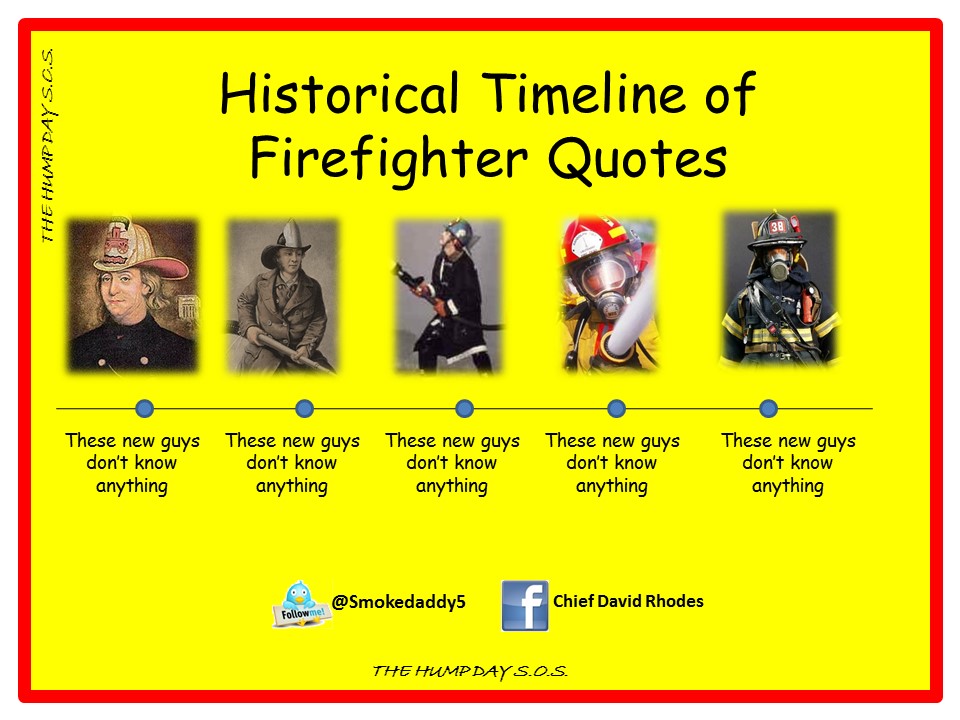 This week is another retro-SOS from my original first few months. These were pictures only so now that we are broadcasting out to the FE community and in full blog mode I will add some commentary. Again, if you already saw this one I hope you get another laugh or affirmation that you are not alone in your thinking.

Each generation thinks that the new generation isn’t quite up to speed on things. This is not unique to the fire service but if you have been around long enough you have heard it over and over again. The truth is that at some point we were the ones who didn’t know anything (maybe we still are) and someone was shaking their head watching us work thinking, “Where do they get these guys?” This was depicted in the movie Backdraft as the older brother constantly belittled his rookie (probie) younger brother as soon as he was assigned to the station. At the end of the movie the company is responding to a fire and the younger brother, now with a little experience, is watching a newer rookie getting his coat on. “You’re doing it wrong!” says the slightly past rookie status member. Then he proceeds to help him out and show him what he is doing wrong. (For you new guys "Backdraft" was a movie filmed in color in 1991 and was available on VHS. It was directed by Opie Taylor a.k.a Richie Cunningham)

The point I want to make here is that we can’t leave out that last step. We have to understand that recruits are usually not bringing a vast experience base with them to the station. Their experience is limited to training facility buildings and training that is in most cases somewhat sterile. The company officer and crew can’t stop at, “These guys don’t know anything!” and must realize that what 's missing is experience. Sure there are some that slip through and maybe they don’t have a good grasp of even the basic skills but that first year will really set the tone for their career. Do they come into work each shift knowing that they can’t do anything right and never gain any confidence? Do they come in knowing that they are a long way from mastering the knowledge, skills, and abilities but their officer and crew is going to teach them a few “tricks of the trade” today?

The guy who is never shown anything and can never do anything right is going to focus his efforts in off duty part time work and begin to lose interest in the trade of firefighting. Maybe he becomes a loner hiding out in the bunkroom taking online classes. The next thing you know he has finished his degree and becomes the fire chief and uses his position to make sure you are miserable. (Remember when the kids that didn’t get picked for kickball grow up and end up in charge, they usually have a few axes to grind).

We all learned how to do what we do from someone. Even though we don’t often admit it or we have been doing things so long that we can’t remember who taught us what we know, we didn’t just wake up with the knowledge and experience one day. Pass your knowledge and experience on and set the new guys up for success not for failure. Remember the new guys only know what we teach them and in a couple years they will be responsible for teaching someone else!