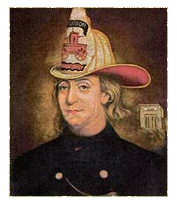 There is a saying that states, " With knowledge, comes power." History is an important part of that knowledge. Recently, I attended a class on the history of the fire service. And with the exception of the instructors assembled, everyone in that class had 5 or less years of experience. I represented the dinosaurs with 30+ years. A portion of that class involved us watching a video related to the American Fire Service. As I intently watched the video, I couldn't help but notice that around the classroom, there wasn't too much interest or excitement. Now, to be fair, I realize that not everyone may like history as I do and that's okay. Having said that, history does have value when it involves your vocation or even avocation. You have to know where you came from in order to know where you are going. The American Fire Service goes back to the late 1600's. The first organized volunteer fire department was organized in 1736. It's organization was credited to Benjamin Franklin. Ben Franklin is commonly referred to as America's first fire chief and deservedly so. Chief Franklin had great insight, vision, wisdom and intestinal fortitude. Those attributes became and are valuable not only to the fire service, but to America's freedom and independence as well. The more I read about Chief Franklin's accomplishments, the more I became to realize that his face on a hundred dollar bill is so much more valuable than the bill could ever be, when you take into consideration what he did for our Country and our Fire Service. As I continued to read about Ben Franklin's in the fire service, I noticed that there were similarities in my background as well and maybe yours too. Ben Franklin had a sense of community. He also had a "call to duty". He sought to give back to his community and his country in so many ways. Fire is a natural phenomenon. If the right combination of heat, fuel, oxygen and the chemical chain reaction come about, fire occurs, Fire can occur spontaneously as well. Humans did not invent fire. We did, however, learn to use it and make it beneficial for us. We cook with heat, use heat in our homes for the winter months and in our history, we have used fire on the battlefields. Sometimes, often more than we would like to think, fire is used incorrectly and illegally and lives and property are lost as a result. Chief Franklin noticed ways that were different between how fires were fought in Boston and how they were fought in Philadelphia. Noticing those differences, he used the newspaper that he owned and wrote an anonymous letter to the public. In that letter he warned and educated the public in saying " An ounce of prevention is worth the pound of cure". He urged his readers, his community, his nation, to take care and to handle "hot coals and scraps of fire" safely when using it and transporting it throughout their homes. He advocated that chimney sweeps be licensed and held accountable for their actions. He also noted that in Boston , their firefighters were members that belonged a particular engine and that a "club" of men ( at that time ), were charged with attending to all fires within their communities when they happened. Chief Franklin also wrote that through practice and regular meetings, firefighting skills would be improved. Through Chief Franklin's persistence and insistence, he formed a group of thirty men and in December of 1736, the Union Fire Company was organized. And just like the name infers, that fire company came together and agreed to fight fires together for the common good of all and therefore keeping their town safe from fire. As a result of that organization and just like the story of the Phoenix rising from the ashes into a rebirth, other fire companies were organized. We still see today, fire companies named  "Goodwill Fire Company " and The Fellowship Fire Company"  and the like. We still see the "Hook & Ladder incorporated into our names and "Fire Brigades" are still around because it's part of our history. The American Fire Service is filled with great pride, tradition and with dedication and commitment. We are fast approaching three hundred years old. We have seen many changes and advances in our history. Chief Franklin's message in that letter still needs to be delivered today among the people we serve and with the brotherhood/sisterhood in which we serve with today. Fire still kills more people each year in America that all of the natural disasters combined ! And while we have had a recent reduction in firefighter line of duty deaths, we still need to train regularly and continually develop our firefighting skills. It is our responsibility to be better than our predecessors and to try and live longer than them as firefighters because they were responsible towards us in laying the foundation before us ! Chief Franklin laid the initial groundwork and we need to continue to follow his lead. Let's be better organized ! Let's educate our citizens with fire safety and fire prevention programs and through the fire codes and pushing for residential sprinklers in new home construction. The American Fire Service is a large population of people. Remember that history is a part of our knowledge. Remember too, "With knowledge comes power". And if we use all of those attributes wisely, we can continue to great things for our communities and our Country ! Someone once said " There is no better time than the present !" Let's get back to work, honor the great traditions, keep them alive, but let's forge ahead and create new ones as we continue on in the fire service. Stay safe !