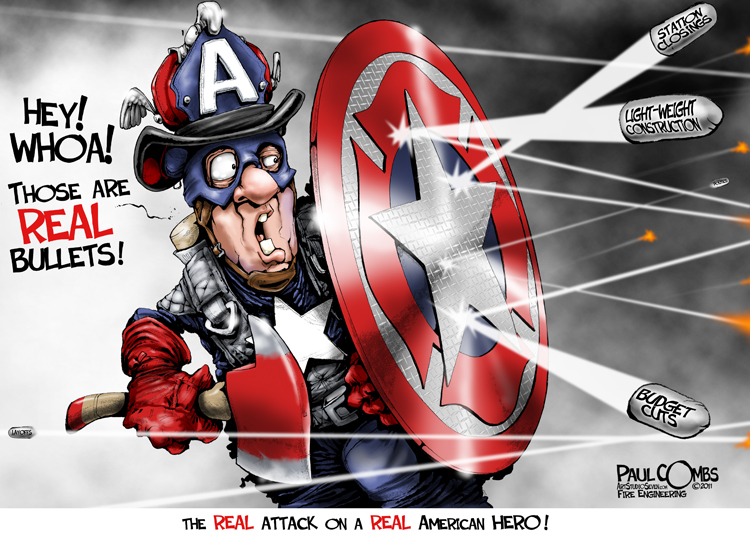 We Americans love our Hollywood heroes and icons, and Marvel's latest addition to this culture, "Captain America", fits the bill perfectly. Set in the 1940's, he battles his evil Nazi foes with all the swagger and chiseled abs tensile-town can muster. And being a superhero movie junkie, I watched my favorite childhood comic book hero kick some bad-guy a** with delight.

Is it a fun movie? Yes! Can I draw comparisons to today's fire service? Oh, you bet your three-quarter boots!

It is difficult to watch the public (and media) fawn over an imaginary Hollywood hero created to represent the "best" in American heroism and courage. Want to see a REAL American hero? People need to look no further than their local firefighter or police officer (or soldier, for that matter)! And our REAL public service heroes are under attack from forces much more powerful than the ominous Red Skull and his Nazi thugs.

Hollywood heroes are stoically courageous under special effects fire - but put them on an understaffed first-due engine responding to a heavily involved light-weight structure fire with possible victims and let's see how brave they really are. The bullets we face in today's fire service are relentless, and they are not CGI. They are very REAL and can kill - regardless of your chiseled abs!

Comment by John K. Murphy on August 8, 2011 at 8:30pm
Thanks Paul. Really appreciate your illustrations. You are so "right on"

Had a technical glitch in the post and had to delete and re-post. Below is a response by Chief John Murphy that was deleted - sorry, Chief!

"Paul - Captain America - my favorite hero as well. It's unfortunate that we find ourselves at this crossroads. We need more "hero's" to fight the battle at the political level. We are in the political gun-sights and the firefighters are getting sucker punched at every turn. Sometimes you want to ask those politicians so hell bent on cutting firefighters, stations and budgets, "who U gonna call" when your emergency occurs as there may be no firefighters available to respond. Then we'll see the fur fly in a rant against the absent service they helped to create.

Although I must say, we do not help ourselves when chiefs are making $150K to $200K per year and are still padding our expense reports. Sometimes we shoot ourselves in the foot with friendly fire and the press is quick to point that out to sell newspapers."