BITING THE HAND THAT FEEDS 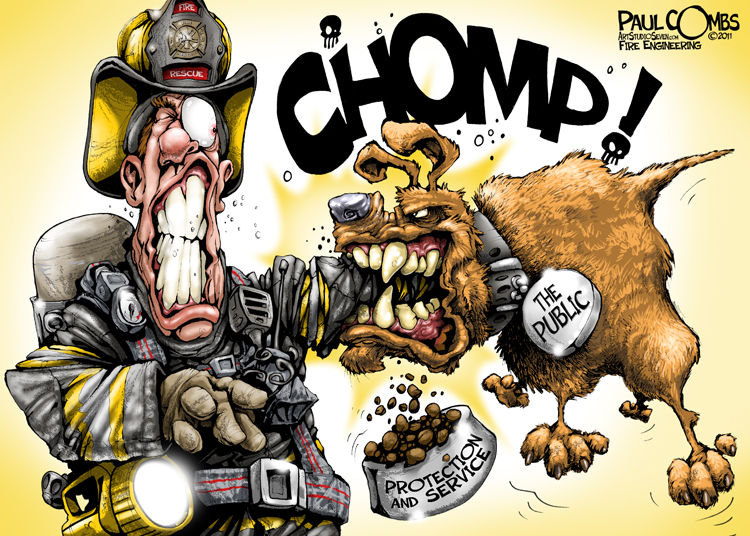 When I was a kid, I would see a fireman and instantly see a person of authority and respect. Not being raised in a fire service family, that respect came from their uniform and job - not to mention that BIG red truck! As a matter of fact, when I was four, our home burned one winter evening and I remember a fireman coming over to console my parents and even tie my shoe so my mother wouldn't have to take the blanket off her shoulders (talk about service!). Later, while driving as a teen, I would slow down when confronting a chief's car because I just knew they could somehow give me a speeding ticket. Firemen were an authority figure to be respected and obeyed.

Twenty five years later, sixteen of which in the fire service, I see a much different and malevolent attitude in society. We have somehow become a tax burden, a target for ill-will and a symbol of animosity. Even our calling card, the BIG red truck, has become a road-way nuisance!

The idea for this cartoon came while driving back to the firehouse from a recent MVA. The patients were surly and uncooperative, traffic was unyielding, by-standers were disrespectful, and worse yet, my brothers on the Engine saw this as typical public behavior. Irreverence has become the norm! So, the metaphor of the dog biting the hand that feeds was an easy association, and one that I think fits the public's attitude and perception perfectly.

I don't need public adoration and hugs to feel important, but a little respect and cooperation would be very welcome. In the end, I would still take time to tie a child's shoe, I just hope I don't get kicked in the face while doing it!

To see more of my work, visit: www.artstudioseven.com

Here's a link to a story from my area - this is exactly the kind of stuff I'm talking about!!

Paul, very nice as always Bro! Since I have gotten back, I have tried to be a glass half full kind of boss, difficult as the public, politicians, and own Brothers make it at times. Works sometimes other times not so much. Last night was a prime example of working properly. I took what proved to be an EMS call on the private line.after the problem was explained to me, my company took in the run. Enroute I explained the situation and why we were going to and not only did the guys, one of whom is a probie, understand, but the folks couldn't say enough about our response. This wasn't my normal shift, so it could have gone boom in my face. Just an example of things going right Brother! Again outstanding piece, regardless, we as leaders need to move forward not back. I'll never change everything, but I won't stop trying either.

Comment by Robert J. Bures on July 27, 2011 at 11:42am
We accept that in the Fire Service, someones' failure to plan becomes our emergency.  We do the best, under difficult, dangerous and untenable conditions, to preserve our lives, their lives and their property.  And yes, most are respectful of our Duty and Mission.  There are those, though, that only love us as long as they don't have to slow down, pull over, stop, turn down the music or otherwise be inconvenienced.  We can and should try to educate as many as we can, but there will always be a few beyond redemption.

My son added a decal to his truck not long after he joined the department:

I VOLUNTEER TO SAVE YOUR BUTT, NOT KISS IT!

Sometimes, I think that kinda says it all.

Paul, as always nice job!  Times have definitely changed which I feel has impacted our service in many ways. In my opinion the public perception has changed because of the internet. Today if a fire service member makes a bad decision it no longer stays local. Within hours, a local had mistake, error, bad decision etc is spread across the internet in articles, blogs, pictures videos etc. Then the court of public opinion jumps on it, you know the court of "brother and sister firefighters" who just want to Monday morning quarterback and point fingers. Instead of identifying the issue and learning from it. Now that black eye to a small department becomes a black eye to the entire fire service. We must all learn and understand how a mistake in a department effects every department.

Comment by Nick Morgan on July 26, 2011 at 10:47am
Good post Paul!   The media and many politicians are doing everything they can to turn public opinion against us.  Fortunately in the nighborhoods I respond in there's still a segment of society that appreciates us, but we're still experiencing a growing sense of disrespect and antagonism from the general public and it is contributing to low morale among the troops.

Paul how true this is , times have changed , the compliants and just being rude is the norm today, I have dealt with this on several occasions and believe me , you try to be  the one that is calm and cool when they attack you.

recentley we were called to a open burn and upon my arrival i had to call for police , the resident was intoxicated and was attcking my Asst. Chief , calling him names , this is a taxpayer who knew the law yet broke and all we tryed to was the job asked of us. It's a sad world we live in today.