Many Died For Your Three Day Weekend 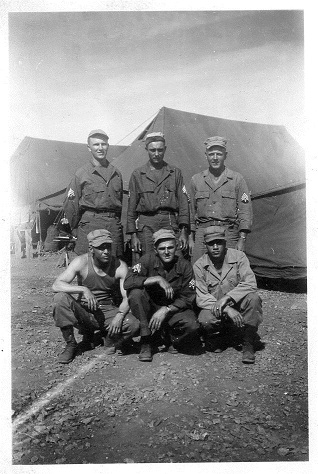 Blogger Note: My dad, Staff Sgt. Walter (Gotch) Goodrich is standing in the middle of the back row.

I must admit that I have been a selfish pig when it comes to Memorial Day weekend. I have been so consumed by HOW I was going to spend it that I forgot the REASON. Did you?

When I was a young boy, I was in the Cub Scouts. Every year on the Saturday that preceded Memorial Day, we were tasked with placing the small flags on the graves of the military veterans at our community’s cemetery. We didn’t want to miss anyone. It was breath-taking to see, once it was done.

The reason that we placed a flag on every veteran’s grave is because we didn’t know who had or hadn’t died while serving our country.

After all: Memorial Day is a day of remembrance for those who have died in our nation’s service. Formerly, it had been called Decoration Day, because the graves of soldiers who had died in service to our country were decorated to honor them.

According to www.usmemorialday.org, Memorial Day was officially proclaimed on May 5, 1868 by General John Logan, national commander of the Grand Army of the Republic. It was first observed on May 30, 1868. Flowers were placed on the graves of Union and Confederate soldiers at Arlington National Cemetery.

So, in the beginning, Memorial Day was to honor those who fought and died in the Civil War. Sometime after World War I, the observance was changed to honor Americans who died fighting in any war.

Memorial Day is now recognized in almost every state-though I don’t know which state (s) doesn’t (I’m guessing Georgia)-on the last Monday in May (National Holiday Act of 1971; P.L. 90-363) and established the “three-day weekend” for federal employees. As you can see, the “official” date of Memorial Day is May 30, but the observance day is the last Monday in May. So, in 2012, it will fall on May 28; in 2013, it will be on May 27 and so forth.

There are many who would like to see us go back to observing Memorial Day on May 30th because the meaning of the day has been lost on planning for the long weekend. Think about it; are we thinking about the sacrifices of our soldiers over the years as the cars whip around the track at the Indy 500 or the Coca Cola 600? Are we so worried about the menu for our cook-out that we forget our fallen soldiers on the one day that we are supposed to remember?

Forgive me, but I am old school and somewhat a traditionalist. It seems like we aspire to be an all-inclusive society and having suffered from the trauma of not being picked when sides were chosen on the playground, I can understand to a point.

I am not going to tell anyone how they should feel or how they should observe Memorial Day. See; I can’t even refer to it as a “holiday”, because I don’t believe that having a moment of silence or flying flags at half-staff on a day of remembrance is a “holiday”.

If you want to participate in a traditional observance of Memorial Day, then you will want to recognize the red poppy as a symbol of that day, observe a moment of silence at 3:00 pm and fly the American flag at half-staff from dusk to noon. You can fill the rest of the day with however you see fit.

We can choose from an array of other “holidays” to lengthen our weekend. And honestly; there are other days in a calendar year to recognize ALL military personnel who serve. I won’t argue that we shouldn’t honor them, but the focus should be on the American soldiers who died fighting to defend freedom. Let’s get back to honoring those who gave the ultimate sacrifice in service to their country.

My father was a veteran of both the European and Pacific theaters of World War II. My mother was the dutiful World War II bride and mother to three small children at the time. Both survived the war, but are no longer here. I will visit their grave and most likely, I will read from Dad’s military-issued Bible; maybe something from the Book of John or Psalms.

And I will think of Johnny Kellett, who rode with us to school while growing up, but who died in Vietnam. He looked just like a young Sal Mineo. I can still see Johnny’s face. Johnny had a habit of slamming the car door very hard when he got out and whenever one of us kids would slam the car door too hard, Dad would say “Why don’t you slam the door there, Johnny?” Yeah; you don’t forget things like that.

One of my favorite poems is one by Kelly Strong that is entitled “Freedom Is Not Free”. It reads:

I watched the flag pass by one day.

It fluttered in the breeze.

A young Marine saluted it,

And then he stood at ease.

I looked at him in uniform

So young, so tall, so proud,

He’d stand out in any crowd.

Had fallen through the years.

How many died on foreign soil?

How many mothers’ tears?

How many pilots’ planes shot down?

How many died at sea?

How many foxholes were soldiers’ graves?

I heard the sound of TAPS one night,

When everything was still

I listened to the bugler play

And felt a sudden chill.

I wondered just how many times

That TAPS had meant “Amen,”

When a flag had draped a coffin

Of a brother or a friend.

I thought of all the children,

Of the mothers and the wives,

Of fathers, sons and husbands

I thought about a graveyard

At the bottom of the sea

Of unmarked graves in Arlington.

And never more loudly than on this Memorial Day.

The opinions and views expressed are those of the article’s author, Art Goodrich, who also writes as ChiefReason. They do not reflect the opinions and views of www.fireengineering.com, Fire Engineering Magazine, PennWell Corporation or his dog, Chopper. This article is protected by federal copyright laws and cannot be re-produced in any form.

I hope to pass my traditions on to my son.

I am going to have a shadow box with my dad's stuff in it and will give it to my son on his next birthday.

Comment by Baily M. France on May 29, 2011 at 6:53pm
Today before i left to leave for tech School , my father and my younger brother went visit my Grandfathers Grave to place a flag to honor honor him.this has been our Tradition, since his passing. Comment by Mike France on May 27, 2011 at 7:03pm
Art , very well said and the Scouts still place flags on the Graves of our Veterans, and take them down. Have a safe one.

And I was taken by your tone of respect and now that we have established it, you can call me Art and I will call you Baily, if you don't mind.

You have a good dad.

I will, guess just coming out of Boot , i still used to calling everyone sir, My father taught me to be respectful.