We recently had a trauma surgeon present a EMS continuing education lecture for our department. Part of her lecture was in regards to current trends in trauma science and the use of the Damage Control concepts. Initially I was not very interested in the lecture, that is until she used the term "Ominous Triad of Death". How cool is that, you throw down "Ominous Triad of Death" in any room and you get attention. Is that a biker gang? A game with a revolver and one bullet, or some new reality show? Whatever it is I have to hear more.


For trauma patients the Ominous Triad of Death is described as the development of the "vicious cycle" of hypothermia, coagulopathy, and acidosis. When these three symptoms present together in a pt. the compounding effects with nearly 100% success lead to death. Not quite the shock and awe that we were after however still dramatic and the impact made the term stick. My mind started wondering once again as her lecture continued on.

In the past few weeks I have had the good fortune of trading some emails and phone calls with Christopher Brennan of Fire Service Warrior and author of The Combat Position. I have enjoyed how he is presenting a total preparation concept for firefighters that addresses mind, body and skill and I have been picking his brain on how he sees total preparation going forward. After every talk the concept of addressing mind, body and skill at all training events and activities seems to ring more true.

The total preparation concept is true in theory and in function. We should never isolate our mind, body or skills. Our work environment is extremely dynamic which requires continuous observation, interpretation and action. We are not assembly line workers where we are skill driven from punch in to punch out. Despite the perception at the kitchen table we are not philosophers who are paid purely for our opinions. We are much more complex because the duties, situations and demands of our profession are so unpredictable. This also applies to our machines (the body). 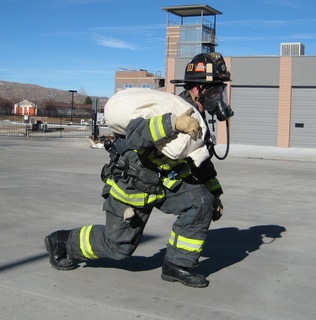 We do not act in isolation of muscle groups. Our tasks are functional and fluid. We pick up and move, we crawl and sweep, we reach and pull. The need for total preparation is dictated by the clear demands for total action under stress in uncontrolled environments.

I am pretty sure you wont find these listed as as formal "Key Contributing Factors" on injury or line of duty deaths but I can almost guarantee that they were present in the line of dominoes that lead up to it. The Ominous Triad of Death for the American Fire Service is Complacency, Fatigue and Mistakes. You may be able to sustain for some time with one or even two of these present but when they all arrive in one of your firefighters, a company or even worse a department the countdown begins. Complacency is the lack of mental preparation or activity. Fatigue is the result of poor conditioning, and mistakes come when we are not competent or confident in our skills.

It is time that we start to approach training programs with a Mind - Body - Skill approach. Total preparation is the training model for a better and safer American Fire Service and the prevention of our Ominous Triad Of Death. I have a feeling you will be seeing much more from The Fire Service Warrior in the coming months. Until then start planning your trainings and you day with total preparation as the template and pick up The Combat Position: Achieving Firefighter Readiness .