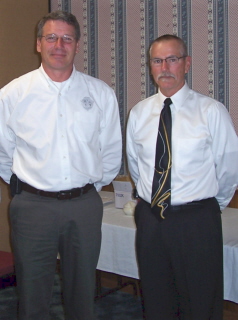 Note: Chief Mark Wessel of Keokuk, IA Fire Department is to the left. I am to the right.

December, 1999 delivered a major blow to our brotherhood of firefighters.

At the time, little information was getting out on the Worcester Cold Storage Warehouse fire, but I had friends near there who were conveying bits and pieces of information to me.

Then, I received the news on the fire in Keokuk, IA that claimed the lives of Assistant Chief Dave McNally, Firefighter Nathan Tuck and Firefighter Jason Bitting as they attempted the rescue of three, small children, who also perished in the fire.

The headline in the Thursday, December 23, 1999 edition of The Hawkeye newspaper read: “They Gave the Ultimate”.

As I sat in the balcony of the high school and listened to the chief deliver not one, but THREE eulogies, I was taken by the clarity and force of his words and to marvel at his enormous, inner strength.

The families, including young children, sat directly in front of Chief Wessel standing at the podium; standing as if he were being judged by an entire community of citizens, friends, firefighters and God Himself.

From my interview with Chief Wessel, he states: “To be honest, I remember being mostly numb. I felt so humbled and responsible that all I could think about was the fact that no matter what words were said, they were not adequate. The entire ordeal was so far above my ability to comprehend, I just existed through the service. Fortunately, there were so many people that assisted myself and the Department, so that things ran smoothly. I will never be able to express my gratitude enough to all those people”.

After we left the memorial service, we felt compelled to go to the house of the fatal fire.

There were several like-minded firefighters from the services there walking around, standing, staring and speaking softly to each other. I guess that we were all there trying to make some sense of this tragedy.

I remember looking at that house and thinking to myself of how evil it looked and since then, I have had dreams about it. It stood out of place amongst the houses that were decorated for Christmas. Where other yards were blanketed with white snow, this house where six had died had a yard littered with burnt debris and black soot.

For the next two hours as we drove home, we talked about what we had seen at the memorial and at the house.

It was at the Tazewell County Fire School in East Peoria, IL. Mark’s class was “The Disaster Has Become Personal”. I got to speak with him during breaks, which allowed me to learn more about this extraordinary person.

In September of 2004, I got to see Mark once again, when he spoke to a large group of firefighters in New Windsor, IL.

By then, I was blogging on a regular basis and had done some interviews, so I contacted the chief about giving me an interview that would be published at the IACOJ website. Since the interview appeared, I have had many requests for copies of it.

The interview went into great detail about the day that he lost his best friend/his assistant chief Dave McNally and two, rising stars in the Keokuk Fire Department-Nathan Tuck and Jason Bitting.

It was a very powerful piece and a very emotional experience for me; one that I will never forget.

In 2008, a local church wanted to honor area fire, EMS and police with a dinner banquet and they asked me if I knew of a speaker. It was a no-brainer. I gave them Chief Wessel’s contact information and to my delight, he accepted the invitation to speak.

I got to spend a lot of time with Mark before and after the banquet. I am so proud and honored to know him.

And though I think about Mark often, I especially do so at this time of the year, because I know that his thoughts are of those sad days in December of 1999.

I also know that those close to the Worcester Cold Storage Warehouse fire have heavy hearts, too.

That is my point.

I want us to temper this “joyous holiday season” with a moment of reflection for those that we have lost.

That is my Christmas wish.

To those who have suffered a loss, please know that you are in our thoughts and prayers.

To the rest of you; count your blessings.

On Dec. 18th Kansas City,Mo. lost B.C. John Tvedten in a warehouse fire. Were had just laid John in his final resting place when we heard about Keokuk. I remember.

And the thing with Chief Wessel is that he is more than willing to take on and answer the tough questions and allow you to learn from his experiences.

He is the reality check for those who believe that it can't happen to them or their department.

We hear so much TODAY about understaffing/manpower issues.

Mark was already fighting a mayor in 19999 about this very subject and staffing was a major contributing factor when the NIOSH report came out.

By the way; Mark is still chief, but the mayor at the time was defeated.

And I believe that Asst. Chief Dave McNally's son became a firefighter for Keokuk.

What better way to honor a father's memory.

Chief, 1999 was a very tough year for multiple line of duty deaths, and your comments about Chief Wessel are very well put. I heard hte chief speak once and it was good to hear about an event from someone who was there. He was very honest about what he was thinking, what he saw and how things turned out. I hope our profession starts asking more questions and learning more from those who were there, it is the best way to learn from the experiences of other.