Where does the 1st line go? 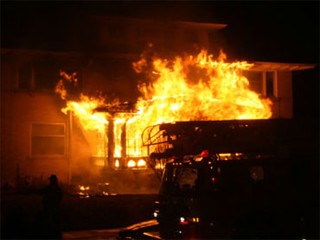 The photo attached is from a fire at a multi-unit conversion with 7 seperate units. Upon arrival @ 0230 hours the entire front porch was involved with fire and the front door had been left open by occupants trying to flee. Reports were of possible victims still inside. Where does the first line go and the fire attack begin?

Permalink Reply by William Anderson on July 18, 2008 at 5:48pm
With a large volume of fire showing on arrival to me it would make sense to put in place a large caliber hose line and begin knocking down the main body of fire visible. Its visible, you can see it and hit it, usually when we start putting fire out our problems start to diminish if not disappear. Trapped occupants presents an additional hazard, looking at the building and seeing what may or may not be the main path of ingress and egress will give you a clue as to where occupants may be in the structure. Attacking from the unburned portion on this structure may not be a feasible option due to building modifications and the layout of the rest of the property, just put the fire out. Its difficult to try to armchair quarterback something like this from one picture, but thats my take on this picture.

I've seen this burned to unnburned practice fail too many times. Go to where the fire is. Use the front door. Get to where the fire is. Pushing fire, in my opinion is the lesser of two evils, the other being a delay. Heck there's already been a delay, one that's not your fault; the time it took for discovery, the call for help, the dispatch, and the travel time to get there. Why allow any more delay? Yes; you will push fire some - minimize it by using as straight of a stream as you can. Once you've knocked down enough fire around the point you're going to enter, and you've made entry proper, it isn't any different than if you'd come in from the back, minus the delay. Here are some real life examples of what can go wrong:

The first due engine with a fire at the front of what looked like a single family home went to the back door with the intention of pushing back to front. The home had been modified, creating an in-law apartment that had it's entry at the rear. There was no passage through, short of breaching the wall. The second due of course, followed the first, creating quite a delay as those lines had to be repositioned to the front.

An attempted entry, rear to front of a single family with fire at the front ran into a fox lock on the rear door which was also blocked from the outside by a (big) pile of tires.

At a single family, the on scene resident told the first due the fire was in the rear bedroom, and sure enough it was, as well as a fence, and a large pile of demolition debris which had to be navigated. There was a running garden hose lying in front of the window indicating a delay in notifying while the owner tried to fight the fire. The rear door had a washer and dryer pushed against it in a narrow hallway. The second due found the front door unlocked and were putting water on the fire while the first due was still trying to make entry through the rear. Burglars like back doors, which is why homeowners tend to fortify them.

The decision was made to work rear to front on a fire in a two family upper-lower where the fire was in the front of the upper level. The resident didn't use the rear door and had put a refrigerator in front of the door to keep burglars out. He was found at the front door. He would have been found immediately if the first due had gone that way. Ironically, he might have made it out by himself if he hadn't blocked his own route out the back.

I'm not saying working burned to unburned doesn't work, but it is fraught with all kinds of possibilities for creating a delay in the main objectives - Locate confine extinguish. TJP