I am a huge history buff, and am intrigued by ours as a whole. I have one main point of intrest that frankly im not even sure where to look. Horses of the fire service. stories of and such.. I love listening to stories from older members whos fathers have told them of old retired fire horses breaking free from carts at market or fences in pastures to join their "family" at the scene. Horses wich were out of the fire service for years. They also told me of how the horses were able to smell the smoke and usualy didnt even need to be steered to the call. Stories of this absolutly intrigue me. Thes forgoten heroes of the fire service even brought us our most significant icon, the delmation wich was a fantastic friend and guard of these wonderfull creatures. 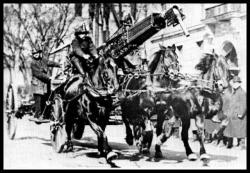 If any one has any or knows were to find some stories I would be vary greatfull. Thank you and stay safe....

Permalink Reply by Jim Maloney on March 26, 2009 at 8:53pm
I am a Firefighter in a small career department in a college town in Upstate NY. Our "Old Timer" stories include stories of retired fire service horses. When Fire service horses were "retired" they we often donated to or purchased by the milk or coal delivery companies. For fun the on duty firefighters would set off the siren as one of the retire-ees would come by on its route, to watch the horse bolt, wagon and all on its "fire" run.

Permalink Reply by Shawn Tibbitts on March 26, 2009 at 9:23pm
Thats funny. thanks for the story

I am a Firefighter in a small career department in a college town in Upstate NY. Our "Old Timer" stories include stories of retired fire service horses. When Fire service horses were "retired" they we often donated to or purchased by the milk or coal delivery companies. For fun the on duty firefighters would set off the siren as one of the retire-ees would come by on its route, to watch the horse bolt, wagon and all on its "fire" run.

Permalink Reply by Brandon Pickler on July 7, 2009 at 9:49am
My Dept has a web page with some history on it if you want to look at that. Its http://www.wichita.gov/CityOffices/Fire/History/

Permalink Reply by Brian Rowe on July 8, 2009 at 9:59am
I personally do not have any stories I can share with you, but if you ever find yourself in Charleston SC, make sure you pay a visit to CFD "Central Station" @ Meeting & Wentworth Streets. It is a very old house and is historically significant to the days of horse drawn wagons. They have quite a bit of antique equipment on display as well as the "ruts" in the bay floors - which I have been told were in place to give the horses more traction. All of the brothers at that station will give you a fantastic tour of their home!

Shawn, matbe you've heard this, maybe there is even some validating proof of it, (something I'd like to see) but anyway, as told to me by a really old timer, who ran with the horses in his day. This was when I first came on the job 30 years ago, and he had been retired 30 years or so by that time. Anyway, here goes: He told me two things: one was that you never see a straight run stair leading to the second floor of a firehouse, because the horses were so attached to the ff's that they would get bored, or lonely or maybe hungry and would go up the stairs to the dorms where the ff's were sleeping. Now, to my experience there's never a straight run stair because they take up too much room. This old timer told me the horses wouldn't climb a stair with a turn in it. Well, I have my doubts about whether a horse would climb a stair or not, but it seems like it would be possible, and if a horse was so inclined, why wouldn't he also be able to turn the corner? I have seen old fire stations with straight run stairs, which brings me to the old fellas second point: Two - the bottom of the stair will always have a door on it which opens outward, and this was to defeat the horses who were inclined to climb the stairs. Now, there could be a multitude of reasons to have a door at the bottom of the stairs, but now that I think about it, I never saw a stair in the old firehouses that didn't have a door at the bottom of the stairs, and they all opened out, at that. Take that for whatever it's worth. If you ever find any documentation that supports this old timers claim, please let me know. You know, even the old timers could be such kidders.

As a by the way, the late Hamilton J. White, who was a driving force in the Syracuse, NY Fire Department in the mid 1800s and was also somewhat of a philanthropist and inventor, was supposed to be the inventor of the automatic drop down harnesses for the Fire Horses, which was tied into the telegraph bell and would automatically drop into place when an alarm was received. He also apparently put a lot of stock into automation, because he tied numerous other things into the alarm bell, including trip lights that came on when the bell hit and automatic spring locks for the barn doors, and even a weighted pulley system that ripped the blankets off the sleeping firemen when the bell hit. (That last one might not have been so popular) Yours truly Tim Patrick