With the recent snowstorm that has blanketed much of the country, the fire service needs to take a look up before we commit to an interior or exterior fire operation. The type of structural materials, design and condition all play a big part on whether that snow loaded roof is going to be a problem. I recently took a few minutes to travel around the area to assess any potential snow hazards I could find. I was surprised to see that more than three quarters of the dwellings in the area had heavily loaded snow hazards. 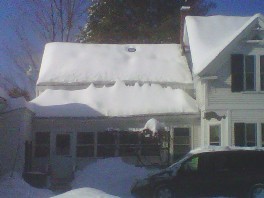 When we arrive at a dwelling fire during the winter months, the snow load should be considered when the incident commander determines his or her strategic plan. Some properties given their condition may have a potential for roof collapse even before the fire started. Considering that the structural support system may be directly or indirectly attacked by fire, this can add to the potential early onset of a building collapse. Another consideration should be with newer constructed dwellings; that were designed with lightweight truss-roof systems. As seen in many past fire load tests, a lightweight truss roof system once assaulted by fire fails at an alarming rate. None of those fire tests to my knowledge were conducted with a snow load as seen in the photos accompanying this article. 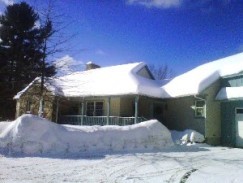 Roof Considerations: Heat loss from a building may result in some snow reduction through the melting process between storm events. Roofs that were designed to allow heat loss to melt snow are called Warm Roofs. This can be seen by engineered design or by the lack of proper insulation. Other roof systems remove lost heat before it has a chance to melt the snow through venting the ridge or gable. These roofs that prevent heat from reaching the snow are known as Cold Roofs. Sometimes buildings are either unheated during winter months and/or are intentionally kept at or below freezing, so there is no heat loss that results in snow melt or ice build-up.

One factor that needs to be considered by incident command is how does the FD safely commit to an interior firefight while considering the level of danger? What are the dangers to be considered? Well it is not as easy as what you see from the street. Understanding building construction has never been more important when you add-in snow loads. Do you expect normal tasks like fire suppression and search/rescue to be done quickly when firefighters encounter delayed ventilation? Interior companies will certainly encounter an under-ventilated fire condition. Interior conditions will not be the same as operating during the spring, summer or fall months. Ladder companies will certainly have a delay in providing vertical ventilation due to lack of access to the roof, snowbanks that limit truck access, how about carrying a ground ladder in deep snow which is difficult at best and access to the physical roof surface which can be buried 18-36 inches below the top of the snow. Adding firefighters to a potentially overloaded roof can trigger collapse as well. Not too often do we ask the truck company to bring a snow shovel with them to just find the roof’s surface. Attempting to stay on the aerial to get the job done safely? Well good luck trying to shovel from there. These delays will definitely change the interior company’s exposure to extreme heat build-up and unique fire dynamics. 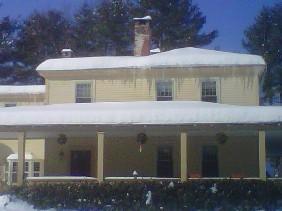 Every firefighter on the fire ground from the Fire Chief right down to the newest firefighter need to stay alert to signs of overhead hazards during the winter month operations. There has been a lot of focus on building collapse lately in the news but staying cognizant to potential heavy snow or ice slides that can cause serious personal injury or death to first responders. Heat from the fire building can trigger a layer of water to form on the roof, for which can allow the entire snow load to slide violently. This type of overhead safety assessment must be done on arrival and continued to be monitored throughout the incident.

For you (IC) incident commanders, this is an excellent point to add to your (SO) safety officer’s checklist. We all need to also alert for any signs of a building weakened by the fire and/or pre-fire snow loading. Having someone listening for strange noises of the building settling under the unusual load and fire conditions, noting any visual signs of sagging roof eaves or leaning / bowing / separating wall connections, interior wall board cracking or noting water seeping from above are all positive indicators of a potential collapse is pending. The RIT company could easily keep this in mind as they take a lap around the dwelling every time dispatch reminds command it is time for a PAR. 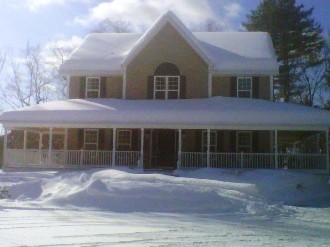 If you choose to go interior and aggressively mitigate from underneath, I highly recommend using an expanded command team approach to managing an incident by assigning an Interior Safety Officer. This person could assess these specific hazards from the inside. As we all know, our initial interior companies are often taxed beyond their ability or control and may miss some of these potentially lifesaving signs of impending danger. Bottom line is the fire service should use a strong risk verse gain decision making model with potentially overloaded roof systems and chose the appropriate model that gets the job done as safely as possibly.

William Greenwood is a 28-year veteran of the fire service serving as a volunteer, on-call and career firefighter. Billy is a seasoned fire service instructor that travels throughout the United States. He owns a training company called FETC Services. FETC specializes in delivering advanced level firefighter training and leadership programs.