Ownership vs. The Virtual Tour 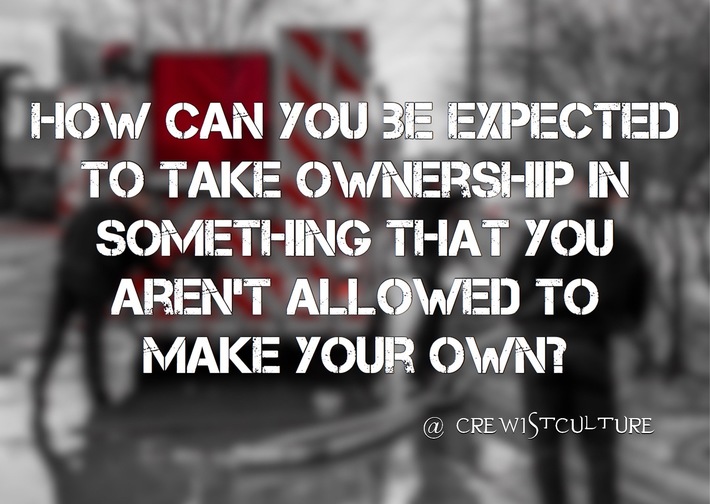 In the fire service, like any business today, Chief’s/Administration expect their firefighters and officers to take ownership and have pride in the department that they work for. And why shouldn’t they, having pride and taking ownership of where you work and what you do should be a very basic element of a successful team in any field or trade. The problem is what are the firefighters and officers given to take ownership of? How can I take ownership and really be proud of something that I am not allowed to make my own? To me it seems like we have just been given the fire service virtual tour. Here are some very basic things that you need to be a firefighter at this department; you can look at them and use them when we say so according to our policies but you can’t physically make them your own according to your personality. Here is your characterless red fire truck that looks like all the other fire trucks at this department, here is your characterless gear that looks like everyone else’s on the department, and here is your characterless workout room that has the same equipment that all the other stations have including 40% of it that no ones used in 15 years. For those of us that have been in the home buying market in the recent past you have probably seen some virtual tours. They are a cool tool to use when figuring out which homes are good options or not without having to drive around looking at all of them. However, while you’re looking at these virtual tours you can’t help but think about all the different options that you would want to do to each perspective space to make it yours and make it fit your style. So now imagine if you were stuck in a that virtual tour forever, you have all these great ideas of what you can do to be more proud of your home but you are not allowed to change anything and stuck with the characterless environment that you were given.

Chances are that in your department no matter where that is that there are firefighters that are severely out of shape and maybe even to the point of being obese. What is so sad and infuriating at the same time is that most fire service administrations turn their head to this issue but if you want to personalize your helmet with some firefighter sticker voicing a passion of yours… HELL NO! “That isn’t allowed per policy” is all the reasoning we get but what is really being said is that I can’t trust my people to make decent choices and not put something stupid on there. To make things worse is that we get the lip service of them wanting us to have pride but really when it comes down to it, a firefighter that has pride or a crew that has pride is harder to control and intimidating to people who use positional power to manage their people. If you as an officer or even an informal leader sees someone put something inappropriate on a helmet or fire truck, it’s your job to say no that’s not appropriate and it needs to be taken off. If you don’t do that and you allow it then you are the problem. Maybe we should focus on dealing with that problem instead of punishing an entire department like the fire service is so great at doing. DO YOUR JOB!!! If you are a formal leader of 100 people then lead those 100 people, set expectations and ground rules for those 100 people, and hold the 101 people (adding yourself to it) accountable for those rules and expectations. If you lead 2 people, then the exact same rules apply and everywhere in between. I am constantly amaze at how good we have become at treating grown men and women like kids. Let your team members do what they are there to do and trust that they will do it because if they can’t then that’s on you.

Obviously there needs to be ground rules, I would be disappointed and irritated with one of my firefighters if they put something inappropriate on their helmet and it would be addressed right then and there. Are we as station officers so inept at our job that we can’t be trusted to police our own stations even to the point of that? And like I said, if there is an officer who allows inappropriate things then they need to be dealt with by their supervisor because to me that’s even worse than the firefighter who does the inappropriate act. I think it is safe to say that those hard-working officers who take pride in their jobs and their crews deserve some credit and some leeway. Especially when we’re talking about something as little and insignificant to the big picture as helmet stickers.

Now I know that this may not be a problem where you work, maybe you’re free to cover your entire helmet and truck with whatever you want but I think taking a step back most would agree that there are some type of similar issues going on. Maybe crews have asked for duty shirts that have their own station patch on them, engines that have a station or district motto on them, or just doing some small things around the station to give it some character and not look like a dang white walled asylum. As officers, we are put in roles because (hopefully) we are capable of leading, making good decisions, and holding our teams accountable. If that truly is the case, then it’s time to start showing it not just saying it. If you want a crew, a team, a department or whatever to take ownership then you better start handing out some keys to what you want them to own and allow for them personalize their little piece of the department which will of course allow them to have much more pride in where they are at.