When I was a kid growing up the Iowa Hawkeye Wrestling Team was the STANDARD! They won multiple National Championships as a team and individuals. The “Iowa” style of wrestling was prevalent and taught. The emphasis was on toughness, conditioning, and BASICS and that created and ideal mindset of being able to accomplish anything put in front of you. 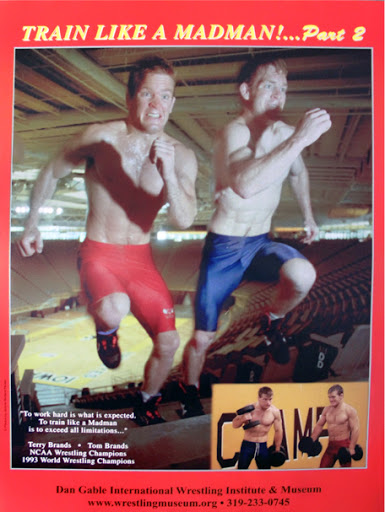 That picture and their subsequent results was a source of inspiration for me for a very long time. I thought this is what a wrestler looks like. I was dead wrong and it took me a long time to see that its not a look, its not a certain body type, height, or anything it was all about ACTION!

Fast forward to the fire service, the first time I went to the volunteer fire house I was hooked! The idea of continuing to wrestle and purse it in college was done I had found my calling and my passion and I knew it. However, I made some of the same mistakes. I saw some people who “looked the part” and I though THAT’S WHAT A FIREMAN LOOKS LIKE! Again, I was dead wrong it was all about action.

The quote at the beginning is from Tom Brands and it is a small line from a FLOWrestling documentary about the Iowa Wrestling program now under the leadership of the Brands Brothers. When I was watching it and he uttered those words it hit me like a bolt of lightning! He went on to describe how he had 2 wrestlers that were very different in their approach, body type etc. One concentrated on lifting the other more on technique…..they are not from the same mold but the STANDARD of hard work, aggression, toughness, etc. was the same!

This is where the fire service comes in….there is no MOLD for being a fireman, but there is a STANDARD!

I will go even further to say I do not know what a fireman looks like, but I do know how they ACT!

This standard can not and should not be violated for any reason, the stakes are far to high to allow someone who looks the part or even has a decent resume to infiltrate our ranks and violate the standard that has been set not by the fire service but by the demand and expectations of the people we serve.

This standard has moral, ethical, and physical portions that we must enforce at all costs.

We musk put others in front of ourselves

We must put ourselves in danger

We must be able to perform the basics of firemanship (stretching, flowing, searching, laddering, forcing)

We must constantly train and educate ourselves

We must be physically fit

Failure to uphold this standard is dereliction and violation of the contract you signed when you raised your right hand and swore you would be a fireman. It is not about attributes, background, upbringing, race, religion, athlete, non-athlete, etc. it is about simply doing what is required, upholding the standard of firemanship. Hitting a homerun in college baseball no more qualifies you to be a fireman, than me striking my kid out in the back yard qualifies me to be a pro baseball player.

It is up to us firemanship is under attack nationwide.

BREAK THE MOLD, UPHOLD THE STANDARD!

In Their Own Words: Sean F. Peck