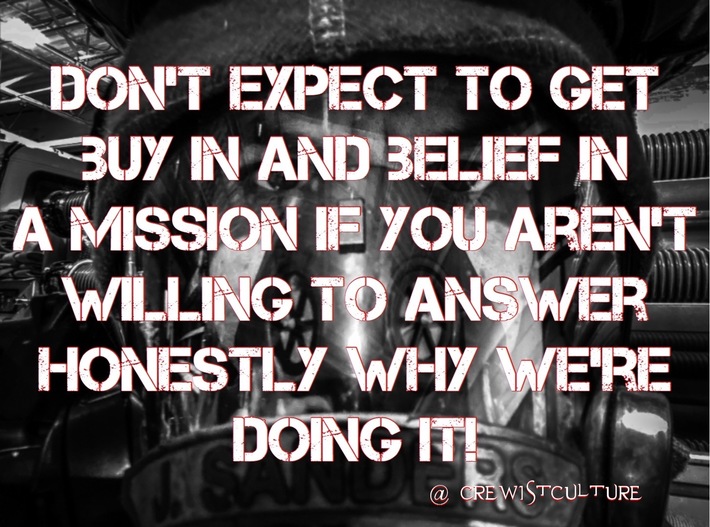 It’s Not Just Millennial’s That Want to Know

One of the most frustrating things that anyone in middle management can be faced with is to be given a mission, policy, task, etc. that they don’t believe in but then must convince their team to believe in and carry it out. As middle management when we’re faced with these types of issues it is our responsibility to ask questions until we are clear on all details, but what do we do when those above us don’t give us those details? The one factor that either makes or breaks this situation is the why.

If we have leaders above us who will take the time to honestly answer our questions and give us the why then even if we still don’t totally agree at least we then know what the end goal is and that it’s been properly thought out. However, on the other hand, if you are put in that situation and you aren’t given a why but instead you’re given dishonest answers/data to support it, or if you’re given a series of very weak excuses that holes are easily seen through then your buy in will be zero. How can we be expected to follow a plan if we have no idea of what we are truly trying to accomplish? This to me seems to be a tactic used by management that are more interested in leading sheep than leading inspired and driven team members.

Millennials have been receiving a lot of flak over their constant need to ask questions “why do we do it this way” “what is the purpose of using it like that”. Personally I have taken a step back to look at that from a different perspective because I know that every young generation entering the workforce has been despised by the generation or 2 before them that have been there a while so I don’t put a lot into all that. Looking at it differently I wanted to ask myself first who are the people that are so irritated by these questions and then why are they irritated by them.

Now that we have a little better perspective I think again, how can you not want to know the WHY? The biggest struggle that I have faced since becoming a supervisor is with being asked to support something but not getting the backing to help me to understand and believe in it first. That is a losing battle that you are putting the people below you in if you do this. Like I mentioned earlier, I don’t honestly expect to agree with everything that comes down from above. I know that they see a bigger picture than I do and that from that perspective they see things that I can’t see. All we ask as middle management is an explanation and an end goal. With that I can take it back to the team and say I know this may not sound like a good idea but here is how it was explained to me, I see where they’re coming from and I know we can make it work. It’s that easy, and now you have a team trying to accomplish the mission instead of a team that is building resentment for the leadership. Millennial’s aren’t the only ones that need and want to know why!

If you can’t explain the end goals of a mission without using “well this is just what we’re going to go with” or “this is what we’re doing because I’m in charge” then you should really go back and rethink that mission. The only thing that you will be accomplishing by taking that stance is creating an environment of rebellion and a team full of people hoping to see it fail. Do you honestly think that you can implement a plan that no one supports or believes in and intimidate them into making it a success? Leadership today requires more than a shiny badge, an official nameplate on your desk, and an authoritative voice. It requires influence, buy in, direction, and humility. And most of all, it requires a WHY!