I was standing in the parking lot of our training center shooting the breeze with a few guys when one of them said, "Hey man, you've got to see this!" He whips out his cell phone, dials up Youtube, and proceeds to show me a video of two firefighters over zealously practicing a push of a 1.75" line in a parking lot. I quickly recognize the tone of the video is more satire than instructional, basically knocking the Nozzle Forward program. In true firefighter fashion, these two guys took a fair amount of liberty with their interpretation of what Aaron actually teaches.

As the guy showing me the video starts to laugh hysterically, I asked him had he ever taken the program. He said, "hell no, those guys don't know what they are teaching about and are all about sucking money out of fire departments". True to being a firefighter, he's not about to let facts get in the way of his opinion. I guess I should back up and tell you that I have personally had to the chance to meet and learn from Aaron on several occasions starting with about 6 years ago. Like many of you, I was blown away by his passion, instructional methods, and how much buy-in he had from his cadre. Perhaps the thing that impressed me most about him was the fact that the particular weekend I attended his program he and the other instructors helping him donated all of the registration to the widow of a local fallen firefighter.

While I was annoyed that this guy was spreading something that wasn't true, it was actually the two guys in the video that bothered me more. This was wholeheartedly due to the fact that they were wearing their hoods over the faces, afraid to show who they were. Another anonymous critic, another facebook warrior, another complete and utter coward. Now I have to admit by not knowing the exact source of the video, it's entirely plausible these two guys took Aaron's class, and might actually be close friends of his. But as I recently saw Fit to Fight Fire post, friends talk s*** to your face and don't have to hide theirs while doing it. So until proven otherwise, the two guys in the video remain a perfect illustration of the ignorance that exists in the fire service.

Unfortunately, the fire service continues to struggle with the problem of cowardice from the cheap seats. For every one of us digging in, working towards understanding our craft, and leading others to the same, you still have a small group of morons up in the cheap seats drunk off their own vanity shouting obscenities at those actually playing the game. What's worse is that these fools think that in order for them to have any credibility it means that no one else can have any--so they talk s***, a lot of it, usually to people's backs. It's the universal sign of a coward. 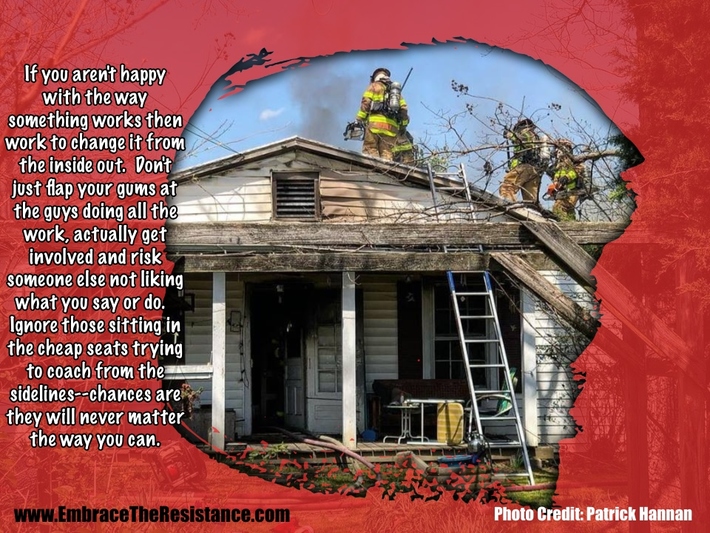 Regrettably, some people think the only way they can have credibility is if they destroy it first in others. But if you've read this far then you probably already subscribe to the idea that anyone can have credibility if they are willing to put in enough work. Your drive, curiosity, and dedication to the job help determine just how much you can have--not what someone up in the cheap seats thinks.

If you aren't happy with the way something works then work to change it from the inside out. Don't just flap your gums at the guys doing all the work, actually get involved and risk someone else not liking what you say or do. Ignore those sitting in the cheap seats trying to coach from the sidelines--chances are they will never matter the way you can.