Rope Curtain as a Down Stream safety

Water Rescue: Are you ready downstream?
By: Josh Pearcy

As spring approaches and we enter what is predicted to be one of the “wettest” years on record crews should prepare themselves for spring rain and the reality of the swift-water calls ahead of us. For most responders it is time to dust off the swift-water gear, look at known trouble spots, and preplan responses to areas in your district.

For many crews in the nation the swift-water refresher starts with the review of the throw bag. Throw bags can be a great resource. If you or someone on your crew is not familiar now is the time that you HAVE to go over it. There are several applications for their use and advantages to having them readily available. They are fast, lightweight, can be used for rescue of victims, and used for self-rescue of the responder.

Arguably the biggest drawback to relying on a throw rope as your primary means of rescue is the fact that the responder has to depend on the victim to be involved in their own rescue. Many things can interfere with the victim’s ability to grab and hold onto the rope. In 60°F water, which isn’t that cold or unusual for many areas, a victim may only have a few minutes of useful feeling in their hands to assist the first responder. After entering the water many victims become very panicked, which in itself may decrease the amount that they are able to grab ahold of the line. There are many other possible factors that can affect the victim’s ability to assist the rescuer in a successful rescue.

In this article we will look at another swift-water technique called the rope curtain. This is a technique that can be quickly deployed as a downstream safety. Advantages are that it takes very little equipment, easy to learn, and doesn’t require the victim to be involved in their own rescue. Making this an ideal technique to use as a downstream safety. The end goal of this technique is to have a tight rope secured across the waterway between two staggered objects, with a separate rope tied to produce the “curtain” that slides along the main line rescuing victims.

First step as with any downstream safety technique is that the crew needs to find a location downstream suitable to deploy the rope curtain. Here are a few things to consider when selecting a downstream location. How far downstream? Depends on water speed and length of time to access water and set up the curtain. Consider the width of the water and length of the rope. Narrow spots may work better with the available equipment, but the surface speed of the water will be much faster in a narrowing. Also, look for an object to anchor the rope curtain to on each side of the waterway and look for objects that are staggered. An ideal location for a rope curtain is downstream from the incident and just upstream from an impassable area. For example, just upstream from a waterfall, pipe culvert, large strainer, or something that you identify as the point of no return for survivability. 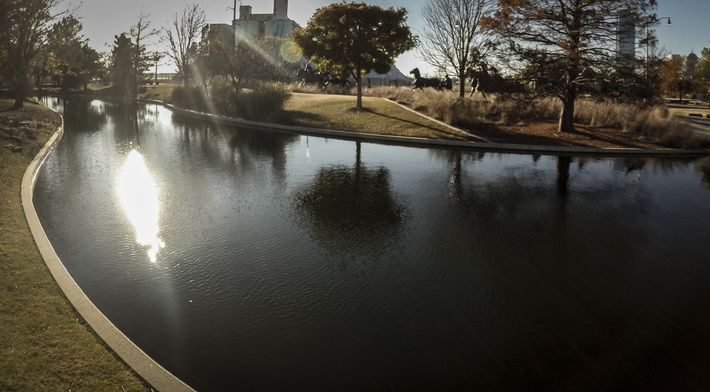 After you have found a location attach the 2 ropes to the rope from the throw bag. Then throw the bag across the water to another member of your crew that is located on the river right side. Identify one of the 2 ropes as the main line rope and the other as the curtain rope. This is why it is ideal to have 2 ropes of different color, making it much easier to avoid confusion while sitting up the rope curtain. Attach the main line around the object with a tensionless wrap to an anchor point on the river right side that will produce an angle downstream of the river left anchor point. Other side, or for this demo the river left side, makes a hasty 3:1 in the mainline and tightens the line. The mainline needs to be at least 5’ above the water when tightened. This will help prevent the victim from reaching up and grabbing the mainline and possibly putting themselves into a strainer or an entrapment scenario. 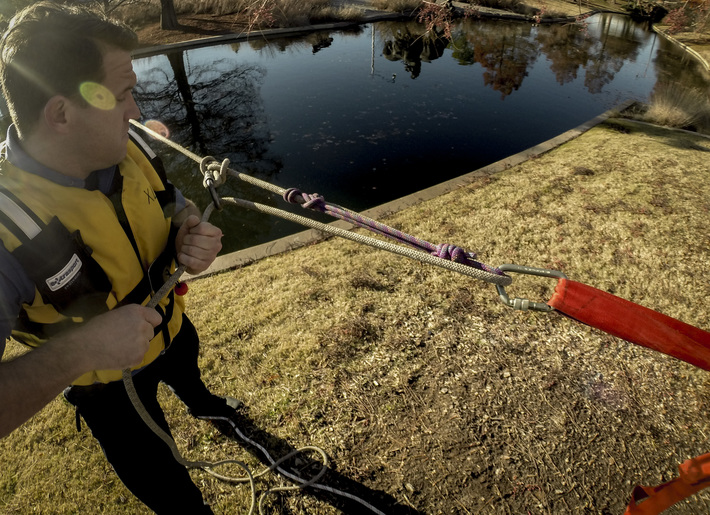 Once the line is tight, estimate the distance from the mainline to the top of the water. For this demonstration the distance is 5’. 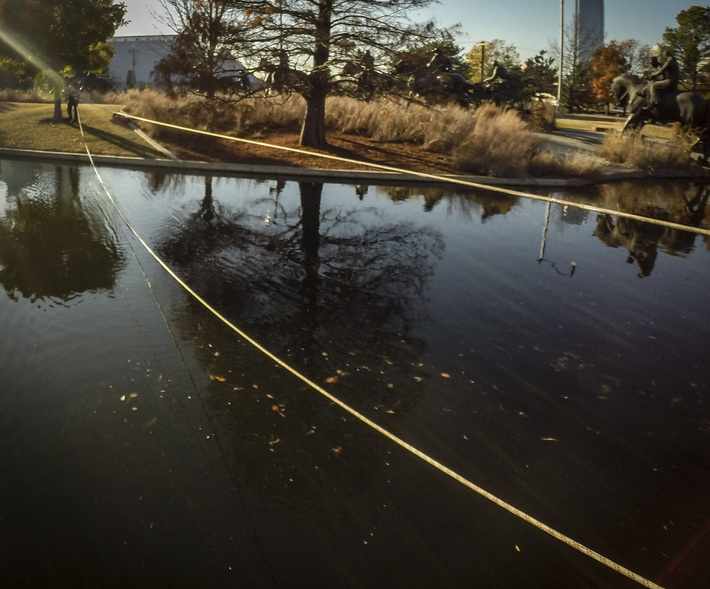 Quickly make a bight in the rope that is double the distance that you have estimated. Tie an eight on a bight, using the whole bight. For this demonstration we have a 5’ eight on a bight using 10’ of rope. Then attach the bight to the mainline using a carabineer. This will allow the curtain to slide back and forth on the mainline. After attached with the carabineer the “curtain” should touch the water. Now move a few feet down the rope and continue to tie these large eights on a bight and attaching them to the mainline. How many loops to tie will depend on the number of carabineers in the cache, the width of the water to cover, and the length of ropes available. The crewmember that is on the other side of the river and preferably downstream from your location can pull the tail of curtain to deploy the curtain all the way across the water. Ideally the curtain covers the water and leaves some additional curtain loops on the upstream side to be deployed as the curtain moves victims towards safety. As victims move downstream, they get caught by the curtain and moved to the downstream side where your other crewmember is there to assist them out of the water. If needed because of current or other water features the downstream member pulls the tail of the curtain to assist the victim in reaching the bank. As a nice bonus as 1 victim is caught in the curtain and being moved towards the bank the remaining “extra” loops are being deployed across the water. This provides complete coverage of the water the entire time and allows for multiple victims to be rescued at one time. Also, while waiting downstream for possible victims the curtain can be easily lifted up out of the water to allow for flood debris to pass by without it getting entangled in your rope curtain. Many variations to this technique are possible for different bodies of water that may exist in your district. The mainline height and length of loops are all adaptable to the area that you are responding to. Now the challenge is to go and practice. Start by walking through it and getting it figured out. Then try to work up to full speed and go against the stopwatch. Without access to moving water, crews often have to get creative and pretend that the driveway by the station is the water. Hopefully after a little practice your crew is proficient and this can be another tool in your water response toolbox.