A few weeks back, our training division was able to acquire a structure set for demolition. It was a 1960, two story, Type #2, Commercial, measuring in around 10,500 square feet. With time always equaling money, organizations are often limited to having these structures for just a few days prior to coming down. However, with this particular structure, we had the tremendous opportunity of having it at our disposal for an entire month. We utilized it to the max, performing evolutions ranging from RIT operations all the way to advancing 2 ½” hand lines. The day prior to the building coming down, my two house companies decided to take a ride over and see what was going on. Although roof operations were not part of the initial plan, the foreman granted us permission to cut the roof due to its imminent demolition. Not having the liberty of cutting flat roofs on a regular basis, we jumped at the opportunity. While it was extremely hot and uncomfortable, I’m grateful we decided to take advantage, as we would soon be exposed to a true hazard, which has a hidden presence throughout the county. 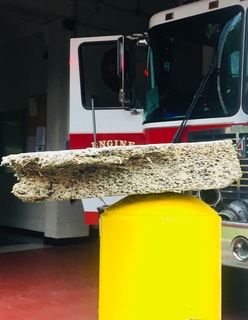 After laddering the building and getting our tools to the roof, we decided to give a swing of the flat head to see what we were dealing with. Expecting to find corrugated metal decking, we were surprised to find with only one strike the flat head went right through all layers with ease. Shocked with our ability to penetrate the roof after one swing, we investigated to find what looked like a gypsum type material. With the material being so easy to get through, we immediately recognized the enormous danger if ever operating on a roof like this under fire conditions. Wanting to learn more about the construction we proceeded to start cutting with the cutters edge, it cut like butter. As we started to cut, a substance that looked like “white saw dust” started emanating from the h***; almost identical to saw dust from a table saw. After completing our cuts with the chainsaw, we decided to step it up to the K-12 with a “wart hog blade”. If the chainsaw seemed to cut like butter, the wart hog was exponentially easier to say the least.

Never being exposed to a roof like this, upon returning to quarters I felt it necessary to do a little inquiry in order to figure out what we were cutting and the dangers associated with it. Upon researching I came upon several great articles including: Construction Concerns Bar Joist Roofs by: Gregory Havel,     Hidden Fires in Void Spaces by: Michael E. Dugan and Safety Bulletin 85: Gypsum Roof Decking via firetesttaking.com which the following was taken directly from:

Gypsum roof decking is one of many materials used to cover open web steel bar joists.

Gypsum Planks are normally 2” thick, 2’ wide, and 8’ long and are factory-laminated of two gypsum panels. Each plank weighs approximately 135 pounds.

Gypsum Concrete Roof Decking is mill formulated and composed of calcined gypsum and wood chips or shavings. It is usually poured to a 2” thickness and weighs approximately 17.5 pounds per square foot.

Gypsum plank and concrete decking is of lightweight construction, which spans large wide spaces. The main drawback, from a firefighting operational standpoint, is that this type of construction is extremely vulnerable to moisture causing a deterioration of the system.

The above characteristic, along with truss construction, is conducive to an early collapse under fire operations. Members shall not be committed to roof operations when this type of roof construction is found.

The presence of a Gypsum Roof Deck will be indicated by a white powdery residue during saw operations. Upon this observation, members shall make immediate notification to the Incident Commander and proceed to evacuate the roof. 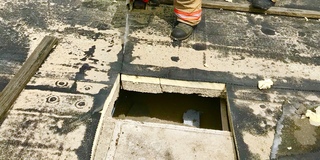 Notice the white powdery saw dust covering the roff while making the cuts.

Upon getting onto a flat roof it is imperative to make a kerf cut or a triangular inspection cut. Besides the many reasons for making this cut, it will also tell you if you are dealing with a gypsum roof due to white saw dust emanating out of the h***.

Knowing it is widely debated as to whether or not we as a fire service should be operating on flat roofs with open web steel bar joists; this was not my intention of writing this. I wrote this because two fire companies simply went out to drill on vertical ventilation and stumbled upon a real hazard. As my battalion chief enlightened me, a lot of buildings were built with this type of roof construction throughout the 1950’s – 1960’s, especially within our district. I simply wanted to share our experience and assist in making other firefighters aware of this type of construction and the extreme safety hazard.