The prevalence of cancer in firefighters has received a tremendous amount of well-deserved attention over the last couple of years. This may not be as new as it feels. As early as 1775, doctors in London linked cancer and chimney sweeps together.  Chimney sweeps had higher than population average rates of polyps in the nose and cancer of the scrotum.  Of course, this was in an era of common combustibles and before the advent of synthetic materials that are common today.

Departments are acquiring a second set of PPE for each person, conducting personal decon on the scene with towelettes and even purchasing saunas, are being discussed and implemented as means to reduce exposure to carcinogenic products during suppression operations.  Use of existing SCBA during all phases of suppression, including overhaul, will act to reduce firefighters exposure risk. These health and safety improvements can be implemented immediately and are substantiated based on numerous studies conducted by multiple organizations.

The need for SCBA during overhaul has been scientifically proven through several studies. Studies from Tualatin Valley Fire & Rescue (2011), Phoenix Fire Department (2009), Underwriters Laboratory (2010) and the Illinois Fire Service Institute (2016) have all found information on the type and dangers of toxic products that remain in a post-fire atmosphere.  Benzene, chromium, formaldehyde, and aromatic hydrocarbons are a few of the chemicals that have all been found to be present in post-fire environments in levels that exceed OSHA, NIOSH and ACGIH limits.  These chemicals are in addition to asphyxiants such as carbon monoxide, hydrogen cyanide, and hydrogen sulfide. Irritants include ammonia, hydrogen chloride, nitrogen oxides, and phenol.  Tualatin Valley found that nitrogen dioxide, acrolein, carbon monoxide, arsenic, and mercury all exceeded IDLH levels during fires studied. There is no current field monitoring system that can screen for all of these products.

UL (2010) indicated that the combination of chemicals could result in health effects from synergistic effects that are impossible to identify. Long-term chronic exposure may increase cardiovascular muscle damage.  The fire fought today could contribute to the heart attack experienced in 20 years.

Phoenix Fire Department (2009) found that CO levels had no correlation, or ability, to predict the presence or concentration of other contaminants in the atmosphere. Different chemicals were present at various concentrations at different fire levels based on factors such as temperatures reached.  This variation likely resulted from the diversity of materials that were involved in combustion. Tualatin (2011) confirmed the inability of a CO as a determinate of the presence of other toxic atmospheric chemicals. CO meters cannot measure airborne particulate. Phoenix and Tualatin findings confirm that CO levels are not indicators for any other chemical or particulate found in the atmosphere.

The Phoenix study concluded that SCBA should be utilized with CO above 150 PPM. APR’s, with the correct filters, could be considered in CO concentrations less than 150 PPM. The study also concluded that additional health-based studies would be required to confirm APR effectiveness. Given a lack of ability to determine the appropriate filter, use of SCBA would seem a more reasonable solution.

Multiple studies have identified a range of contaminants in a post-fire environment. Asphixyants, irritants, and carcinogens have been found to be present in concentration levels up to IDLH. Each of these chemicals has the potential to cause long-term harm to respiratory, cardiovascular and dermal exposures. The combined effect of multiple chemicals, at various concentrations, coupled with current individual health states is impossible to identify.

Given the range of chemicals in a post-fire environment, the inability to provide detection and concentration of each, the use of SCBA throughout all phases of suppression and overhaul are justified for increased firefighter health and safety.  Is there a justification to not wear SCBA given the numerous studies conducted and consistency of conclusions? Wearing your SCBA through overhaul is one critical step that can be implemented immediately and would demonstrate your commitment to reducing cancers and other severe health impacts. 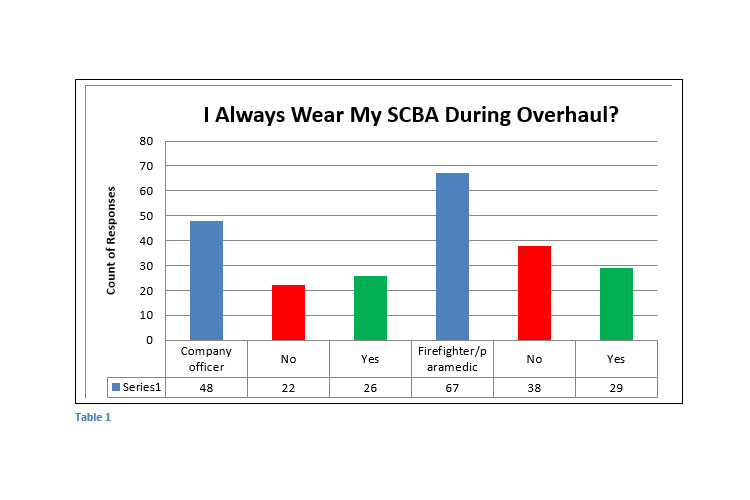 I have seen at least one study on a high rate of specific cancers in FI's that was linked to close contact. I have not reviewed and on PAPR of CBRN mask use. Would like to review if you could provide title or link.

Comment by THOMAS E BECKNER on February 15, 2018 at 2:17pm
Greg, Have you seen any studies on PAPR units and CBRN filters for use in Fire Investigation's.