Flow for the Fire, Not Your Firefighters

It was just a couple weeks ago when I found out that the pump of a new engine we placed in service was preset to 120 PSI. While listening to a group of firefighters talk I overheard one of the engineers state they felt that the needed 145 PSI for that nozzle was too much to handle so they had it set to 120. If you’ve spent any amount of time on a hose line, you should know that 145 PSI pump discharge pressure on 200 foot is very manageable with a single firefighter, but two firefighters should overwhelmingly be able to handle that line because the nozzle reaction is a mere 66 pounds. 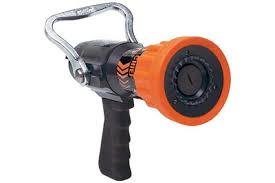 we want 75 PSI at the nozzle we must pump, at minimum, 145 PSI. 145-70=75. Now, that is a rough estimate of the friction loss in our hand line. If we truly wanted our FL value with our hose and nozzle package with the connections on our engine, we would have to put an in-line gauge on the end of the hose to get the exact number. If the pump is preset at 120 PSI, and we subtract the 70 of FL, we now have a nozzle pressure of 50 PSI. This is 25 PSI less than what the nozzle is rated for, and therefore the flow rate will be less as well. NFPA 1710 recommends that the first two lines off your apparatus must flow a minimum of 300 GPM together, and the golden number adopted as a rule of thumb in today’s fire service for a 1.75” hand line is a minimum of 150 GPM.

The nozzle at 50 PSI is not flowing the desired 150 GPM golden rule of thumb either. I did some consulting with the famous Dennis LeGear and he gave me a formula that would tell me what the roundabout flow would be with the nozzle pumped that low. I say a roundabout because we would again have to have a flow meter to give us an exact number, and the construction of our nozzle varies from others. The ball valves could be different, orifice, size, and more. The formula he gave me is: Rated Flow x √NP / √Rated NP

This value shows that the nozzle and hose package we have pumped at 120 PSI PDP is 28 GPM less than the desired standard and what it’s rated for. 28 GPM doesn’t seem like much, and for some room and contents fires, it may not even make a difference. It does make a difference when you throw a few kinks in the line, a bend or two down hallways or up some stairs, and the end result puts your men in the heat of battle with a weapon not flowing all it can in a fire environment that grows faster than ever before with today’s fuel packages. You’re essentially sending your men into a gun fight with a knife. Therefore, it is absolutely paramount you pump the pressure needed to flow the amount of water needed to match the fire you’re up against, not to meet the demands the firefighters. The firefighters can train to handle the line being pumped at 145 PSI. That’s zilch. There’s plenty of departments that still run 100 PSI nozzles on a 1.75” line with a PDP of 170 PSI to get their 100 PSI to the tip and max flow. 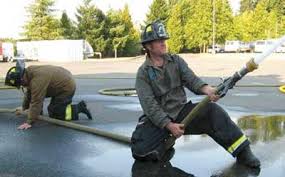 It all boils down to training and experience. It’s more than manageable to handle 66 pounds of NR. Please, match your flows to your fires and not your firefighters. They can complain all they want, but in the end, you don’t want to send them down a dark hallway facing what could be the fire of their life with a weapon that’s not suited for that war.