The year 1933 has a significant meaning to me as that was the year my mother was born, this year also was the commencement of the winds of war as Adolf Hitler was appointed Chancellor in Germany, the world was changing rapidly and our greatest generation was just starting to make their mark on our history. So how you may ask does all this relate to us in the fire service? On March 10th of that year a 6.4 magnitude earthquake measuring 6.4 hit the Los Angeles area, damage measured in the millions of dollars and killed over one hundred people, damage to buildings mostly consisting of un-reinforced masonry construction (URM) was extensive and led to changes in building construction materials which in turn we as firefighters can utilize to our advantage when sizing up Type III structures especially buildings that proudly display the year of construction on a cornerstone or center parapet.

The use of sand lime mortar to bond the masonry bricks together was the standard prior to 1933, this type of mortar does not bond as well to brick or stone as today’s Portland-cement mortar, its largest issue is that the sand lime mortar can be washed and flaked away by years of weather and in particular water such as from leaking pipes or hose streams. As far as floor and roof beams are concerned in buildings built prior to 1933 a firefighter can expect to find fire cut beams, these beams are supports cut on an angle so under fire conditions they pull out of the wall leaving it intact. It was a simple way to rebuild when an ordinary constructed building surrendered to the effects of fire, floor and roof supports prior to 1933 may also be set in small pockets in the bearing wall called “lets”.

Parapet walls are also usually found on ordinary constructed buildings, prior to 1933 these free standing walls could be of varying heights, in fact many architects made a signature mark on their buildings by designing very large parapets, these free standing walls bonded by the sand lime mortar have a long history of killing firefighters and when the more pre-fire intelligence you can get on the them the better, again let the signature year of 1933 be a starting point in gathering that intelligence.

A firefighter looking at a building built after 1933 will most likely find masonry bonded with cement, parapet walls no higher than 16 inches, and the use of steel rebar used as reinforcement. These buildings certainly pose a threat to firefighters but when gathering your pre-fire recon if the building’s birth year is known a smart firefighter or officer can begin to size up his or her enemy under fire conditions. Many downtowns or Main Streets in the U.S.A. proudly display the year the particular buildings were constructed, next time you see this think about what you may or may not see because of the 1933 earthquake.

To further study, I highly suggest researching the work of my mentors Chris Naum, Gregory Havel and John Mittendorf who all have sections on Fire Engineering and can provide a much more detailed look at vintage issues. Thank you to these members who have helped me become a student of building construction in Type III. 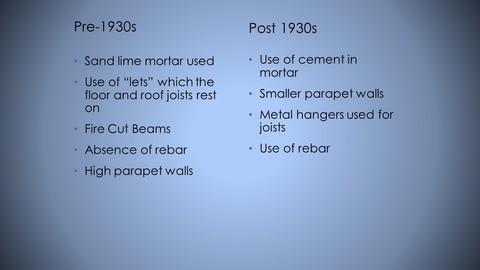 This video perfectly depicts how fire cut beams prominent prior to 1933 were made to perform notice the lets in the wall and how the building completely collapsed inward. Knowledge is power and while we cannot totally predict how a building will react your prefire knowledge will be of great use. "Know your buildings" , a term coined by the late great Frank Brannigan Google him! Or email me and I will send you info on this fire service icon.