When firefighters begin their careers, formal training starts with either a trip to the Academy or a Firefighter One/Two class.  It is these institutions which provide basic knowledge and where the groundwork is set.   After the foundation is poured, it is up to the individual firefighter to go back to their department and decide what standard of career they will build.

Recruits returning from the academy are eager to get on the line and go to work.   I mean lets face it, they just completed three to four month’s of grueling training where firefighting was preached and pounded into them day in and day out.  Stretching, advancing, throwing ladders, ventilation, forcible entry, RIT; oh, did I mention throwing ladders?  When firefighters graduate the academy they are geared up and ready to fight fire.

What about the other 80% of firefighting?  By this I mean, what happens when a report of a “possible structure fire” comes in and the first arriving company reports “nothing showing”.  The young firefighter who moments ago was full of adrenaline now enters the structure with hook/can in hand to find no smoke or fire.  The firefighter quickly shifting gears asks “well, what the hell do I do now?”

80% is strictly an arbitrary number in which I made up, however, it's intended to stress a point.  For some of us, the core/101 disciplines of firefighting doesn’t necessarily make up the bulk of what we perform on a daily basis.  In my opinion, the majority of work we execute is the “investigation”.  As mentioned in a previous article (The Rookie Doesn't Know A Trade), it would be great if fire academies were able to teach the nuances of boilers, stoves, light fixtures, generators, plumbing, electrical, etc.  Firefighters without much experience would be well served if taught the in-depth workings of these areas.  However, this idea is completely unattainable.  Plain and simple, there isn’t enough time to teach the infinite hazards within the structures we respond to.  It isn’t until they are on the line they begin to grasp the “art of investigating”.

When we respond for an “odor of smoke in the building” at a commercial occupancy we many times arrive to find nothing showing.  Upon making entry into the building, crews frequently find an odor of something burning; not Class A material, but more like the classic “I think it’s electrical”.  While interior crews investigate deeper into the building to find the source, IC typically orders a company to “check the roof”. 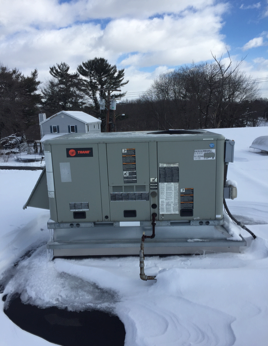 The following isn’t a step by step guideline, but more an overview of how spending a few short minutes could have a tremendous impact on a new firefighter.

Air handler’s are devices used to regulate and circulate air as part of a heating, ventilating, and air conditioning (HVAC) system.  Upon making entry onto the roofs of many commercial buildings, they can be identified as basically one or several large metal boxes.

The following is a limited overview of (AHU) - (RTU) components:

*Construction:  Due to being located on roof tops and exposed to the elements year round, AHU’s are usually constructed within a framing system made of galvanized steel with infill panels. 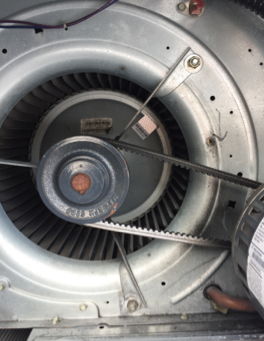 *Blowers: AHU’s many times have a squirrel cage blower powered by an eclectic motor to move the air.  Multiple blowers may exist in large commercial units and are typically placed both (1) at the end of the unit and (2) at the beginning of the ductwork (supply fan).  These blowers have belts which is the main purpose of this article and will be elaborated upon later.

*Heating and/or cooling elements:  Depending upon air temperature and humidity, (AHU’s) need to provide heating/cooling, or both.  This function is provided by heat exchanger coils within the air stream.

*Filter Racks or Chambers:  Air filters are most always present to provide clean air for people inside of the structure.  Filters tend to be placed first in the system in order to keep all downstream components clean.

*Sound Attenuators:  Blowers within (AHU’s) can create much vibration creating unwanted loud noises throughout the ductwork system.  To prevent this from happening, vibration isolators are inserted into the duct both before and after the AHU and between the fan compartment.

This is an extremely basic overview of a few components of (AHU) – (RTU) and should not be considered inclusive.

An easy yet beneficial drill to run with new fire fighter’s is to walk them through the investigation of an (AHU).  A great time to do this is to “piggy back” it on a day you are drilling with ladders.  Utilizing your firehouse or other building at your disposal with an (AHU), simply throw a ladder and get up onto the roof.

Training (Explain To Them)

For most firefighters who have been on the job for some time, this is a simple step during your investigation which becomes second nature.  We must stop for a few seconds and assume new firefighters coming on our jobs are not aware of (AHU’s) – (RTU’s) and how a simple burnt out belt on a blower could cause the activation of the 911 system.  Remember, new firefighters have been well trained to fight fully involved bedroom fires, not necessarily to investigate appliances.  Although simple and mundane, walking a new firefighter through investigating a burnt out belt could have a far reaching impact on the future of their career.

Special thanks to Capt. Mike Aquino for content review.