We know that the fires of today are burning hotter and faster than ever before. There are a number of contributing factors to this but what I feel is more important to take note of besides the growth time of fires in structures today is the amount of time these occupants have to get out of these buildings. It was said that in previous times of more legacy constructed homes that occupants had seventeen minutes to exit a structure fire, but today that number is as low as three to four minutes.

This means people are more likely to be trapped or succumb to fire conditions and this also means that the search maintains a high priority on the fire ground. It wasn’t too long ago that my department ran a fire where someone was jumping off the roof as they arrived on scene. The fire had started down stairs in the kitchen and an open stairwell acted like a chimney sending the smoke upstairs where he was sleeping. When the smoke detector alerted him he opened his bedroom door and was met by smoke that he couldn’t get past. He shut the door, climbed out the window, and jumped off the roof. This just shows how precious time is and how important it is to search these homes at every single fire we run. What if he took two deep breaths and collapsed right there at the top of the stairwell landing?

There are several departments who place the primary search at the very top of their list; this means the truck companies search ahead of the hose line with a can for their only means of protection. While I’m not telling you to do this, I am telling you to get to the front door as soon as possible, or any exterior door, and get a Life – Fire – Layout Size-Up because several victims are found within a body’s length reach of these doors; just as what happened in Herrin, IL this week when crews grabbed a lady from a well involved single family dwelling that was found lying behind the front door. The firefighter who is accessing the front door doesn’t need to just close the front door if it’s open to control the flow path and the firefighter forcing the door doesn’t need to just force the door and then pull it closed to secure it to prevent a flow path. What these firefighters need to do is get low and get a good look. What are they looking for exactly and what actions should they take? Let’s break down the Life – Fire – Layout Size-Up.

When the firefighter has accessed the entry point and it’s open, or they’ve forced it, they need to get down and sweep behind the door and sweep the immediate area. If the door is closed when the fire began and the victim succumbs to conditions as they try to exit their home then more than likely they collapse at, behind, or close to the door. It’s also important to note that search patterns for children are different than that of adults. Children will go to a place they feel secure and hide from danger, in a lot of cases this could be behind a door, and not just bedroom doors. They may run to the back of a utility room with an exterior door that leads to a garage or carport area and hide. When crews are softening the structure and forcing these doors they need to hook a foot to the frame, sweep behind the door, extend a full body’s length, and sweep that general area before moving on; also scanning their light under the smoke layer to see as far as they can looking for life and the fire.

While your sweeping the immediate area I mentioned you should be looking for fire too. If you’re the engine company going in for the attack you can locate where the smoke is coming from or see directly where the fire is. The engine may be masking up at the door and bleeding the line while another member of a company is in the rear forcing a door and performing the above function. When he forces the rear door, he sweeps the area, and when looking to the left he sees a large volume of fire. He can then radio this information to the attack crews and say, “Truck 1 to Fire Attack, be advised the fire is in the rear C-D corner.” Then they can acknowledge they received the information and make their way interior. This also lets the crews going in to perform a primary search know where to start their searches; which is as close to the seat of the fire as possible.

The layout. The layout part of this size-up is looking at the lay out of the home. When you’re down low searching for life and fire, also take note to the layout of the home. Is the stairwell to upstairs straight ahead? Are the stairs that lead down to the basement immediately to the right? Where’s the hallway, the living room, and the kitchen? Is it cluttered with hoarding conditions? We can tell a lot about a home just by how it looks from the front. We can usually tell where a bedroom is, where the living room is, and we know from running medical locals how multiple-family dwellings are laid out and where the stairs are that lead to the upper levels of these buildings. If we couple our exterior look at windows to aid in the size-up with a quick low profile sweep and layout in the door, we can make things a lot easier for us when it comes time to make entry and push towards the fire.

On November 14th, 2015 members of my career department pulled a man from an apartment fire that was in the living room floor just a few feet from two separate doors; the sliding glass door that leads to a porch and the front door to his apartment. The fire wasn’t that big, which is something to take note of in the pictures with the smoke lines. The first due crews stated there was very heavy smoke that filled the breezeway when the door was forced and you can see in the pictures that if the smoke was layered like it appears on the walls, a Life – Fire – Layout Size-Up would allow a firefighter to see a large portion of this apartment. It would also allow the firefighter performing that on this particular incident to locate the downed civilian well before they entered to actually attack the fire and make for a quicker grab. They could see the whole living room and all the way down the hallway. This is huge when it comes to locating fire in a bedroom down that hallway and looking for people before entering. 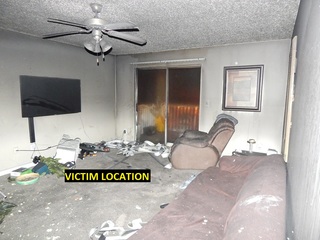 The man was pulled from the fire, had CPR began on him, and was transported to the hospital where he was later pronounced dead. Then a couple weeks later, in Rogersville where I volunteer, an 89 year old male perished in a garage fire. This man wasn’t far from the door when he was found during the investigation process. The crews on scene knew there was entrapment but water supply issues coupled with very heavy fire conditions prevented them from getting interior and unfortunately the male perished.

This size-up doesn’t take a lot of time and should be practiced every time you force a door prop, stretch a line to a door in training, and on every fire when conditions permit. When we practice like we play we increase the percentages of finding victims and saving lives. I’ve had just a few opportunities to save someone from a fire in my time. I’ve had close calls, seen several fatalities that couldn’t be gotten too, and was on the search team in the LODD of Beth Childers on July 11th of 2012 when her home caught on fire. She was able to exit the home with her husband and seventeen-year-old daughter but she went back inside, located her two-year-old grandson, and handed him out of a window to her family before she succumbed to the fire conditions. When we arrived on scene we were assigned the search and started a VES operation due to amount of fire out the Bravo and Charlie sides. While we searched, the conditions worsened in the living room area where the bedroom led into because holes formed in the floor, we backed up into the bedroom we entered, shut the door, and continued the targeted search. It was just a few minutes later the fire burnt through the bedroom door, the room began to flash, and we we’re forced to exit out the window we came in. (https://www.statter911.com/2012/07/11/alabama-firefighter-dies-savi...)

There will be a time that your chance comes to save a life and you should be prepared to do all you can to make that happen. You never know when that time will be or who it will be. It could be your best friend’s family member, your neighbors, a well-known local business owner, or a squatter in a vacant. It is because of this unknown that we must always prepare for the worst and show up ready to go. This Life – Fire – Layout Size-Up will improve those chances and aid in you finding the fire sometimes too.

While the death of Beth Childers and every other firefighter is unfortunate and sad; we shall never let the people who have fallen before us go without teaching us something. That fire gut checked me for a long-long time and I’ve never felt failure or looked back on any other fire and evaluated my actions more than I have that one. I will continuously train myself to do better on the next opportunity and will not let her death, or any other firefighters or civilians, go in vain. I ask that you learn from others experiences and train yourself and crew to be the best they can be, because one day, someone will depend on that.