Hump Day SOS In Command and Out of Control 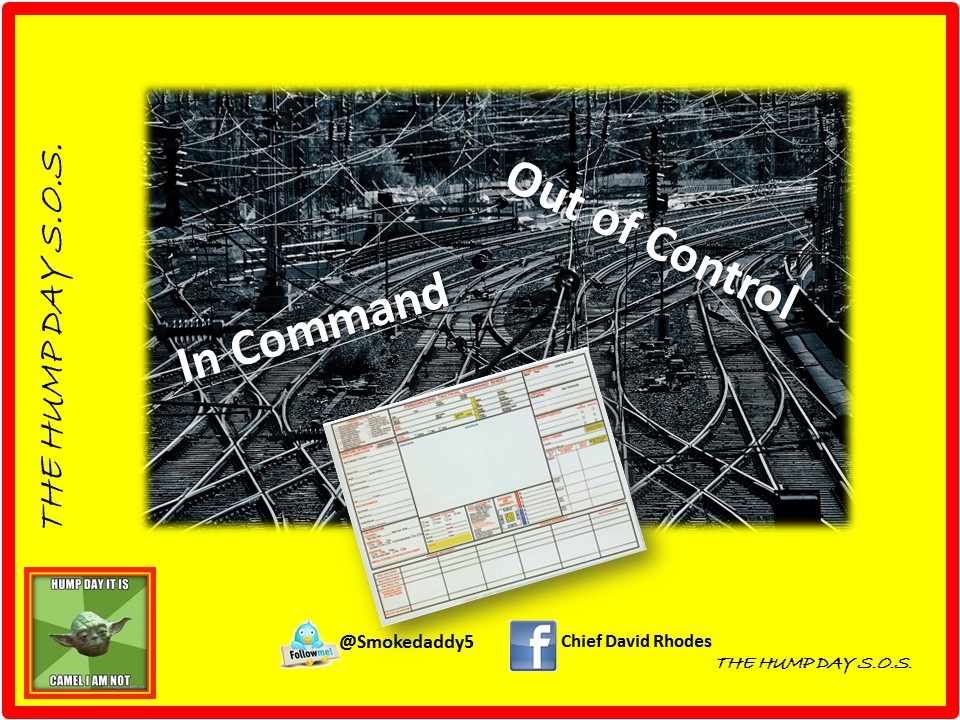 In Command and Out of Control

As you move up in rank, you reach a certain point in your career when you can no longer do everything yourself. Many of our best firefighters have promoted up only to crash and burn after a short while. They become miserable in their new position. This uncomfortable transition works against the grain of our go-getters and doers. These outstanding members are respected and very successful based on their ability to work a saw; force a door; read a situation; and know where to go, what to do, and how to do it. In the company officer ranks, there is still enough hands-on work and limited demands on time that people can still do most things themselves. They often do some delegating, but the scope is so small within the station that both approaches can yield results, and to the outside the end result is all that is often looked at.

When you make the move to battalion chief, things change and your responsibilities, tasks, and time become more of a balancing act. The higher in any organization you go, the more removed you are from the sharp end of the organization work (delivering service on the streets to the citizens), but there are more issues and tasks that you are responsible for. Many great firefighters and company officers are successful based on their ability to do things well and, when faced with an increased responsibility, tend to work longer hours and work harder to make sure they accomplish all the things they are tasked with. Most of us consider ourselves hands-on people and often fall into the trap of thinking it will take too long to show someone how to do something so we just do it ourselves.

This do-it-yourself approach most often ends in disaster. At first, you work hard to keep up with all the due dates, goals, and deadlines. Soon, you lose track of several tasks and time and you miss a deadline. Some look at you shocked at your lack of attention to detail. You have never been a slacker before. Your reputation carries the day, and this oversight is overlooked for now. Soon after, it happens again; you overcommit and fail to meet an expectation. Your bosses start to see a new you. Your members start to question if you can really do all things you used to do. You are in a tailspin, finishing a little of each task but never completing anything. You are working longer, harder than ever, and you begin to blame it on the promotion.

You are now at a level in the organization where you can no longer do things yourself. Now your focus has to be on establishing intent, building teams, delegating, and serving more as a project manager than a hands-on doer. You can look at it the same way as an incident. If you are the incident commander, you can’t be expected to drive all the trucks, make all the hookups, stretch all the lines, and search all the compartments of the building on fire. This is not to say you are not working. Managing projects, assembling information, conducting briefings, making plans, and communicating intent are all work. Just like a coach, you are not playing the game but you are calling the plays. You need assistants who specialize in training others on certain functions and those who complete components of the overall objective. This is a tough time in your career and a very hard lesson to learn for us Type A overachievers, because no one can do it as good as we can!

Accepting 70 Percent from Many

Assume that if you did something yourself, it would be done 100 percent right (in your mind, anyway). In many cases, you have to learn to accept 70 percent of what you would do to get momentum and results (finishing the project). Suppose you are tasked with writing a policy that would take a couple weeks of research and a day or two of writing and editing. At the end of two and half weeks, you would have 100 percent of what you wanted. But you would not have accomplished anything else.

You delegate the intent of the policy and the task to a person with expertise in the subject, and this person submits a draft policy to you. You spend one hour reviewing it and making changes that you feel finish the policy. You have just accomplished the task with a couple of quick conversations, choosing the right person for the job and doing a little cleanup. You can manage 10 or 15 things using this method vs. doing the one project yourself. Seventy percent doesn’t sound that great on the surface, but if you are only capable of 100 percent on one project in a given time and you accept 70 percent from 10 people on 10 different projects in the same timeframe, you can complete and accomplish what was going to be lost, forgotten, and missed. If you were a coach and one of your players was batting .700 in baseball, you would have the most productive hitter in the game!

At a certain point, when this process is running as efficiently as possible, you realize how smart some of your members are. You also learn that some you thought were rock stars are suffering from the same problems that you had to overcome. The others are so good that they are taking care of problems before you even know they existed. People ask you questions because you are in charge, and suddenly you don’t know the answer without calling someone to ask. This is absolutely terrifying, because you suddenly feel out of control. You are scared to death at the lack of control, but your members seem energized and new-found freedom and creativity take shape. The organization is solving problems that months earlier it couldn’t even see were problems. At this point, your work is supporting and maintaining a team that can manage the organization based on a mission and vision, no different than an incident.

Having the rock star team assembled to manage the organization or project, depending on your position, allows time for you to think, analyze, and identify opportunities to improve. The same holds true for your team members. You cannot overextend your team so that all they are doing is grinding out deadline after deadline. I have found that nearly 80 percent of all crisis management, deadlines, and panic modes in most fire departments are self-inflicted. This is a tell-tale sign of no clear direction, vision, or mission-driven thinking. This “thinking” time must be protected, and you have to learn to say no and accept no from your team. Don’t get to a point where you never have time to do things right but you always have time to do them over!

Being in command of an organization, project, or team must be looked at in the context of “the long haul.” Demanding immediate results and quick completion of tasks leads everyone, including you, on a burnout path. Before assigning projects and tasks, ask yourself if the work that is about to take up your team members’ valuable time has anything to do with your organization accomplishing its mission. If the answer is no, then don’t take it on-even if it means saying no.