Ladder Rescues--Training was the Key 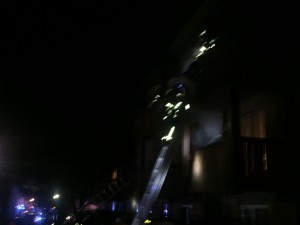 “What are you going to do at 3:00 in the morning when you get that call with people hanging out of windows with an active fire?”

We’ve all heard or said that in regards to our training and preparation at some point in our career. It’s safe to say that it can be considered cliché because it is mentioned so often. But, without a doubt and with no debate, it is true!

As it turned out, training, pride and doing the right thing ruled and I’m not surprised. I’m fortunate to work with great firefighters and officers.

When the first companies arrived, they had a large, 20-unit apartment building with two stories on the east side and three stories on the west side. Police, just prior to our arrival, reported heavy smoke conditions. The first company found heavy smokes conditions and people yelling for help from balconies on both sides of the building from the second and third stories.

The first two initial companies, one being an ambulance, immediately sized-up the situation and put life safety first and started deploying ground ladders. The first due captain and his firefighter entered apartments that did not have balconies occupied to check for victims while the ambulance crew went from balcony to balcony getting victims to the ground.

The third and fourth companies assisted with deploying additional ladders to more victims. The first company did find some victims inside their units and led them to the balconies for rescue.

The first due captain was aware enough, based on his ability to read the conditions and his familiarity of the building from pre-planning for fire, to radio that the fire was in the basement (ground floor on the west side). That proved valuable for the IC to get the fifth company to deploy an attack line to the fire.

We have a helmet cam video that has not been released yet, but the work was solid, communication was done only when necessary, everybody was calm and they knew what they needed to do. A total of seven persons were rescued, five by ladder from five different balconies.

The rest of the incident went well with the fire being confined to the area of origin. The open stairwells allowed heavy smoke and heat to fill the only means of egress for occupants. Many of the apartments were smoke filled from attempts by occupants to exit their buildings. 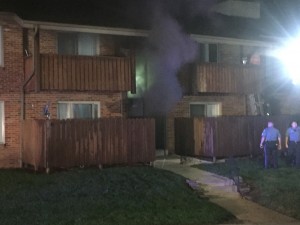 This fire would not have gone as it did if it were not for the training and engagement of our officers and members on a daily basis. Just a month prior to this fire, multi-company drills were performed based on very similar scenarios. In addition, when coming on shift, our officers believe that this call would happen at 3:45 in the morning and that they would have fire and victims. They were prepared and it showed.

Moving ladders from balcony to balcony is not easy if you don’t regularly train and drill with them. Our two ambulance firefighters moved a 35’ ground ladder to multiple balconies on multiple sides of this building. Our paramedics are cross-trained and we expect them to be firefighters whenever possible, without utilizing them, rescues would have been delayed.

Even as well as things went, there is still room for improvement. There are some lessons we have identified and will address in the future.

The purpose of sharing this is not to talk about how good my guys are, (they are), but instead to impress on everybody that reads this just how important training is. How important being prepared for and expecting fire when called is. It might not be today or tomorrow, but someday you will be tested and you better be ready. You just never know when you will get that call at 3 in the morning with people hanging out of windows and balconies.

Training matters and believing that IT could happen makes you prepare.