Size Up: Not always what it seems - part 2

A few months ago I posted an article on fireground size up titled, "Size Up's: Not just what it is, but what it was". This article is the second part on size ups. It focuses on two important factors that are not always discussed when talking about size ups. A major key to being able to perform a good size up actually begins well before the fire with taking the time to get to know your district inside out and performing pre-plans. The pictures below are from my first due district. They are from a storage facility that is set back off the main roadway. It is located behind an apartment complex with the entrance being through a parking lot to a thrift store. Companies pass it all the time going up and down the road. Being in congested city, we have buildings on top of buildings and thus, until recently, we have never noticed its layout, which you will see below. The second set of photos also illustrates the importance of pre-planning and especially knowing your district along with another key factor. Accurate, timely reports from the interior and the importance of performing the initial 360 walk around (or receiving reports from all sides). When talking about size ups we typically stress the importance of getting a report from the roof or from the rear, but what about the importance of updates from the interior? Have you ever been on second due waiting for a report or yelling at the mic "what to do you got already" as you wait for more info than "one story residential, with light smoke showing" from the first due. Does the chief have to ask the first due companies "what do you got in there"? The second set of photos shows the importance of sizing up the interior as we go and giving a good report back to command.

This set of photos is of a self storage unit that we pass a lot just going up and down the road. Photo 1 is of the main driveway and how we would approach it for a reported fire. As you can see it looks pretty standard. 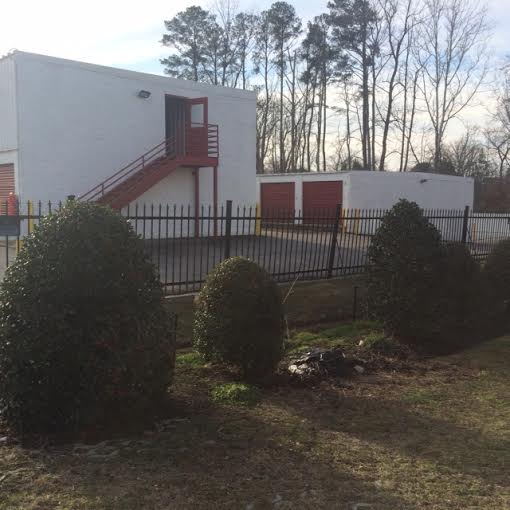 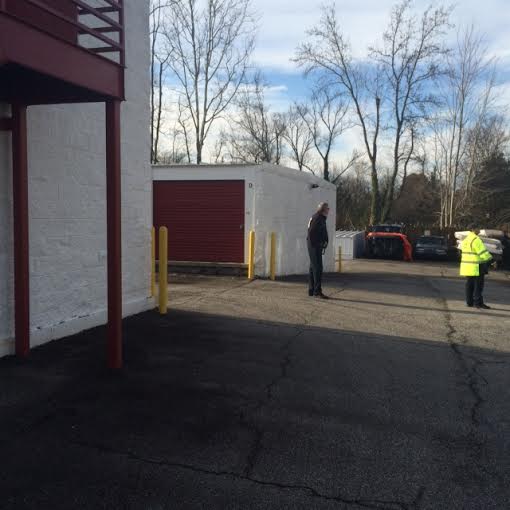 The second photo (above) is looking into the facility from the entrance. What might catch your eye is the white roof in the distance, to the left of the parked cars. Keep scrolling down to see what I mean by the importance of doing a complete 360 walk around and knowing your district. 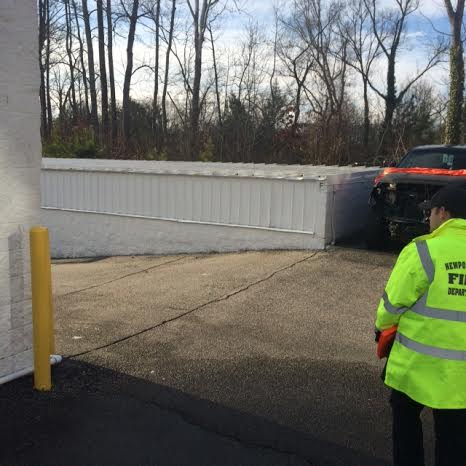 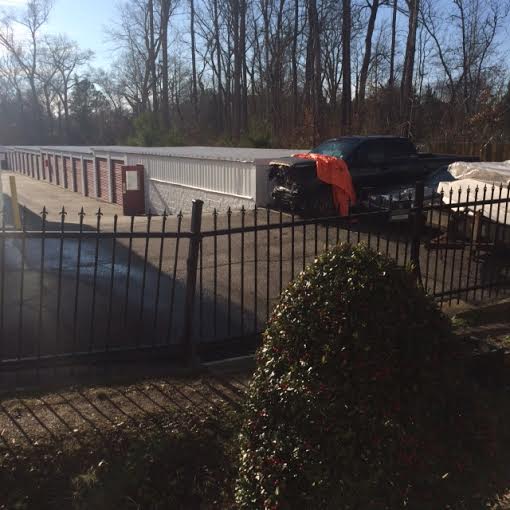 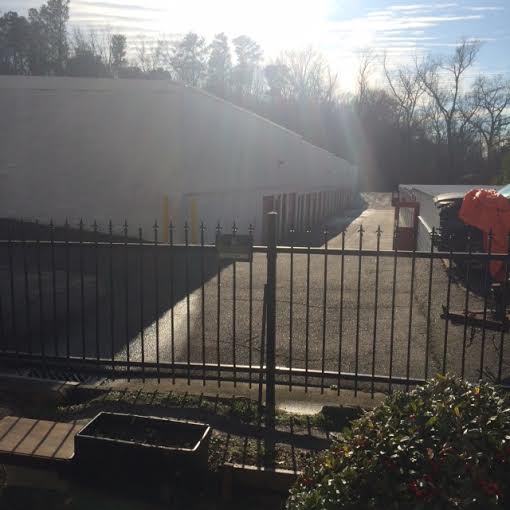 As you can see, not only is the roof of the third building at even height with the drive-way, it is completely blocked by the 3 story apartment building a mere 200 feet away. This completely blocks it from anyone's view who doesn't walk up to it. Also, not seen from the entrance or roadway is that the second building is actually a two stories with a walkout basement. It's hard to see in the picture with the sun's position, but the entrance is narrow and a fire truck would barely fit into the complex and definitely not down those grades. Not only is knowing your district so important, but actually getting a 360 degree view of all four sides. If it's not possible to walk around the entire building than you need to absolutely get a timely report from any sides you didn't make it around.

This next set of photos is from a new indoor "bounce house" that is located in a one story strip mall. These types of stores are opening up all over by us. They simply rent out a storefront, gut it and blow up inflatable bounce houses in it. They come and go all the time. This particular one is located in a strip mall that sees a high turnover of stores. We happened to be called there for a child with their hand stuck in a toy machine. The issue was quickly resolved and we started looking around since it was our first time in the store. What quickly caught my attention was the large opening made in the cinder block wall near the truss and roof decking. 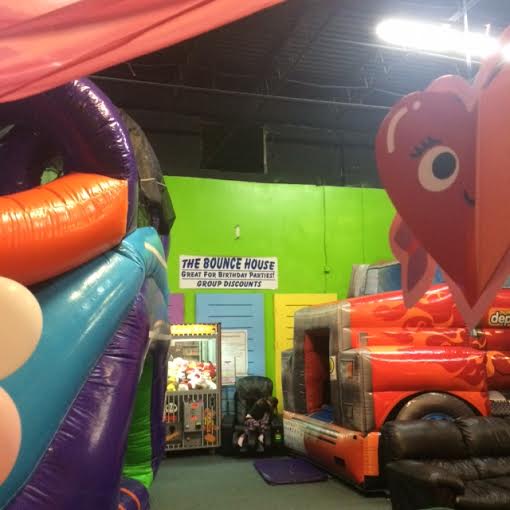 The large opening can be seen in the picture directly above the "bounce house" sign where the green meets the black paint. In person, the opening is roughly 5x5 or 6x6. As you can imagine, this quickly caught my attention so I went to investigate. You can see below why pre planning and reports from the interior are so critical. You see they have a loft in the back room. Used as a staff office (and it could easily be converted for birthday parties). So not only does the large opening in the cinder block walls provide for heat and hot gases to escape the compartment right along the trusses and metal roof decking, it also provides for rapid smoke spread, acting as a horizontal chimney. Remember, smoke, heat, and fire look for the path of least resistance and travel up until they meet resistance than out than down. This opening completely does away with what little compartmentalization there was of the store. 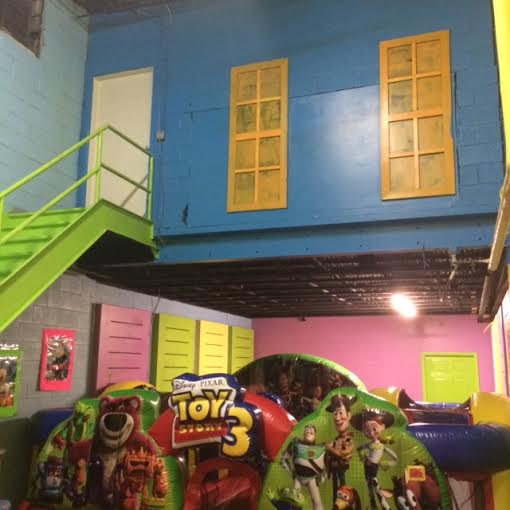 Unless informed from the interior, the IC will think nothing more than the operation is in a one story strip mall. On the inside, you may see the smoke coming through the opening (which is visible from the doorway) or you may notice it on the thermal imaging camera (TIC). It will probably be significantly hotter than the rest of the wall, especially if the fire is on the backside of it. The IC needs to be made aware of several things on the interior of this store. First, the exposed truss and roof systems (no drop ceilings as expected in this strip mall). Second, breaches in the fire wall, and third, the "loft" in the back room. These are three critical things that greatly affect commands decision making.

Keep in mind that if you are going to go up those stairs to search the "loft" (besides the fact that you are very deep inside a non-combustible building with exposed truss that is also in a maze of plastic, inflatable jump houses that will be deflating and tangling you so you better have a search rope at a minimum) you need to let IC know that you have found a "second floor", "stairway", or "loft". You can call it what you want, just make sure command knows that you no longer have a one story building. If you do not let command know and get into trouble while up there, the RIT team is going to be in for one tough search. They will go on thinking they are searching for you in a single story occupancy when you are trapped on a second floor, near the roof with an opening that was cut out of the cinder block and is drawing heat towards you.

Hopefully, these pictures have helped show you what we mean when we say "perfoming a good size up is critical". A size up is so much more than "one story residential". A size up must include a view of, or at least a report from, each side of the building. Also, when entering a building, especially a commercial one, you need to give IC an update or size up of the interior conditions. Consider the difference in these two examples if you were the IC. Which one would you want your companies giving you?

"Engine 1 to Command, we have smoke inside the building a few feet off the ceiling" or "Engine 1 to command, we have smoke banked down a few feet off the ceiling, we've popped ceiling tiles, no fire overhead. we have an open floor plan with cubicles". Big difference in those two reports, both of which can be delivered in under 10 seconds. However, one gives the IC a much better, initial picture of what is going on inside the building, what crews are going to encounter, and how the fire may behave. It will also help the RIT be much better prepared if they are needed. Hopefully, this has helped you better understand size ups or at least got you thinking. Stay safe.