Previously in TRUST Makes Leadership Possible, Part 1 we briefly discussed the concept of leaders trusting their people (trust down the chain of command). But there is another side to the two-way street that is trust, and it is just as important if not more so.

In the first part I quoted Gen. Colin Powell during an interview about trust. In the same interview Gen. Powell says that when he was a new officer at the infantry school in Ft. Benning, one of his Sergeants told him, “Lieutenant, you’ll know you’re a leader when people follow you…if only out of curiosity”. What that means is, that even when your people may not know, or understand where you are going, they will follow you wherever that is, until the end, because they trust you. Management may be possible by someone with power and authority, but leadership is ONLY possible when trust exists. Nothing is as powerful as trust, or as difficult to earn, or as easy to lose.

Development of trust as a leader begins before you are ever in charge of anyone. For firefighters, it begins on your first day and goes on throughout the rest of your career. Trust is earned in everything you do, how you do it and why you do it. Firefighters WILL remember how you were when you were a firefighter. You can’t sit in the recliner, complain about training or doing pre-fire plans or inspections, never wear a uniform for 10 years, and then suddenly when you get promoted demand that everyone respect the chain of command and follow all the rules. They may comply due to your official authority, but they will never respect or trust you. Lead by example from day one, and when you get promoted, everyone will know exactly what to expect. Take care of your people. You may not give them everything they always want, but make sure they get what they need to be successful. Study, learn, train and be as technically proficient at the craft of firefighting as you can be. Give away all the credit when things go right, and take all the responsibility when things go wrong. Be fair and be consistent. Be prepared to make the hard, right decisions that may not be very popular. But, if your people trust you, they will know you are doing the right thing, even though they may not like it.

In part 1, we talked about policy-based decisions vs. values-based decisions. Policies and procedures are necessary, but as stated before, we can’t write everything down for our people. We have to be able to trust that they will go out and make good decisions in order to do the right thing and create excellent outcomes in all situations they find themselves in.

In a policy-based organization, people tend to not make decisions that are outside of the policies because they are worried about getting in trouble with the Chief. They become more focused on what the policy says rather than what the right thing to do is, and if the policy doesn’t address the situation they are facing, they are not sure what to do, and then they have to call the boss to find out.

In one word, our mission is to SERVE, to serve those people who call us for help, all those we encounter in our community, as well as the people we lead. If you want to be able to trust your people to always go out and make good decisions to achieve that mission in everything they do, you have to set expectations, lead by example and then trust them to do the right thing, even when that right thing may be somewhat outside the parameters of the written policy/procedure, or when there is no policy. 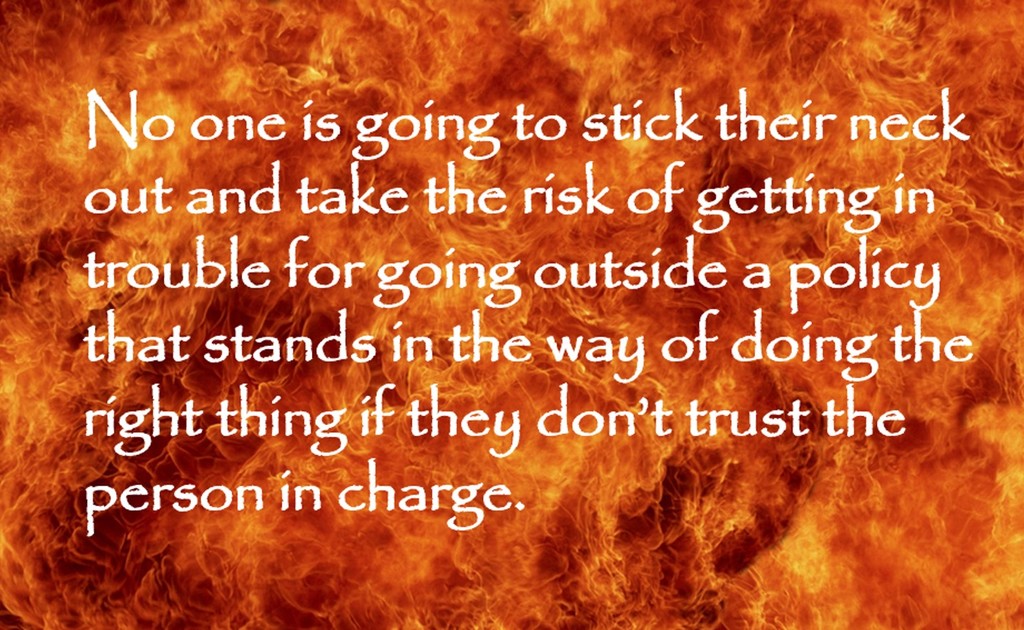 However, those decisions won’t happen if your people don’t trust you (trust up the chain of command). No one is going to stick their neck out and take the risk of getting in trouble for going outside a policy that stands in the way of doing the right thing if they don’t trust the person in charge. They have to trust that you will support those right decisions. Expect that not all of those decisions, even when made for the right reasons, will always turn out well. Even when the decision turns out to be a bad one, you must support their efforts if they can justify that decision based on the situation, the information they had available to them at the time and that they were acting in line with the beliefs and core values of the organization. Then help them learn to make better decisions in the future. Understand that supporting those decisions may mean that you stand up, take responsibility for the decisions your people make and place yourself between them and the powers that be higher up the chain of command. People will go out of their way, over and above what their written job description says, or what the written policy tells them is necessary, in order to achieve excellent outcomes if they feel empowered and supported to do so. They’ll do it because they want to do the right thing (because the organization hired the right people to begin with), because they believe what you and the organization believe in, and because they trust you, and know that you trust them, and they don’t want to disappoint you or the organization.

In order for any organization to achieve its full potential, leaders must trust their people to make good decisions, to do the right thing in support of the mission and in line with the values of the organization. Equally important is the fact that in order for that to happen, people need to be able to trust the leader, and know that the leader has their back when they make those types of decisions. Leadership is possible only when trust exists, both up and down the chain of command.  Trust is a force multiplier!

CHRIS LANGLOIS is a Captain with the Omaha (NE) Fire Department and a 28-year veteran of the fire service serving in volunteer, combination and career fire departments. He has been with the Omaha Fire Department for the last 15 years, including over 5 years with the OFD Training Division. He currently serves as the captain of an engine company and is a plans team manager with the Nebraska Task Force 1 US&R Team. He was the 2014 Nebraska Society of Fire Service Instructors- Instructor of the Year and was an FDIC instructor in 2013 and 2014. His national certifications include firefighter II, instructor II, officer II, driver/operator, incident safety officer, and NREMT-paramedic. He holds an associate degree in fire science, a bachelor's degree in public fire administration, a master's degree in executive fire service leadership and is pursuing his EFO certification.