It is a quiet Sunday morning and as you the day's shift commander are reading the paper and thinking about brunch and the day's football games when suddenly the tones drop for a reported building fire in your downtown district, as you hear the address you think about the building run through your size up thoughts. Upon arrival you find heavy smoke coming from what appears to be all three floors of an Ordinary construction Type III building in the center of your town's once vibrant business district the building has a parking lot on the Bravo side and an attached like size and era legacy constructed building on the Delta side.

You find a well seated basement fire with extension due to multiple voids in the building built in 1896, the fire is winning you go defensive and do all that is required and proper in most firefighting manuals you have studied and begin the process of large streams and letting the building basically burn in an attempt to protect the Delta exposures and rest of the buildings in the continuous row.

A mutual aid truck officer meets you at your command post and points to the parking lot on the Bravo side, he advises he has secured a water source and can get a good hit on the fire that is surely going to consume the roof if it hasn't already done so. You advise him to go ahead and you continue going through your command of the fire, roughly forty-five minutes into the incident there is a thunderous noise lots of commotion and when the dust and smokes settles a mountain of bricks lie in a pile that was once an empty parking lot and a supposedly good aerial spot. What happened???

Many years ago when downtown business districts were constructed, most buildings were built in a continuous row i.e. "Main Street" type of buildings, it is quite common for these buildings to be constructed sharing a party wall, a simple definition of a party wall is a bearing wall that supports the floors and roofs of two buildings.The collapse or DEMOLITION of one of the buildings served by the party wall may affect the stability of the remaining building. I capitalized the word demolition to emphasize the need for you and your respective departments to know what is going on and coming down in your downtown areas, if you have a parking lot in the middle of buildings built at the turn or prior of the last century raise a red flag and think party wall! Then get out and take a look at some telltale signs prior your fire.

Most likely when constructed, both sides of the party walls are concealed within the building and not subjected to weather and environment, think of exposed party walls as a parapet that just happens to begin and the foundation and goes up, if you are a student of building construction or have read any of mine or other much more experienced fire service instructors speak about parapets you know that they are dangerous because they are exposed to the elements same thing is the case with the exposed party wall. These walls also are probably not designed originally to be a fire wall and while they may act as a barrier fire and heat will quickly spread through the wall further weakening it creating a collapse concern.

Collapse zones need to be established early on but a smart commander or fire officer knows more about the wall other than they can collapse, one must know the body of work prior to the fire event, and the party wall provides many clues.

War Stories are one of the things that makes our profession one of the best, but once we usually hear or see pics about an old fire in our town we simply forget about it and move on, well the next time you pass that picture hanging in your day room or kitchen of a grand fire on your Main Street take a closer look and see if anything stands in that spot today. If there is a parking lot or a patch of grass in the middle of a block long row of buildings get out and take a closer look for party walls and if there has been any deterioration to the wall, look for empty lots! 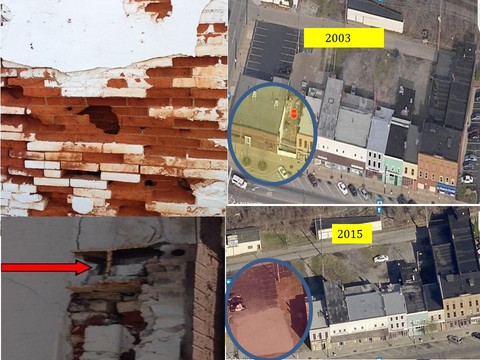 How many new firefighters are on your department in the past 12 years? Recon all parts of your downtown buildings.

A large fire event took place at this downtown building in 1969, yes 46 years ago, what makes this relevant today is the picture below, notice the braces on the party wall and the eccentric load placed by the advertising sign today 2015. Use your history to better prepare for your Main Street fire.

As a firefighter, officer or commander of a fire in an ordinary construction continuous block to be successful one needs to be fully engaged and aware of the area its changes currently and even those that took place of relevance prior to our career.