This means the best way into the structure isn’t always going to be the front door. It might be a second floor window or a rear door. It depends on factors such as the fire conditions, fire location, collapses, last known location of the firefighter, and secondary means of egress identified during the size up. Remember, secondary means of egress does not always have to be a ground ladder on the upper floors. It’s an alternative way into or out of the building. Paying attention to the radio traffic from the time you are dispatched will help you decide which locations are best to start your search.

If the RIT has four firefighters they can split into two teams with each team searching from different points towards each other. This is pretty standard, one team searching left and the other searching right until they meet in the middle. This might be good if you have to search the entire basement, but if you are short staffed and are operating for a while on your own there are other ways to search in teams that might extend your operations and leave a firefighter help if the first team gets into trouble.

One option is for a RIT of three or four firefighters to split into two teams like before and perform a “leap frog search”. “Leap frog” searching lets us get the most out of the time and energy of the small teams performing the search. When leap frogging, the crew splits into two teams with one team starting the search, taking a search rope or tag line with them and the other team of one or two holding ready to go at the entrance point. The team at the entrance is there and ready to help the first team that’s searching. They might be called to rescue the first crew if they get into trouble, bring in additional tools, or to immediately replace the first team if they need to change out SCBA cylinders in order to keep working on the rescue.

In the last scenario, the first team needs to exit before completing the search and finding the firefighter. They can leave the rope end where they last searched and exit. The second team follows rope in and begins searching right where the first team ended, not wasting air or energy re-searching an area already covered.

It’s important to point out that the first team’s job isn’t over once they are replaced by the second. The first team replaces their SCBA cylinders and gathers tools then stages, ready to go at the entrance ready to replace the second team immediately when needed. Also, when using the “Leap Frog” search with a team of three the single firefighter will always be left at the ready at the entrance. If the first team exits the single firefighter replaces one of the two from the first team and they re-enter as a team of two. “Leap frog” searches allows for a team of one or two firefighters to be ready to enter and keep rescue efforts going when you do not have the staffing to place a second RIT in service immediately.

Another search option is Vent Enter Isolate Search or VEIS, which is a good search method for a two or three member RIT to use. Two firefighters can begin the search on the lower floor and the single firefighter can perform VEIS on the upper floor. This allows the smaller team to cover both floors simultaneously. Likewise, VEIS is something that can easily work on a single story structure also. Many successful rescues have been made using VEIS in one story houses. While the team of two is searching the main area of the house, the single firefighter can be searching bedrooms by performing VEIS on the other side of the house. VEIS is not something to try without proper training and experience and further hands-on training needs to be conducted if any RIT plans on using VEIS in their operations. 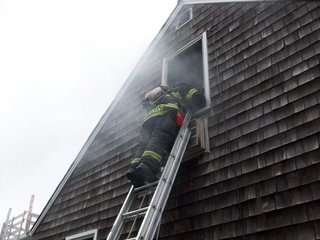