It wasn't until I was at a friends house recently that I realized just how "Child Proof" a home can be. There seems to be a gismo that can block any size opening or keep any type of knob from turning on the market. While this is great for the safety of our children these products can create a nightmare for us. There is in fact so many different safety products available that I will start by only discussing baby gates in this post.

Baby gates come in just about any shape and size you can think of. From $10 wooden gates to $100 metal gates that bolt into the wall, if you have an area of a house you want closed off to children they make a gate for it. Gates can be held in place by pressure, screwed into the wall, free-standing, or wrapped around banisters and come in various widths and heights. Many are actually to tall to just climb over. Majority of the gates are self-closing also, just ask any parent how many times they have had a gate close on an ankle when they were in a hurry. This can create quite an entrapment hazard for us. Image coming across a baby gate at the entrance to a room, it is too tall to climb over and you can't just tug it off the wall (remember, it's baby proof, toddlers slam things). You manage to find the latch and get it to open with your gloves and PPE on! You get half way through it when it closes on your boot. Not life or death yet, but still startling and may require you to stop, turn around, not panic, and push the gate off your boot.

I've added some inexpensive gates to some search drills and the results ranged from comical to downright scary to say the least. Since I only used the inexpensive gates, they were quite easy to remove with a pull or push. But that leaves you holding a 36" or larger gate, the size of the opening you want to get through. The tendency is to just climb over it or throw it ahead of you, this is where the entanglement hazards were made. I've had one get caught on my bunker pants pocket, SCBA harness, and in one case, caught on my low pressure line and dislodge my facepiece. It also creates quite an obstacle for the engine company to advance a hoseline over. What I found works best is to stay calm and think!

It is very easy to become surprised and frustrated with you come across an unexpected baby gate. Keep in mind that where there is one there is probably more too. Just about any gate can be removed, some with a tug and others with some force of a tool. What you don't want is to become frustrated by a difficult gate or caught off guard by the gate and thrown off track. What counts most is what you do with it once it's been removed. The best thing to do is to take a few seconds and get it out of your way. Put it up on a counter or couch or under a table, just calmly get it out of your way. It can be passed back to other company members to put in the middle of hallway if you have to but do not leave it right near the doorway! Once you're frustrated at the gate, the gate will win every time. Gates can be one solid piece or three to four pieces held together with metal pegs. You have to stay calm and think or the gate will win. The tendency to just throw it once it's removed is where I've seen it come back to cause problems later, even if it's just The gate getting in the way again. Remember to stay calm, think, and don't get frustrated. Take a few seconds upfront to move it away from the entrance way you and other crews will be using now because it will be worth it later on.

Photos are courtesy of a friend who wishes to stay anonymous 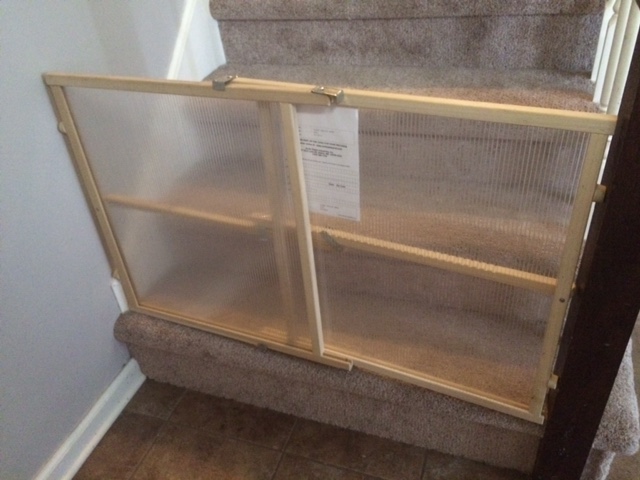