“We don't fight as many fires as we use to kid”, is that right anymore?

We often hear during training “we don't have fires anymore” we have all gotten so use to saying this that we do so without really knowing the truth of the statistics. Just prior to his untimely death Glenn Gaines, Deputy US Fire Administrator made a comment during a conference call of fire service leadership that I thought was a warning to us all. Chief Gaines basically said that a lot of people don't realize that residential structure fires are, and have been increasing every year for the past few years. This perked my attention and unfortunately Chief Gaines passed away suddenly before I was able to further pick his brain about this trend and what he thought was causing it, what it meant for the american fire service moving forward?

There is no doubt in my mind that telling our city leaders, our residents and even our firefighters that there are less fires only hurts our ability to be the best fire service we can be. By selling this mantra of “we don't go to fires anymore” we discount the importance fire suppression has in our country. This mantra of less fires, which we as a service preach gets thrown back in our face during budget hearings, union negotiations and even fundraisers for the local volunteer department.

When we tell the public we go to less fires does it make them, the public more complacent when it comes to supporting the fire service or even practicing their own fire safety at home? I have noticed a significant increase in the number of residential fires where I live and work where we find either no smoke alarms present or alarms that are not working because a lack of a battery. In 2015 should we still be fighting the smoke detector battle in our communities? As time passed on and we continued to believe the mantra that we go to less fires did we stop focusing on prevention as much as we did maybe 10 - 15 years ago? Did we, as a fire service become complacent about smoke detectors just like we did about going to residential structure fires?

What are we telling our firefighters when we constantly tell them we go to less fires? To me it says fire isn't as important as it once was and therefore it could be perceived that your knowledge and skills as it relates to building construction, fire dynamics as well as physical skills like throwing ladders and stretching hose lines with proficiency is less important than other tasks we do and teach. Every job we do is important! When someone dials 911 and they cant breath or have no pulse CPR is important, when they are bleeding, bleeding control is important, everything is important, but for us to downplay fire, based upon the mantra that we go to less fires is WRONG both as a mantra but also statistically. 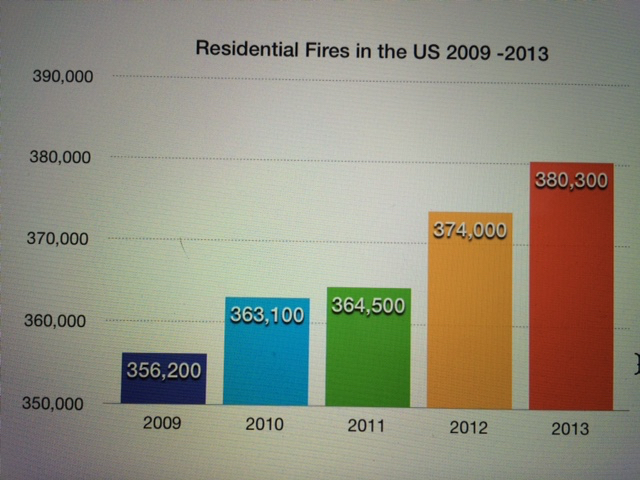 To continue my unscientific study I spoke to a few fire chief friends in different  parts of the country and all but one told me that over the past few years they have noticed more structure fires. Chief Gaines further pointed out that one of the reason he believed we weren't talking about this issue is where the fire are occurring. Fires are increasing in our rural and suburban communities while they continue to decrease in many metro areas where at one time they were known for all the big fires and big fire statistics.

As neighborhoods in our bigger cities are rehabbed and warehouses are turned into condos and ghettoes become the new hipster place to live the new building construction, changes in local demographics and increased fire protection appear to be reducing the structural fire work load of many of the long time busier FD’s in our nation. As this has occurred the suburbs have gotten older, as well as the people who once lived in the city have been pushed out by higher rent and the higher cost of homeowners to the suburban and rural areas. The neighborhoods that were built in the 80’s and 90’s are now into their second and third homeowners, or are becoming rentals. Wiring is worn, the HVAC hasn't been maintained and the all too common problem of hoarding has made its way from the cities to small town america. Structure fires in residential homes are on the rise!

The statistic don't lie and ether does what I am seeing where I work in Goshen OH. We need to stop selling ourselves short when talking to our firefighters, our residents and our elected officials and make sure we all understand that fire is still killing more than 3,000 people per year in the US, injuring more than 17,000 and causing more than 11 billion in fire loss a year.

Is it time for us to check the numbers?

Are we telling the truth in our community when we say there are less fires?

Or is it something we have heard for so long that we now believe it without even looking at the true statistics?

Thank you Glen Gaines for waking up this fire chief to the growing problem in my community and throughout the US. We are working to refocus our priorities on fire suppression, fire prevention and fire education because in Goshen Ohio fires are going up not down and we have a duty to act!