Tradition vs "The way we've always done it." 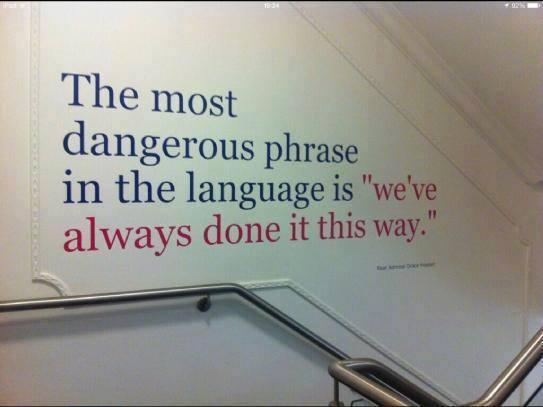 I was sent this picture by a colleague of mine the other day, and after nearly ten years in the Fire Service, it still amazes me to hear the phrase "that's how we've always done it."  At the same time, I hear people talk about how tradition needs to go away.  When did "tradition" become such a loaded word?  Why can we not have tradition, but we must continue to do things "the way we've always done them?"

When you hear someone say "that's how we've always done it" they are almost never referring to something traditional.  Often, they are referring to an outdated tactic, an obsolete tool or piece of equipment, or an excuse to not move forward.  This can range from the actions of a single firefighter or company to the operations of an entire fire department or even a city.  Fighting a vehicle fire without an SCBA because "that's how we've always done it" or leaning on your Halligan while you relentlessly kick a door because "that's how you've always done it" are not viable reasons to keep doing things that way.  We live in a time where firefighters don't need to poison their lungs or wreck their knees because we have tools and proper personal protective equipment.  We no longer need to do things "the way we've always done them."

On the flip side of the coin, we have tradition.  A word that is currently of the four-letter variety in many places, due to a few of the wrong people doing things "the way they've always done them" and simply labeling them tradition.  When the right people refer to tradition, many times they are referring to something firefighters take pride in.  A station or company logo, mascot, or motto and practices such as washing a new rig as soon as it's home for the first time or "pushing" it into the station (a practice that has been handed down since horse-drawn engines).  We refer to the calling of our career.  The traditional firefighter that comes to mind is the stalwart servant of the community, who is there night or day to help.  Our tradition of service alongside other brave, like-minded men and women.  Our tradition of overcoming against all odds, and our tradition of supporting and comforting one another in the bitterest of defeats.  The tradition of our brotherhood.

Hooks, ladders, buckets, and axes have been "tools of the trade" since colonial times.  Hose lines have been in use since Boston firefighters pushed hand-pump engines to fires in 1654.  At the same time, we've worn distinct helmets that identify us as American firefighters since Henry Gratacap created the first "New Yorkers" in the 1830's.  Take a look at these "traditional" images we see, tools we use, and PPE we wear, and you should be noticing something: they aren't "the way they've always been."

The pike-pole, once made of wooden whaling hooks, has evolved into the fiberglass-shafted National Hook, or the aircraft-steel-shafted Halligan (NY) Hook, or the Boston Rake, or any number of other variants.  Ladders, once made of wood and glue, are now mostly made of aluminum or steel.  They can reach higher and hold more weight.  The axe found a nearly universal partner, once it was married to the Halligan pry bar.  Hose lines have become larger in diameter and we've added all manner of adjustable nozzles, tips, and monitors to them.  Buckets became pump cans and fire extinguishers.  Bucket brigades turned into hand-pushed engines, which evolved to be horse-driven, and finally became motor-driven engines.  Our helmets, while retaining our traditional look, have been made lighter, stronger, and more protective.  When speaking trumpets gave way to two-way radios, we still decided to uphold their tradition.  It is point of pride for fire officers to wear the trumpets, or bugles, on their lapels.  None of these traditional tools, tactics, and pieces of equipment are "the way they always were."   We didn't reinvent the wheel, but all have changed in some way and all have evolved.

As firefighters, it's time we open our eyes.  It's time we do things the right way, instead of doing things "the way we've always done them."  We must remember what attracted us to our career and what kept us here.  Honor, courage, pride, and commitment all are traditions of the brotherhood that is the Fire Service.  We all, in some form or another, have these traits in us.  Our tradition is to continually adapt and overcome.  To evolve.  Our true traditions are something we should uphold and continue. Something great.  Tradition is progress.  "We've always done it this way," is NOT tradition. It's an excuse.  It's an excuse to remain in the dark ages of the fire service. It's an excuse to needlessly endanger ourselves, our brothers and sisters, and our fire departments.  We must be able differentiate between tradition and excuses.  The key to having our traditions be reflected positively, is not allowing tradition to become "the way we've always done it."

Thanks a ton Nick!  It means a lot!