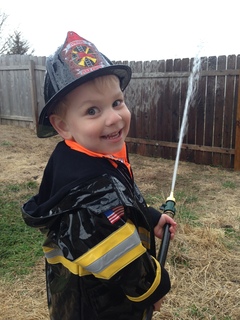 During the invocation at this years FDIC, Father John Carney compared firefighters to children.  He went on to explain that the qualities shared among children and firefighters was to be trusting, dependant, resilient, honest, sometimes tackless, playful, and to have great imagination.  A firefighters quest for knowledge and understanding is no different.

For some time now my oldest son, Aidan, has been asking "why?" about everything.  Recently while outside playing firefighter (totally his idea, not mine) he started asking questions.  "Daddy...why is this nozzle different?", "Daddy...Why do firefighters wear helmets?", "Daddy...Why is my fire coat so long?".  This went on for at least five minutes as we saved our two dogs from the imaginary inferno.

As I stood there watching my son spray the hose around the backyard I realized that he is just like me and I am just like him.  As a child, I could frequently be found tearing things apart in order to see how they worked.  My fire service career hasn't been much different. I have spent hours researching equipment and tactics, dissecting them piece by piece in an attempt to figure out not only how they work, but why.

As firefighters, we have an obligation to understand not only the "how" but also the "why".  A mentor of mine once said "Until we understand why, we don't have a skill, we have a mimic. I don't want mimics, I want skilled firefighters". This statement is profound in everything we do, not just fire suppression.  It can be applied to Hazardous Materials, Special Rescue, and even EMS calls.  I've been told that you could train a circus monkey to start an IV (and as a Paramedic I believe that's possible) but it takes an understanding of why IV access is beneficial to know when and where it is needed.

All throughout the history of the fire service people have questioned things.  This isn't a new idea and it certainly isn't going away.  I have had some of the most in depth and sometimes heated debates over the "whys" of the fire service. From the first fire pump to the latest and greatest tool, someone along the way asked questions and sought out the answers.  Challenging ideas and looking for better ways to do things in the fire service is inevitable, otherwise we'd still be fighting fires with buckets.

Going back to what Father Carney said, children look up to us because in a lot of ways, we are just like them.  So don't be afraid to ask why or to challenge ideas.  Be the curious kid.