Out With The Old/In With The New 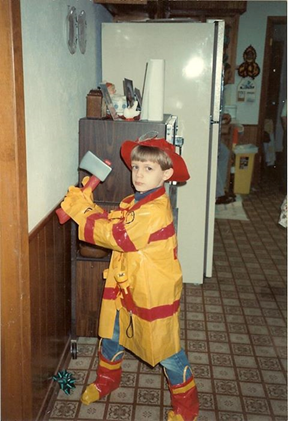 I have a photo of a young boy around the age of six or seven years old dressed in a fire fighter outfit he got for Christmas, axe ready to slay the dragon.  As a young boy, he would walk past the fire station in his neighborhood and dream of being a firefighter; not a fire fighter in the bigger, more populous cities, but a firefighter at that particular station.  Twenty-one years later, he is a recruit at this station, my station.

The American Fire Service was modeled as a para-military structure dating all the way back to the formation of the Roman Army in 6 A.D., when it instituted its Corps of Vigiles, who were to protect the City of Rome and its empires for the next four hundred years.  The same core para-military value is instilled into the fire service even to this day – deconstruct; reconstruct.

Why not find something the recruit is doing right and praise him for it?  If we search for the bad in our people, their performances will start dictating our pursuit.  Do we not want the best firefighters working in our organization?  Why try twenty years to develop a great firefighter, when we can do it in one?  Greatness isn’t tenure; greatness is about mindset and attitude.

In the past, our fire service culture was such that when a new firefighter was brought into the ranks he/she was nothing until their rite of passage.  My questions is, why do we recruit a new hire with all the passion in the world for the fire service and then try to take that passion away from him?  Don’t we want that recruit to wake up every morning before shift, telling himself he is living the dream and loving to come to work?

With that newly hired recruit I mentioned earlier, it was my privilege as a newly promoted Captain to mentor him.  My Fire Chief and I wanted to do something different with this probationary firefighter, to think outside the box, to change the culture.  We wanted to embrace him, to lay the road for success, to build his future, to invest in him not only as a member of the American fire service but also as a member of society, and, lastly, to invest in his future as a husband, father, brother, and son.  We wanted him to realize why being a firefighter truly is the greatest job in the world.

I let him know he was accepted not by horseplay, degrading remarks, hazing, or practical jokes but by taking him out into the bay and sitting with him, listening to him, training with him, and showing him what it was going to take to be successful in our department.  In my office, I sat with him across my desk from me and let him know that I wanted to come back after I retired and find him sitting at that desk as a Captain, mentoring his recruit.

I had to give him a vision, a goal, a light at the end of the tunnel.   By doing this, I hoped he would fully understand my philosophy of where I wanted him to be and what I expected from him.  Was it too much?  How can you reach the moon, if you don’t shoot for the stars?   He began to understand I was investing in him as both a firefighter and a brother, not merely an employee.

Believe it or not, as he neared the completion of his first year, he had not fought a good working fire – sure the occasional small trash fire or showing up just in time for overhaul, but not gaining the possession of calling a fire one his own.  Then, about two weeks prior to his full year, he finally had his first working fire.  I was able to capture a picture of him after overhaul had been completed.  I had the picture blown up and all the firefighters/mentors at his station, including myself, signed it.  The picture was presented to him on the day of his swearing in ceremony for making probation.  He was so proud of that picture; he said he would never forget that day, the day he got to put into use the training we had worked so hard on the past year.  That moment, that day, w

as his rite of passage!

My hope for my legacy was not what people thought of me, how good I was, how smart I was,  or that I was a great firefighter.  My legacy was how I left this department and its people.  My hope for my legacy was that I made both better.  I wanted my people to say they succeeded not only in their career but in life, as well, because of the influence I had on them.  What a profound legacy to leave behind.  This was my mission.

Full circle:  One of my firefighters stated that when he was in fire school he was told by the instructor that instructors are not here to make you a firefighter; they are here to help you pass the state test; you become a firefighter when you get hired on by a department.  When you hire a new recruit, the goal or mission is that you inspire, motivate, cultivate and invest in his future.  By implementing these four valuable points, it comes full circle from the new recruit back to you, whether you are the officer, senior firefighter, or just in the recruit’s presence.  The new fire recruit inspires, motivates, cultivates and invest in your future, as well.  The passion for the fire service is continued.

When we had the swearing in ceremony for my fire fighter, I came to the realization while welcoming him to the brotherhood, that his passion renewed my own.  I was able to look at the room full of his family members, including his fiancé and realize I am leaving a legacy behind that not only groomed an American firefighter, but laid a path for his family to be a part of the American Fire Service.

In the near very future, there will be yet another young person standing in front of the fire station and dreaming about how it would be the greatest job in the world to be a firefighter and slay the dragon.  Now, a legacy and new culture awaits to change his life forever.