This is a wing-type nursing home.  The center or hub of the home contains the nurses stations, kitchen and dining hall, recreation area, offices and the like.  The wings contain the rooms for the residents.  Apparently,  there was a malfunction with the built-in automatic fire protection system.

This fire occurs in one of the wings.  This wing contains 12 rooms with two residents in each room. This particular wing contains all non-ambulatory residents.

The fire occurs at 0630 hours on a Sunday morning. Your crew is initially assigned Search.  There is 1 hose line containing but not controlling the fire at the time you are assigned. 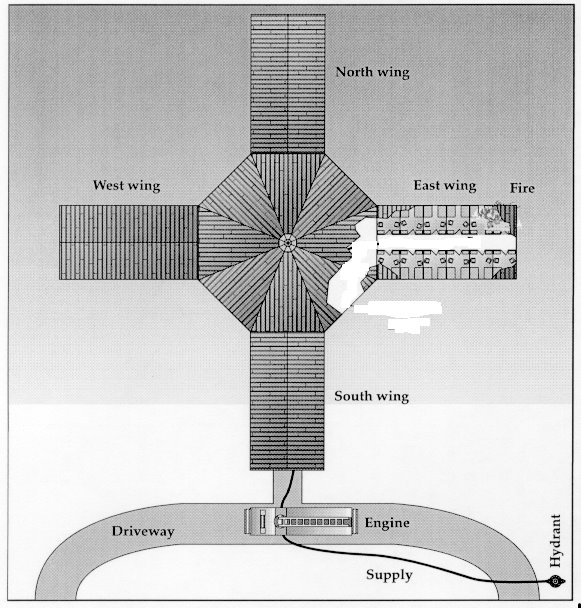 Before I ask specific questions what are your initial thoughts and ideas concerning search and subsequent rescue of this fire?

Comment by Skip Coleman on February 21, 2014 at 4:29pm
Thanks grant. Another great use of oriented VES.

We'd get 3 Engines and Ladder plus BC, Medic and EMS BC.  Manpower I think we'd need third alarm figuring nearly a crew for each victim (having seen the Norwich Fire Video).  Controlling of the fire needs to happen if we are to be successful in rescue.  My initial crew would enter behind the hose line, closing the doors to each room as we work our way closest to fire to maintain tenable space.  Judging by the amount of smoke coming out each of the window either doors are open or the fire is in the attic space.  First step is to pull ceiling in room next to fire room once we are in to see if its above us.

If there is no fire in attic space and we can PPV hall once fire is down then we can protect in place and then remove via hallway.  Smoke in the hallway is a problem as far as egress for victims.

My guess is fire is well developed and above us that a VES operation will be best.  window size and height looks best to have victims sent out windows to waiting crews.

Since we've closed the interior doors while making the initial search attempt as each window is broken from the outside in VES the smoke in each room should left, 2 rescuers go in and grab victims and hand them to waiting crew at window. We will repeat this all the way down each side of hallway, ideally having  2 crews assigned to each side of hallway (2-4 out and 2-4 in making grabs).

Comment by Skip Coleman on February 19, 2014 at 6:48am
Great comments Eric. Keep them coming. I like your concern for manpower and EMS. Victim / recuer ratio for ALS is at minimum two to one. Staffing will be a great concern. As it relates to ICS ( I know this is centered around search) but get some more chief officers. An EMS Group or Branch will probably be needed and take a lot off the plate of the IC.

Skip, initial thoughts are roughly the same as Chief Dippolito's, do the nurses know how many are trapped or unaccounted for and have they begun moving patient's in the unaffected area or sheltering in place, but I would add a third being the placement of a line for protection and fire suppression, primarily for protection of the crew and occupants.  As the initial incident commander, I would be striking a second alarm, not necessarily for fire suppression, simply for the assistance in moving patients and assistance with fire suppression.

I would also include contacting the medical unit for a potential mass casualty.  As stated, there is smoke noted from other windows in a different wing, which may be simply be the smoke travel, or extension in a void space.  A preplan of this particular building, would be beneficial for the occupancy, and their limitations.  Obviously there is some type of malfunction, therefore, a highrise pack would be a great tool, not to use in connection with the suppression system, but to simply extend any lines or to use through a gated wye to provide two lines rather than the one.

In addition to requesting the truck team to begin the vertical ventilation, I may consider the possibility of a trench cut, thus potentially cutting off the fire extension to other areas of the building not involved.  Manpower initially is going to be an issue, and while the room is self ventilated, is the patient viable in the initial fire room, if not, unfortunately I would have to say let's write them off, and while a very tough call, doing the greater good is what it is we are here for.

Comment by Skip Coleman on February 17, 2014 at 4:51pm
Good comments from both. Consider staffing and victim/rescuer ratio. There will be a lot of tough decisions to make from the git-go. In my opinion, you do the best for the most. Defend in place is certainly a consideration and I want water on an isolated fire and aggressive ventilation ASAP. If you do decide to remove victims initially, how much staffing will that take (at least 1 rescuer for each victim) and there are 24 victims in this wing.
Don't just drive by these places on the way back from a run. Stop and go in, take a look around and go back to the kitchen table and talk about it.

Comment by Justin Renner on February 17, 2014 at 12:22pm
My initial thoughts upon arrival of this fire would be to request a 2nd or 3rd alarm due to high occupancy risk and Victim removal. We would entering the South wing following the attack crew in. The first task would be to close the doors that lead into each wing. A hold in place would be my first thought for the persons in the building, until more units arrive on scene. The East wing would be my first area of the building to search and clear. We have a couple options of victim removal, roll the beds out the exit doors or into a safe area of the building (or draw sheet), victims removed out the window with or without mattress (because leaving Pt's outside on the ground may not be a good option). The hospital, additional senior homes or a local hotel should be contacted as a staging location for removed/displaced residence. Another thought would be to assist fire attack with deploying a backup line. Getting this fire under control may have to happen first in order to begin a viable rescue attempt. If we lose the building, our rescue then turns into a recovery.
IC needs to get in contact with staff to establish number residence, medical Hx, ambulatory Pt's, and bed ridden Pt's. Accountability needs to be kept of the FF's on scene and the residence in the facility.

Skip, some of my very initial thoughts while responding would be; 1) Do the nurses know how many are trapped/unaccounted for 2) Have the nurses begun moving the patients in the unaffected area or is shelter in place an option.

Upon arrival, the smoke I see coming out a window in a different wing would tell me that shelter in place is not an option. I would ask IC and/or nursing staff if they know which rooms may still be occupied. I'd consider having a Truck Co start cutting those white window frames in to doors in the rooms that reportedly have victims trapped so that we can send any victims we find out that way rather than dragging them through more IDLH atmosphere.