In the northern latitudes and at higher elevations across North America, snow, ice, and bitter cold affect fireground operations for four or five months each year.  Winter operations and training demand different approaches. 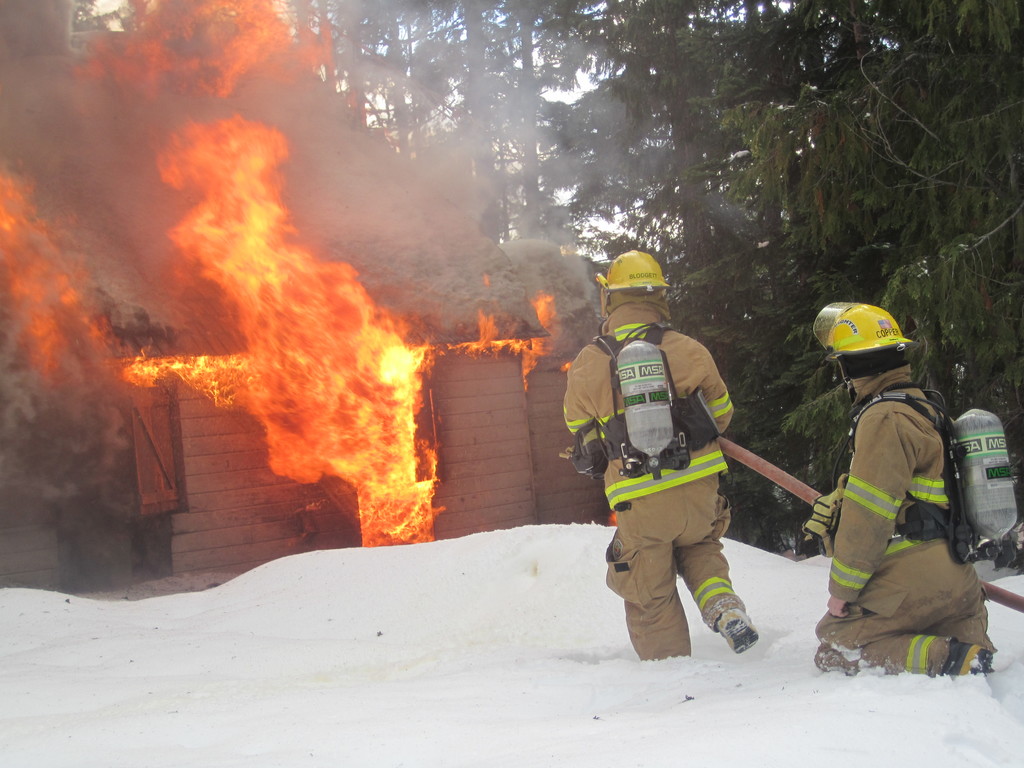 In the high desert of Central Oregon, winter operations start with a change of mindset, says Mark Taylor, Deputy Chief of Training at Bend Fire and Rescue.  With many sunny days even in winter, it’s not unusual to see daytime temperatures in the forties, inspiring outdoor lovers to wear shorts, while at night, temperatures plummet into the teens.  Because the days are pleasant, people caught in accident or rescue situations may be less prepared for a frigid night, so hypothermia and exposure are more important issues than usual.

Cold is the norm for many months at Chena Goldstream Fire and Rescue outside Fairbanks, Alaska.  Captain Chris Hunger has to respond in some of the most extreme conditions anywhere.

“Snow on the ground makes everything about fire and EMS more difficult, from advancing hose lines (and) throwing ladders to getting EMS patients out of their house and into the ambulance.  Firefighting in 40 below zero adds a whole new batch of problems. Fire apparatus and pumps tend to freeze, hose lines freeze to the ground,” Hunger says.  He recommends bringing more manpower and resources than normal, noting that the cold wears on firefighters, and “things break at 40 below that you never could imagine.”

Firefighter safety is always an important operational consideration, but points of emphasis may differ in winter.  Frostbite or hypothermia can be problems with extended scene time.  On a fire scene, icy ladder rungs and snow loads make ventilation and roof operations more problematic.

Code three driving always has risks, but snow or black ice exacerbate the dangers, making sufficient stopping distance more critical. Chief Taylor compared driving a fire engine on bad roads to dealing with a runaway freight train.  Chief Mic Eby of Hoodland Fire in Welches, Oregon echoes Taylor’s thoughts on driving.  He encourages volunteers to drive carefully to the station so they are all safe to respond on a rig, and he advises apparatus operators to consider road conditions in relation to response speed.

According to Eby, one of the big winter challenges on the wet west side of the Cascade Mountains is gaining access to homes, whether for a first aid call or a fire.  Long driveways, deep snow, and overhanging branches combine to make life difficult for apparatus drivers in the foothills.  Hauling supply line through a foot or two of snow might make a great crossfit workout, but it can be a nightmare on a fire. 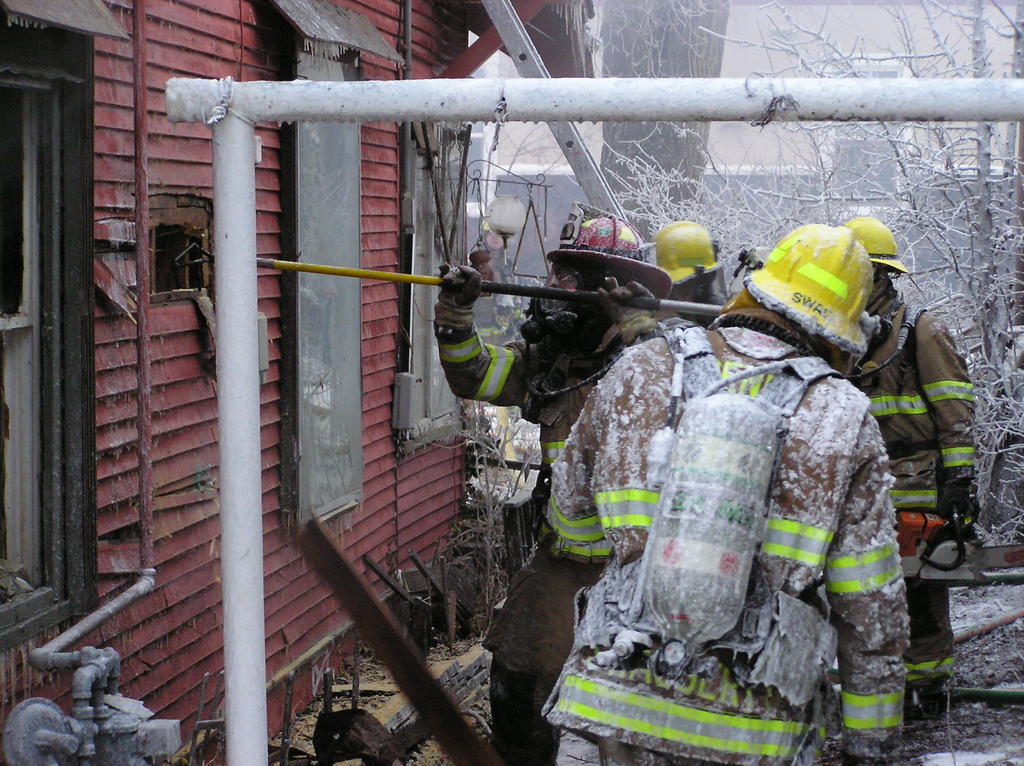 Hydrants buried under snow can also slow down a fire company.  Those challenges prompted Hoodland Lieutenant John Creel to invent the Hydrant Snorkel after years of dealing with heavy snow on Mount Hood in northern Oregon.  Creel notes that, “There are over 200 ski areas with associated towns, just in the United States” and many other cities with significant snowfall. Of course, there are also more home fires during the winter months due to a variety of heating sources, and deep snow adds an access hurdle, which can ultimately affect the area’s ISO rating.

Minutes matter on any fire response, so taking five minutes to find a hydrant could be the difference between routine extinguishment and a disaster.  Creel’s Hydrant Snorkels are eight feet tall and have multiple ports, so there is no snowstorm sudden enough to bury it.  Fire crews don’t have to waste time digging out the hydrant.  Hoodland Fire has over 40 snorkels dotting the ski town of Government Camp, and other towns are following suit. 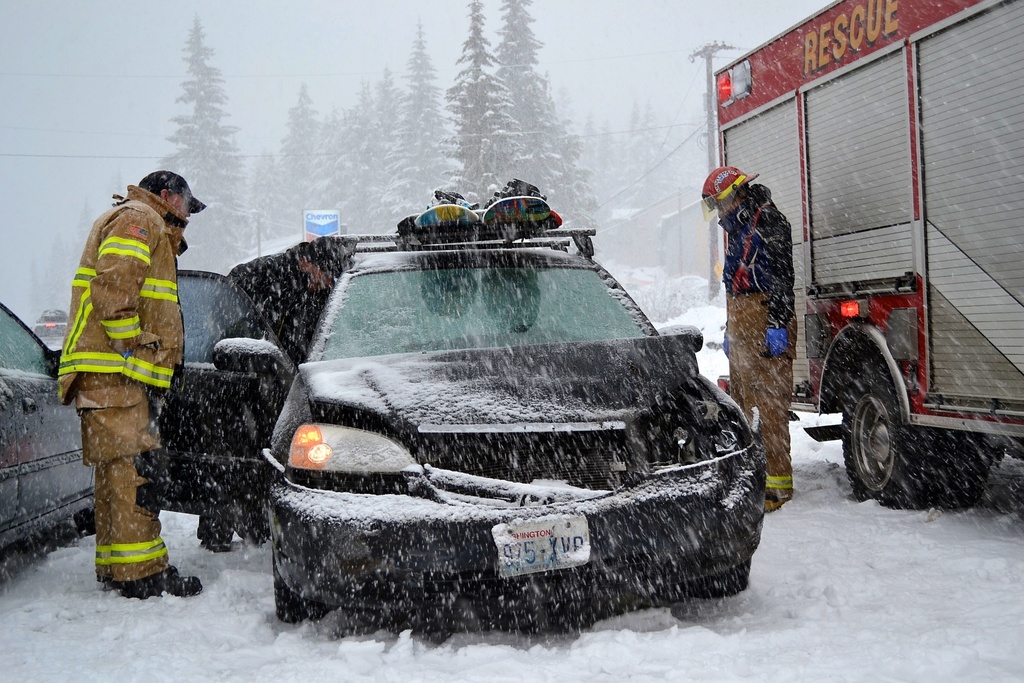 The Collins Lake fire was an eye opener for multiple agencies.  Energy sapping cold took a toll on crews working exterior hoselines, and it was hard to find a place to rotate firefighters off the line and into a warm environment.  When temperatures are significantly below freezing, crews sitting on exposure lines can quickly become miserable.  Once the intense work of a fire is done, danger can increase.  Sweat can build up under the vapor barrier liner of turnouts, and the body’s core temperature can drop, so access to a comfortable environment is essential for cold weather rehab.  Pop up tents with propane heaters are a viable solution.  If nothing else, try rotating people into a warm engine cab for ten minutes.

Bend Fire employs a portable rehab pack, the contents of which change depending on the season.  In summer, it leans toward heat emergencies with plenty of water. In the winter, they support cold weather rehab, with thermoses of hot water rotated daily.  While caffeinated beverages are never optimal for hydration, a little coffee or hot chocolate can go a long way toward warming up a firefighter who has been working an exposure line for an hour.

“Just like the heat will sap you in summer, the cold will get you in the winter,” Taylor says.

Finding quality training can also be a challenge during winter.  A fire trailer drill or summer bungalow burn-to-learn training cannot duplicate what will happen at ski area condos in the middle of a January night.

Captain Hunger encourages training in the cold.  Otherwise, firefighters might not be as prepared for the difference between winter and summer.  Given the extreme cold in Alaska, Chena Goldstream has an SOG that cuts off outside training at 20 below zero.  Beyond that, and department reminders to dress in layers, training changes little for winter.

In Central Oregon, ice forms on many irrigation ponds in the area.  Because of inconsistent temperatures, the ice is far more dangerous than frozen lakes in Minnesota or Ontario.  That’s why every Bend firefighter is trained in ice rescue operations, including the use of a special dry suit to go in the water. 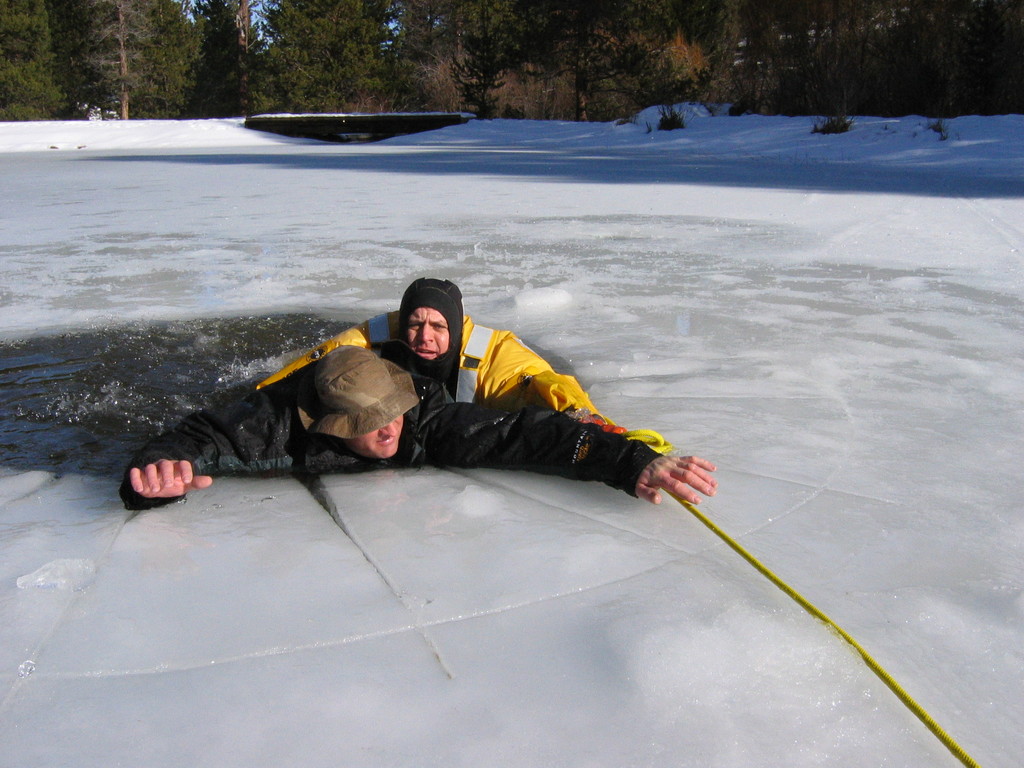 Extreme cold can also cause pump problems.  At Chena Goldstream, new rigs come with an “arctic insulation package” which includes heaters connected to the radiator with a fan for air circulation, and exhaust stacks running “through the pump area and out the top of the rigs to help scavenge heat from them,” says Hunger.  Their engines have more heaters, while a rescue trailer totes portable heaters for scene deployment, available for either firefighters or patients.

Bend Fire engines run with dry pumps in the winter so they won’t freeze up.  This means engineers have to take an extra step to get water primed, and they need to plan for that.

Chief Eby mentioned a couple other concepts to keep in mind when the mercury drops, like letting nozzle dribble so they don’t freeze up, and keeping SCBA bottles warm enough so they continue working properly.  Because Hoodland Fire has many dirt roads and gets heavy snow in parts of the district, most of their vehicles have four-wheel drive.  With part of the district usually above snowline, while part is rarely in the snow, Hoodland must be flexible in chain deployment.

When asked what advice he would give to new officers unaccustomed to winter conditions, Taylor said, “Talk to the folks who have been there and find out what issues they’ve had.”  He believes history is the best instructor.  Winter demands more time for everything, including response from mutual aid agencies. If more resources are needed, snowy, icy roads could slow them down, so order them quickly.

Whatever type of wintry climate a fire department has, they need to consider options for training, standard operating guidelines, and apparatus modifications to ensure safe and effective winter operations.