PICK UP THE FLAG

Pick up the flag

Iconic pictures from the World Trade Center, Iwo Jima, Gettysburg and Pearl Harbor all share a common thread. During the chaotic aftermath of these unspeakable horrors someone quieted fear, started healing pain and suffering, restored hope and returned focus of mission. They stepped up and inspired others to engage as a team. They picked up the flag.

The position of flag bearer is one of great honor, then and now. During the Civil War, the regimental flag bearer marked the location and direction for those serving under that flag. Due to the noise and smoke of battle, verbal orders were often unheard and the formal leader could not be seen. The flag bearer led the way.

The battle stories from history tell of the unarmed flag bearers and the honor and pride that they felt in their position. They knew the mission and where they were going. They also knew that they were a primary target for the enemy and yet they went anyway and they led from the front.

If ever the flag bearer was fallen, a team mate disarmed themselves and picked up the flag.  History records this action being repeated numerous times during single battles. Those who picked up the flag did so without fear, instructions or orders. They saw a need, they honored their traditions and they were honored to move into action by their unit pride and team pride.

Regardless of whether today we serve in a division, a regiment, a battalion, a group or a company one fact remains unchanged; every platoon or shift team needs a flag bearer.

Who in your group has the flag?

Are they honoring the history, tradition and pride of the Fire Service?

Are they leading the group forward or just roaming in the smoke?

Is your flag bearer too weary, too wounded to continue? Who will step up to take their place?

Someone will always be sniping and someone will carry the flag to victory. Who will it be?

I want my team flag to be out front. I hope your team chases me but you won’t overtake me.

Sometimes the formal leader can’t be heard in the noise or seen in the smoke. Pick up the flag.

Ineffective leaders and winding rivers share a common trait. They always take the path of least resistance. The flag can’t wait for leadership to fall from the heavens.  Informal team leaders step out and lead from the front. Your team and the Fire Service need you.

Thank you for reading.

Really nice post Warren. I like the analogy and the message. I'm struggling with why more folks haven't responded to such a great message. None the less, fine job, I'll be sharing this with the troops.

Warren, I love this post here is my favorite flag photo, courtesy of Mike Dugan. The hero bucking this ladder is Staff Sergeant Christian  Philip Engeldrum, 39,  a New York City Firefighter who was killed in Iraq on November 29, 2004. Engledrum was assigned to the New York 1st Battalion, 69th Infantry Regiment, supporting Operation Iraqi Freedom. He is the forty fourth member in the history of the FDNY to be killed while on active military duty in service of his country. His is a true "Flag Bearer" Chris was never too weary, Chris never faltered, Chris never hesitated, Chris was loyal to his duty, his nation and his fellow firefighters and his fellow soldiers. God bless and keep Chris and all of our flag bearers. 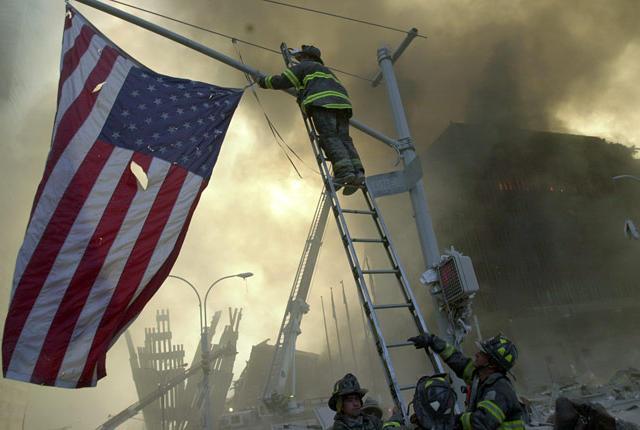