The Duty To Lead - Part Two

Last month, we got started discussing the importance of being a good role model for your company as a new officer. This continuation will delve a bit deeper into the importance of fireground competence for company officers and the effects that it will have on your company and the operations that you are involved in. Additionally, we will start to identify some attitudes and personality traits that will positively impact your company. 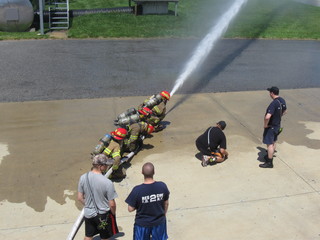 In a life threatening environment, there is no substitute for a competent leader. You can be the nicest person in the world, take the crew on fishing trips every single weekend, and memorize the names of everyone’s kids, dogs, and goldfish, but at the end of the day, if you fail to perform on a fire, they will not trust you. I am not implying that a company officer will be the model of perfection and be able to perform every single fireground skill with impeccable accuracy. However, an officer needs to have a baseline level of competence that exceeds that of the new recruit coming out of the training academy or a firefighter I class.

Think about this in a reality-based scenario. As the first arriving truck company to an apartment fire with people trapped, your forcible entry firefighter comes to a door that he is having a hard time with. Between the engine crew breathing down his neck waiting for the door to open, a half-dozen firefighters and officers in the hallway telling him to “hold the bar THAT way” and “pry it THIS way”, he will be looking to you to act as the voice of reason and assist him in succeeding in his task.

Do you know enough about the basics to fill those shoes? Or will you be the officer who retreats to his office after telling his crew that “you all need to practice your forcible entry, it took WAY too long to get in there”. I’m not saying that a company officer needs to physically do the jobs of all of his firefighters when they have trouble. All I am stressing is that an officer needs to have the competence to give them an assist when it is necessary to maintain a smooth and efficient fireground.

When you are placed in charge of a company, your attitude, actions, words, and overall demeanor will be constantly scrutinized. Sure, I get it…everyone is entitled to have a bad day once in a while. However, as a company officer, you are NOT entitled to have one of those bad days at the firehouse. The way you approach the day’s challenges will set the tone and define the attitude of your entire crew. If you eagerly attack the challenges of the job with 100% effort, it will not take long for your crew to follow suit. Conversely, if you approach training, calls, and classes with outward negativity, I guarantee that the members of your company will hop on that bandwagon in the blink of an eye.

Again, it’s important to clarify what I am saying here. I can’t stand company officers who are brown nosing suck-ups. If something is wrong, it is incumbent on the company officer to recognize it, communicate it, and do the best that they can to change it. But always remember: problems need to travel up the chain of command…never down to the members of your company. The minute that you head back to the firehouse and remark about how useless a department training was or what a pain in the a** that old lady is when she calls for us, you’re inadvertently setting the stage for a negative-minded and complacent company. Be a professional. Your crew is watching, and they will emulate your actions.

Anyone who says that the fire department is the same as any other business either has never spent time in a firehouse or is simply sticking their head in the sand and being ignorant. We spend a minimum of 1/3 of our lives for 20 to 30 years with the men and women that we work with. People will get to know each other, talk about each other, spread rumors about each other, and all that other good stuff that you foolishly thought ended when you received your high school diploma. Again, it would be nice to think that those things didn’t happen in the firehouse, but let’s deal in reality: it does. So, the result on a company officer is simple: your personal affairs matter.

I read an old book very early in my fire department career that was published in the 1960s and covered basic information about what was required of company officers. After re-reading the book a number of times, I have come to a conclusion: the requirements of the position have not significantly changed in the past 50 years. The only thing that has changed is that people are afraid to say some of the things that need to be said. The topic of a fire officer’s personal affairs having an impact on their crew fits neatly into this category.

A fire officer is more than a role model for how to run a hoseline or how to force a door. Firefighters are entering the profession at 18, 19, 20 years of age, and many did not have the type parenting that the firefighters of generations past had the privilege of growing up with. In other words, not only will you be teaching your company how to fight fires, but you may be teaching them how to simply grow up to be good people. For generations, firefighters have been highly regarded as trustworthy, honest, hardworking individuals. Those values are ones to which we must cling tightly, and be sure to teach to those who may not have them, as they define not only the history of our profession, but the future of it as well.

So what does this mean for today’s fire officer? It means that you must pay as much attention to your personal life as you do to your professional life. To provide an example, I once worked for an officer who proudly cheated on his wife. How did we know? He bragged about it, he would make advances to female civilians while we were on calls, he had his girlfriends call the firehouse phone so his wife wouldn’t find out…you name it! You can imagine how much trust the crew had that the officer would stand up for them to a chief, or how much we believed and valued his feedback after a tough call.

I’m not the ethics police, and I certainly don’t care to have a say in how another person lives his or her life. But it’s important to understand that those types of decisions not only define the type of person you are, but define the amount of trust that your crew will place in you as you lead them a dangerous environment. After all, if an officer can go home and lie to his wife, what would make him be honest and forthcoming with the members of his company? Never forget that your personal decisions are under just as much scrutiny as your professional ones, and they will have just as much of an effect on your ability to lead a successful crew that will trust your decisions.

Stay tuned next month for the final installment of this post, which will cover topics such as leading from the front, how to encourage learning amongst your crew, and the importance of being a good fireground instructor as it pertains to the position of a company officer.

No Fireground Is Perfect