Tactical efficiency means getting the most accomplished, in a timely manner, with the personnel that you have on the fireground. As I've mentioned in previous posts, with the prevalence and abundance of synthetic fuels and lightweight construction, fighting fires in 2013 and beyond is, and will be, different than fighting fires in past generations. The enemy is more formidable and the battlefield is less forgiving...leading to firefighters having less time to accomplish their mission (life safety, incident stabilization and property conservation). These facts, in addition to many departments having limited staffing, lead to the fact that our tactics might also need to change. With the odds stacked against us from the beginning, we need to be smarter, faster, more proficient and more efficient on the fireground.

Suburban and volunteer departments can't operate the same way that larger, urban departments can operate; and 85% of fire departments in the US are staffed with all volunteer, or mostly volunteer crews. The vast majority of the fire service doesn't have 30-40 personnel showing up on their first alarm, and many have 10 or less (including my department). That begs the extremely important question of how best to utilize the firefighters that you do have. With the fireground having so many different responsibilities that need to occur simultaneously (attack, search, ventilation, rescue, RIC, command, pumping, supply, etc.), this question can be particularly difficult to answer. All too often, in departments across the US, besides the pump operator and IC, the RIC is the only crew outside the IDLH. How can we efficiently utilize our RIC?

Staffing and resources dictate tactics. That last sentence is important, so let me repeat that...staffing and resources dictate tactics! For a RIC (or whatever your departement calls it) to be efficient, they must think and act proactively, rather than reactively.We're all familiar with the old adage than 'an ounce of prevention is worth a pound of cure', and this is especially true with regards to RIC operations. The primary goal of the RIC should be to prevent a potential Mayday, while at the same time putting themselves in the best position to successfully mitigate an actual Mayday. 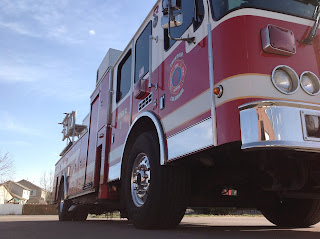 We all konw that the RIC needs to be ready to deploy to save fellow firefighters at a moments notice, but that doesn't mean they have to post up on the sidewalk on the alpha-side of the structure, waiting for something bad to happen. This seems to be how too many fire departments utilize their RIC, but we have to ask ourselves, 'is there a better way to utilize our RIC on the fireground?'...especially when our operational clock is being reduced and our staffing is less than adequate.

The RIC can, and should, work together to make the fireground as safe as possible for their brothers and sisters in the IDLH. We've all heard before that the RIC should be the most physically fit, knowledgeable and skilled members on scene...and I couldn't agree more. The RIC is tasked with saving firefighters...and this is no small chore. The RIC should be constantly looking and listening (continual size-up and monitoring the radio), constantly thinking ('what could go wrong?'), constantly planning (how can we prevent and/or solve problems when they arise) and constantly preparing (gathering tools and equipment for the worst case scenario). The duties of the RIC are numerous, and depending on the fireground priorities and staffing, might include:

- Throwing ladders (until the roof and all necessary windows are sufficiently covered, or until you run out of ladders)

- Horizontal ventilation (if it's to your advantage, and it's coordinated with interior crews)

- Locating and rescuing firefighters in need

A continuous 360-degree size-up should be mandatory for the RIC. While on scene the RIC needs to mentally "diagram" the fire building and mitigate any hazards that might be obvious from the exterior. The RIC should know where all crews are operating and should be cognizant of the actions that crews are taking to control the enemy and the battlefield. The RIC should recognize if the actions of the interior crew are having the desired effect on the interior environment and attempt to anticipate any problems for the interior crews before they arise.

Throwing ground ladders should be a given. Any time you have crews operating, or potential victims above grade, it is the duty of the exterior firefighters (in too many cases this means the RIC) to show their "Ladder Pride" by laddering as many rooms and sides (divisions) as possible. The RIC should be proficient with one-man (24', 28') and two-man (35') ladder throws, and should make sure the ladders are "self-heeled" to maximize crew efficiency. Throwing ladders, while a fundamental skill, is often overlooked.

Forcible entry is often only thought about, and taught, in the context of initially getting the truck or engine companies into the building, but we should also be thinking about forcible egress. All exterior doors need to be defeated and controlled (so as not to change the ventilation profile) to allow interior crews to make a hasty exit if need be. This is especially true on commercial properties, which are often secured with multiple locks, and in zero-visibility this task can be extremely difficult for the interior crews. 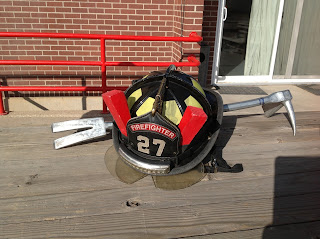 Softening the structure and enlarging pre-existing openings should go hand in hand with forcible entry/egress, since they all serve the same function...making egress for crews and potential victims easier.

Horizontal ventilation is another quick task (once in position) that can significantly increase the safety inside the IDLH (sounds like a paradox) when done in a coordinated manner with interior crews.

Getting a 2nd line or back-up/RIC line into position is another task that, with practice, usually takes less than a minute, and again, can considerably increase the safety of the fireground.

Loacating and rescuing firefighters in need...we'll talk about this in future blogs.

Ideally, all of us would have enough personnel to accomplish the above tasks in a timely manner without the use of our RIC, but this is, unfortunately, not the case for too many of us. So, we have to be as efficient as we can with our crews. With so many potential tasks that might need to be accomplished by the RIC (and we haven't even touched on the RIC duties once a Mayday is called!), I think I made my case for the RIC being the most physically fit, knowledgeable and skilled members on scene.

Changing from a reactive RIC, to a proactive RIC will oftentimes be met with resistance since it's a mindset that differs from what we've been taught...even the initial concept of a RIC was reactionary. This blog is designed to get you to think about different ways to make your crews work as efficiently, and as smart as possible. I'm not trying to rewrite your SOPs/SOGs, but I want you to think about your staffing and resources, and then ask yourself 'are we being as efficient with our crews as possible?' Like everything we do, these tactics and skills need to be practiced relentlessly, since these skills are perishable...so as always, let's go get sweaty.