Give them an inch, and they may take a mile

Give them an inch, they may take a mile

While growing up, I heard this phrase all too often “ We give you an inch, and you take a mile”. Most of the time this was because my curfew would get extended an hour, and I would show up three hours later. I used to just blow off the phrase and say “I know, I’m sorry, and it will not happen again”, but it often did. I was always taking that inch that was given to me, and stretching it as far as I could. Nowadays, I embrace this phrase and channel the “Mile” part in a positive way.

When new candidates begin a journey in the greatest profession on earth, they are   given the basic tools necessary to satisfactorily complete a task. Many times the academies just scrape the surface of what the actual fireground will look like. Many fire departments do not have a training facility like “The Rock”( FDNY ). Some departments do not have a training facility at all. For example:  During the academy we spend several hours talking about and performing forcible entry on props, and then expect our firefighters to be able to gain access to any door that we ask them to. Anyone who has been on the job for several years, will tell you that this basic level of instruction is nowhere close to teaching our firefighters all that they need to know regarding forcible entry. This holds true for any fireground task, which can then cause candidates leaving the academy with a feeling of false confidence. Although they are unaware of it at the time, they feel that they have been given the proper training and preparation to handle any job that is thrown their way. Here is an example of how a group of firefighters are addressing this exact issue of forcible entry. I read a recent post on Facebook from Irons and Ladders LLC, which stated that they were able to instruct the forcible entry class for the new academy. (If you have not been following Irons and Ladders LLC, I would highly recommen

d that you begin to). They stated that they forced almost 500 doors, and spent 24 hours of training on forcible entry. This type of training will put the candidate years ahead of many firefighters.

Now let’s take a trip down memory lane. Do you remember your first year as a firefighter? You were full of questions, and maybe at times were afraid of asking them, in fear of appearing incompetent. But, you would ask them anyway, and the answers would range from a five second response to a ten minute response. After months on the job it was easier to tell who actually knew what they were talking about. The person, who seemed to have all of the answers, may have been the senior guy, or the station captain. Regardless, this was the person that you found yourself going to when you had a question, and more importantly trusted and respected their answer. This person played a vital role in opening your eyes, and showing you just how big in magnitude the actual fire service is. This person shared their knowledge, because they knew that someday it would be you returning the favor to a new candidate.

For me, as a candidate, when I asked a question regarding a fireground task, I was given an inch of information, and would then take that inch and turn it into a mile. That inch of information may suffice for some people, but for me it was never enough. That initial mile has turned into an odometer that continues to turn, and will not stop until I stop. 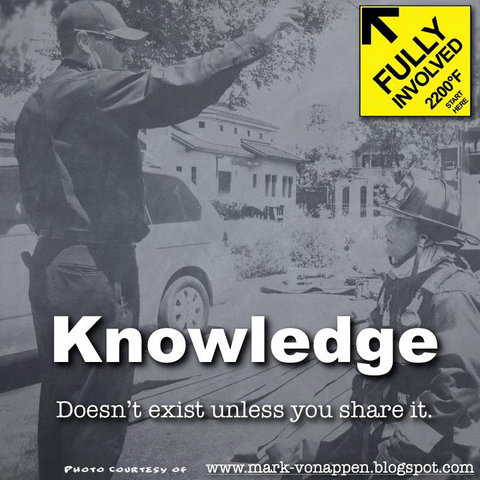 I made a promise to myself that I would share as much knowledge as possible to anyone who was willing to listen. I have seen this “inch into a mile” take off with new firefighters who are so eager to learn the craft.  When you open the door for that new firefighter and help them stretch that inch of information, you might get lucky and that inch will turn into that mile. The more firefighters that we have stretching that inch, the further everyone else’s mile will become. People will feed off of one another and strive for greatness. The craft of firefighting takes countless hours of dedication. We may never master the craft of firefighting, but we will work diligently in an attempt to reach mastery.

Here are some tips to aid in stretching the mile:

These are just several tips to help any firefighter stretch that mile. By investing a little time, effort, and quality leadership, we can unlock doors that will lead them to finding the drive and dedication that this profession requires. Remember the title to this blog the next time that any firefighter asks you a question. You may be the one to open their eyes to the magnitude of the fire service, and also inspire them to stretch that inch of information. Share your knowledge, as we are only as strong as our weakest link.